Thought for the day:  Sign at the electric company -- We would be delighted if you send in your payment. However, if you don't, you will be.

I think we all agree by now that English is a weirdo language. But, by golly,  at least we don't have to worry about what gender our nouns are. A noun is a noun is a noun, and if we put the in front of it, we're pretty much good to go. One word fits all.

Not so other languages. In Spanish, masculine nouns are preceded by el, and feminine nouns by la, but if any reasoning whatsoever went into the assignations of gender, it isn't readily apparent to me. I mean, in Spanish, dress is masculine ...  and necktie is feminine. Go figure.

Ditto French. They also use la to denote feminine, but do a switcheroo on the Spanish  el to use le for masculine. And as Cro, who actually lives in SW France, mentioned in his comments the other day,  the French word for beard is feminine, while the word for handbag is masculine. Again, go figure.

Know what's worse? The German language isn't satisfied to merely designate two genders. Oh no, they have to throw in a neuter as well. A precedent of der denotes masculine, die denotes feminine, and das means neuter. And to stir things up a bit, they sometimes have different words ...  of different genders ...  for the same object.

Other languages assign gender to words, too, but I believe I've already made my point. So, are you English speakers feeling linguistically sex-deprived now? Wouldn't it be fun if we could intuitively assign gender to our nouns, based on the characteristics of the objects they describe?

Reminds me of a joke I heard a few years ago. A high school Spanish teacher was teaching her class about noun gender, when one of her students asked about the gender of the word computer. So, just for fun, she split the class into two groups, one all male and the other female, and told them to decide the issue based upon the characteristics of computers. Their reasoning follows.

Why Computers are Male (according to the girls)


Why Computers are Female (according to the boys)
So, whatcha think? Are computers male or female?

Before we go on to this week's weirdest news stories, one final word on our strange language. Good friend Bill sent me the link to a great clip, and I think you'll enjoy it, too. It shows Gallagher talking about the English language, in a piece called "Messing With Your Mind."

Weirdest News Stories of the Week

***  It isn't unusual for couples to adopt, and it isn't unusual for parents to let their offspring share their marital bed, either. But the "baby" French couple Pierre and Elianne Thivillon adopted thirteen years ago, who still shares their bed each night ... is a gorilla. Both parents are zookeepers with experience working with gorillas, so when baby Digit's mother wouldn't care for him, it was only natural that they'd consider taking him home. But their adopted baby now weighs 265 pounds. (I hope they have a king-sized bed!)

***  It's terribly annoying when a neighbor repeatedly allows his pooch to use your yard as as its own personal potty, isn't it? It's annoying to a New Hampshire apartment complex owner, too. The plentiful piles of poo were ruining the aesthetics of her lovely complex, doggone it, so she decided to do something about it. Residents have until today to submit pet (ahem) samples, so she can use them to set up a doggie DNA file. That's right. From now on, when an unpleasant mound of manure is found, she's gonna test the dog doo DNA to reveal the inconsiderate culprit. She doesn't yet know what she's gonna do once the doo is identified. Perhaps a fine, she says. (How about lighting a paper bag of "evidence" outside the offender's door?)

***  For the first time ever, there will be a separate ladies only competition at this year's July 4 Nathan's Famous International Hot Dog Eating Contest in Coney Island, New York. While women have competed against men in the past, and 105-pound Sonya Thomas even managed to out-eat 230-pound Joey Chestnut, women will undoubtedly have a better shot at winning their own separate $10,000 prize by going stomach to stomach with other gluttons of the fairer sex. Another female competitor, Juliet Lee, who has also occasionally bested male eaters in the past, hopes to beat her personal best of thirty-four dogs in this year's competition.

***  A 24-year-old man was arrested in Florida for smoking a marijuana bong. No big deal, you say? He was caught in the act while driving a van filled with precious cargo. With him were five children, ranging in age from one to six years old. Yeah, I know driving a bunch of kids around can be stressful out the wazoo, but did this dude even give aromatherapy a chance?

***  No, that horse in the picture isn't using the ground to scratch himself. I'm pretty sure he's laughing himself silly. And that's because he heard about what's going down in Wellington, New Zealand. Green Man Pub is offering a new drink to its clients, and word has it, men and women alike have been throwing 'em back and living to tell the tale. The drink? Horse semen shots. I kid you not. Each chilled shot contains approximately 300 million sperm, (I trust no one's actually counted the little boogers) and is tinged with a slight apple flavoring. The owner says the sticky drink isn't much of a sipper, so it's best to gulp it down in one big swallow. As for what these people hope to gain from drinking this, I haven't a clue, but it does give a whole new meaning when you hear someone in that bar say they're gonna "see a man about a horse."


Sorry to leave y'all with a bad taste in your mouth. (Think ice cream.) Until next time, take care of yourselves. And each other. And have a real bang up fourth of July. 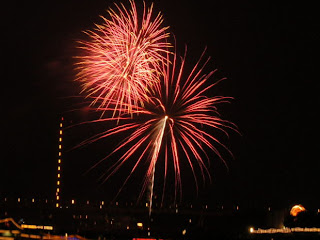 Posted by Susan Flett Swiderski at 6:00 AM