So, what do you associate with Kansas? Storm cellars and tornadoes, maybe, thanks to The Wizard of Oz? Sunflowers? Oh, and wheat. Lots and lots of wheat. Kansas is actually tops in the country's wheat production, and their Sumner county touts itself as the Wheat Capital of the World. Gotta have something to go with all that bread, right? No problem. They've got it covered. The state is second only to Texas in beef cattle. Another thing the state has had in abundance, but prefers to do without,  is grasshoppers. Matter of fact, when the First United Methodist Church was built in Hutchinson in1874, the grasshopper plague was so horrific, thousands of the little buggers were mixed right into the mortar. (Giving the church a "green" foundation long before it became cool.)

Couple other interesting tidbits: The first national burger chain, White Castle, opened in Wichita in 1921. That's also where Pizza Hut opened its first location. Going back nearly fifty years earlier, to serve railroad travelers, Harvey Houses, the very first restaurant chain in the country, opened in Leavenworth in 1876. And according to one source, the state (ready for this?)  banned fog in 1793. Yeah, fog. I could understand frogs and grasshoppers, what with the plagues and all that, but FOG? Wonder how that's gone so far ...

Yeah, yeah, yeah, that's all well and good. (And about as cut and dried as a field of wheat.) How about some cool stuff? 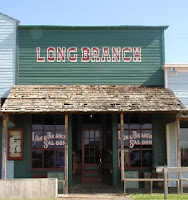 Remember the Long Branch Saloon on the TV show Gunsmoke? A saloon with that name really did exist in Dodge City in the 1880s. William Harris, one of the saloon's original owners, hailed from Long Branch, New Jersey. Ergo, the name. The saloon can still be seen today at Dodge City's Boot Hill Museum. (Alas, I don't think you'll find Miss Kitty behind the bar.)


Talking about Dodge City, ever wonder where the term "red light district" came from? Yup, you guessed it. Dodge City. There was a Red Light Bordello located there, and its front door was made of red glass. When the interior lights were lit at night, the glass produced a distinctive red glow. Eventually the term carried over to include the town's entire brothel district. (See what valuable information you get here?) 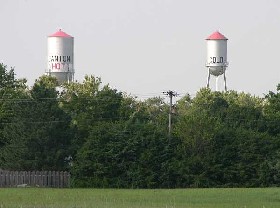 Who says Kansas doesn't have a sense of humor? Not me! Check this out. Would you believe "hot" and "cold" water towers? The town of Pratt, Kansas erected theirs in 1956. Evidently, the folks in Canton got the joke, because they followed suit. That's the Canton towers in the picture. 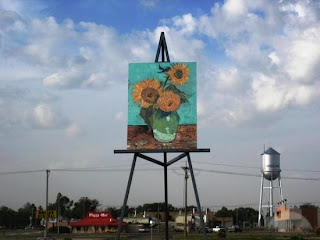 Now, this is totally cool! Located in Goodland is the world's largest easel, standing eighty feet tall, and constructed of forty thousand pounds of steel. It holds ... what else? A giant replica of Van Gogh's painting, Sunflowers. 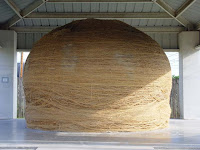 While we're talking about the "world's largest," how about the world's largest ... ball of twine? You betcha. Located in Cawker City, this ball is thirty-eight feet in circumference, weighs seventeen thousand pounds ... and is still growing. 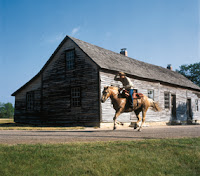 The Hollenberg Station, near Hanover, is the only original Pony Express station still standing in its original location. It is now a museum.

In the years following the Civil War until 1880, approximately forty thousand black people left the South to settle in Kansas, a wave of immigration known as the Exodus. These settlers built numerous all-black towns, only one of which remains today: Nicodemus. Although virtually a ghost town now, Nicodemus is a National Historic site. (An interesting corollary: Kansas was the first state to ratify the fifteenth amendment ... giving black men the right to vote.) 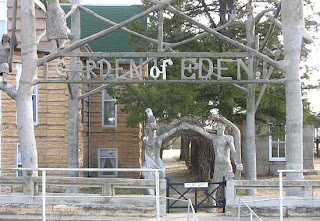 Civil War veteran S.P. Dinsmoor used more than one hundred tons of concrete to build Garden of Eden, which you could say is a folk art paradise in the town of Lucas. The buildings, sculptures, fencing, everything here ... including the flags ...  are made of cement. Mr. Dinsmoor started his heavy project (sorry) in 1904, at the age of sixty-four. Not sure how long it took him to complete it, but it was no short-term undertaking. He was one tough dude.


Okay, let's get on with it. Let's take a gander at some of the laws still on the books in fine state of Kansas.

Okeydoke, it's that time again. Time for (ta-DA!) 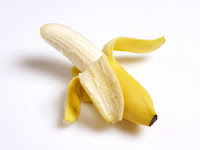 *** Killer bees, killer sharks, man-eating tigers, and killer tornadoes. Betcha you've heard of all those things, but have you heard of the dreaded ... killer banana? An epic email hoax about flesh-eating bananas made a real monkey out of shoppers in Mozambique. I'm telling ya, the alleged news story didn't just go viral; it went bacterial. The bogus email warned of a virtual invasion of necrotising fasciitis-infected  bananas from South Africa. No matter that no bananas were actually infected. No matter that Mozambique doesn't even import bananas from South Africa. Mozambique shoppers simply stopped buying bananas, until the health minister finally convinced frightened non-consumers that they were in absolutely no danger from rogue bananas. Just goes to show you ... some people ... many people ... will believe anything they read in an email if it's written with just the right tone of authority.

*** Beauty, and art, are in the eye of the beholder. Everyone's heard of Picasso, but I'm gonna tell you about another artist, a British artist who's known by some as Pic-cars-so. This 28-year-old, whose real name is  Ian Cook, drives his fine arts degree down a whole new avenue. In a nod to his love of motor sports, he covers radio-controlled cars in paint, and then uses them to create what some say are wheely good works of art. He's frequently commissioned to paint in front of an audience, and has been generating up to one hundred, usually car-related, pieces per year. His most famous was done several years ago, when he was commissioned by Reebok to paint a three-story portrait of Formula One driver Lewis Hamilton. More than 17,500 people came to the temporary studio to watch him work on it, and the final product was displayed near the tower bridge in London. I'd say this young man is well on the road to success.

*** I think it's safe to say that most people love the water. Love water parks, too. Because it's good clean fun, right? Evidently, a tourist couple visiting a water park in Poland weren't entirely satisfied with the level of fun to be found on the park's giant water slide. Guess they wanted a little something more. So they improvised. Observers say it took them a good five minutes to prepare to launch down the long blue water slide, and when they finally achieved take-off, they'd already taken off their suits. And the woman was, shall we say, sitting on the man's lap. The thing is, security cameras caught them in the act, and when the amorous pair reached the bottom of the slide, attendants dampened their sizzle with buckets of cold water, and booted them from the park. Minus their clothes. On the plus side, that couple won't have to send postcards to their family and friends to let them know what they did on their vacation. Their picture made quite a splash throughout the European media, and can be found online with a simple google search. (Won't their mothers be proud?)

Posted by Susan Flett Swiderski at 9:10 AM