Thought for the day:  MGs don't leak oil; they mark their places. 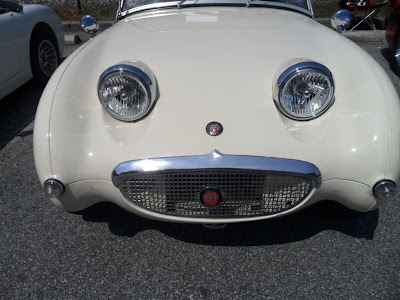 Dontcha love the front of this car? If I were more clever, I'd doctor the picture to make it look even more like a smiling face. No matter. When Smarticus and I went to the British Car Fayre in our town last weekend, we saw plenty of real smiling faces. And plenty of extraordinary British cars, too.

For those of you who have never had the pleasure of owning a British car, but want to know what it's like: Next big rainstorm, wait 'til dark, roll down all the windows, leave off lights and heater and wipers, and go for a drive. Stop at every intersection and throw out a twenty dollar bill. It's not exactly the same, but it's real close.  [Mike Nash] 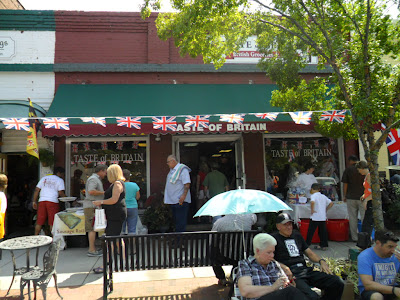 We evidently have plenty of anglophiles and UK ex-pats living in our area, because this annual car show, sponsored in part by the loverly Taste of Britain always draws a fine array of vehicles and visitors. Lots of Triumphs, Rolls Royces, MGs, Morgans, Austin Healies, Astin Martins, Lotuses, Minis, Range Rovers, Bentleys, Jaguars, motorcycles, and more. A bunch of drool-worthy vehicles. But not a single Delorean! Can you believe that? 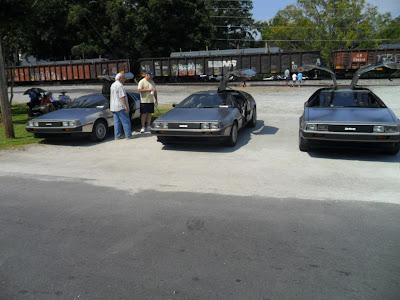 Nope, not a single one; there were three! Sitting side by side by side, they were quite a sight to behold.  (But if I can't have it in red, I don't want one...) 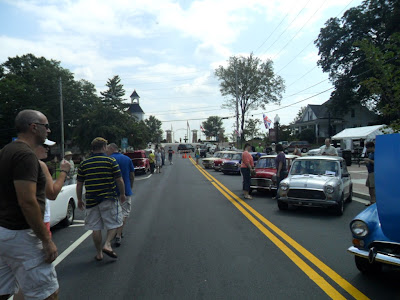 One street was pretty well lined with Minis. Some of them are reeeeally... mini. You hear the one about the trouble with bucket seats is we don't all have the same size buckets? Well, I know some people who'd have a hard time fitting their impressive buckets into some of these Minis. Pulling them out of one of these cars would sound like a champagne cork popping.

But, if a fella can't fit into a small car, there are always other ways around it. Right, Mr. Bean? 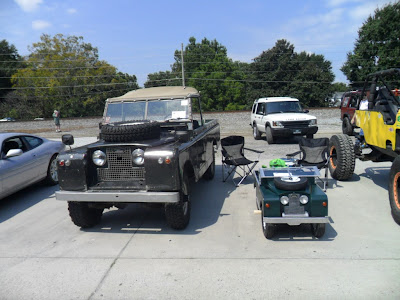 There were quite a few Land Rovers, too. These two cracked me up. One for Dad... and one for Junior. 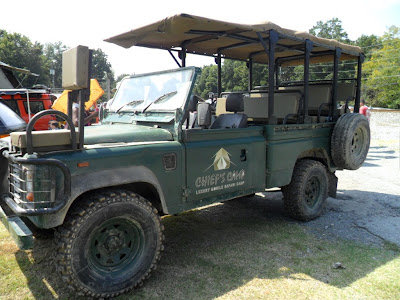 Hey, you never can tell when you might have an opportunity to go on safari in Atlanta. Heck, everyone knows the traffic here is like a jungle, and some of the drivers are real... beasts.


Much to my surprise, there were even a couple Fords in the show. Huh, how 'bout that? It seems some of them are made in Britain, too? For sure, we've never seen a Ford commercial in the U.S. that comes even close to being as funny as this British one: 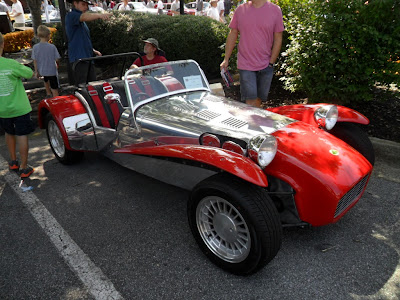 Anyone who's familiar with a Lotus will recognize that this one stands out from the pack. Its front end reminded us of a Prowler. 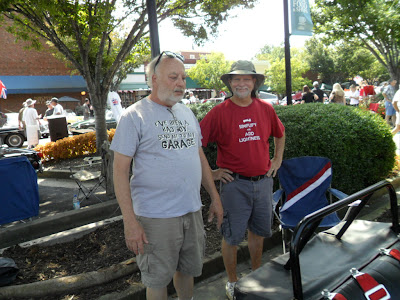 Doggone if we didn't know its owner! Actually, we knew his now-deceased parents better, but we recognized the Montgomery name, and then recognized him, so of course, had to stop and chat for a bit.

In case you can't read it, the writing on Smarticus' shirt says: I've been a bad boy. Send me to my GARAGE. (HA! Isn't that perfect? A big thanks and a tip of the hat to our Tennessee pals Kati and Cliff.) 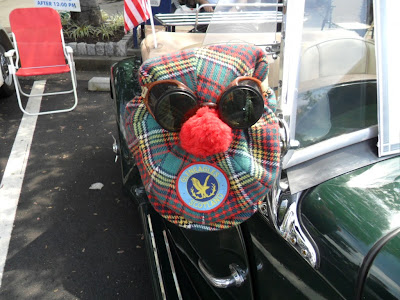 Aye, and there were bonnie brogues to be heard, and evidence of a wee bit of Scottish humor.

(The patch on that hat says Gleneagle, Scotland.) 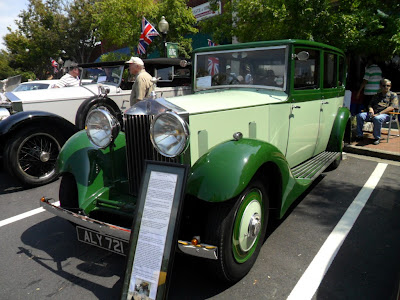 Check out this 1933 Rolls Royce. Its owner had a good sense of humor, too. Know how I could tell? By what I saw sitting in the back seat... 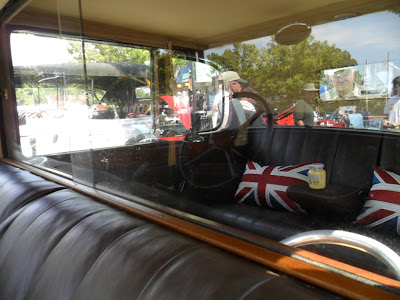 Pardon me, but do you have any Grey Poupon?


A GT6 pulled alongside a Rolls Royce at a traffic light. "Do you have a car phone?" its driver asked the man in the Rolls.

"Of course I do!" came the haughty reply.

"Do you have a fax machine?"

The Rolls owner sniffed. "I have that, too."

"Do you have a double bed in the back?" the GT6 driver wanted to know.

With an annoyed frown, the Rolls driver sped away, and that very afternoon, had his mechanic install a double bed in the back of his car.

A week later, the Rolls driver spotted the GT6 at the side of the road with its back windows fogged up and steam pouring out. He pulled over, got out of his car, strutted up to it, and and pounded on its rear window. "I say!" he yelled. "I want you to know I had a double bed installed!"

The GT6 driver rolled his window down and frowned. "Bloody hell!" he said. "You got me out of the shower to tell me that?" 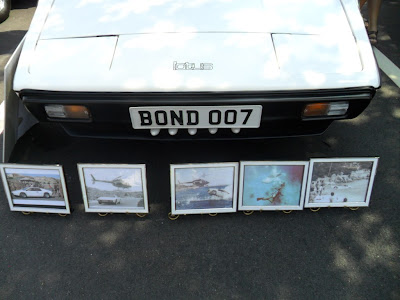 How about this one? Anybody see the movie featuring this car? 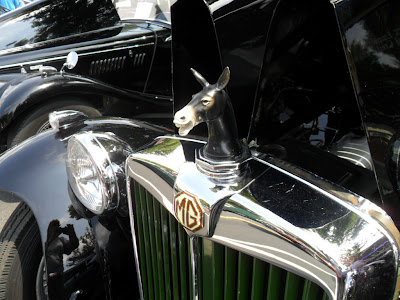 Wouldn't this hood ornament be absolutely perfect for our rat rod? I mean, Smarticus and I do practice a certain amount of smart assiness from time to time.

I took lots more pictures, but rather than bore you with them, let's take a brief look at another part of this car show. A surprising part. At least, I don't remember seeing it at the show in past years... 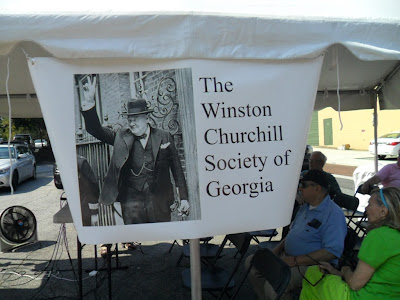 How about that? Who knew Georgia had a Winston Churchill Society? Not I! So in honor of the great man, I'll leave you with a smattering of some of his many famous quotes:

Until next time, take care of yourselves, old beans. And each other.