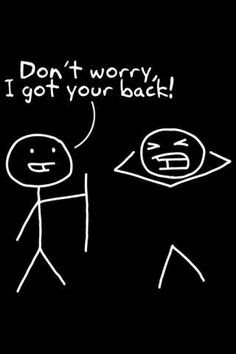 Thought for the day:  A mother is a person who, seeing there are only four pieces of pie for five people, promptly announces she never did care for pie. [Tenneva Jordan]

It's true. Mothers have a distinct way of making little, often unnoticed sacrifices. When food is running low, they aren't hungry. When one of the dinner plates is chipped, it always manages to find itself in front of her spot at the table. If her children need shoes or clothes or glasses, she decides her own, no matter how old or shabby, will do just fine. It's simply what they do. They have our backs... and cover our butts.

With Mothers' Day coming up this Sunday, I thought it was a good time for me to be lazy re-run one of my favorite posts about mothers. It originally ran in 2011 as Mothers Cover Our Butts, and the following year, it ran again as Still Covering Our Butts. My brother informed me that our grandparents didn't actually enter the U.S. via Ellis Island; they came into Boston. (oops!)  But regardless of their entry point, the rest of this story is absolutely true.

To all of you moms out there, I wish you a fantabulous weekend.  If your mother is still with you, be sure to give her an extra big hug and let her know how much you appreciate her.

Thought for the day:  If it's not one thing, it's your mother... 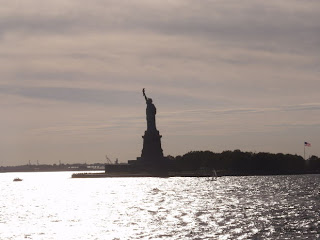 With Mother's Day right around the corner, I'd like to share a story about my grandmother. In early 1923, she, my grandfather, my father and his brother left Scotland and set sail for the United States, essentially abandoning the only home they'd ever known so they could sail off into the great unknown and start all over again. Must've been scary, don't you think? A huge sacrifice. But like countless other immigrants, facing the unknown was a sacrifice they were absolutely willing to make for the sake of their children and their children's children. NO sacrifice was too great, right? Then again, the (ahem) naked truth is, by the time they reached the United States, poor Mom-Mom learned that she'd sacrificed more than she'd ever intended.

Try to picture it. Can you imagine how everyone on that ship must have felt when they finally caught sight of Lady Liberty for the first time? My guess would be intense excitement and pride, mingled with a shot of apprehension. Probably a good deal of relief, too, not to mention exhaustion.

For Mom-Mom, I have a hunch relief was tops on her emotional menu. Relief that the seemingly endless trip was finally coming to an end, and relief at the prospect of standing on dry stable land again. Because my poor grandmother pretty much puked her way across the Atlantic. From the time they left Europe, she had such debilitating seasickness, she rarely left her bed.

Which left Pop, a rather dour Scot, in charge of the kiddies.

My father was still in diapers at the time, and though Pop, a master carpenter, was quite skillful at building a custom cabinet, he wasn't at all accustomed to being saddled with the business of childcare. So he improvised. He blithely tore up my grandmother's clothes and, one by one, used them to diaper my father's bottom. When a diaper got dirty, he simply tossed it overboard and reached for another dress.

So by the time the Statue of Liberty came into view, a long trail of improvised nappies stretched clear across the ocean, and my grandmother? Let's just say that she came perilously close to being one of those naked masses yearning to breathe free, with few clothes to her name beyond those she'd been wearing in her sick bed.

Years later, when Mom-Mom told me this story, she was laughing, but I doubt if she found much humor in it back in 1923.  Trust me, Pop paid for his blunder, though. As I remember her, my grandmother had an extensive wardrobe from some of the best stores in Baltimore. 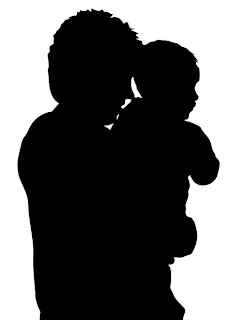 Your mother is always with you. She's the whisper of the leaves as you walk down the street, she's the smell of bleach in your freshly laundered socks, she's the cool hand on your brow when you're not well. Your mother lives inside your laughter. And she's crystallized in every teardrop. She's the place you came from, your first home; and she's the map you follow with every step you take. She's your first love and your first heartbreak, and nothing on earth can separate you. Not time... not space... not even death.

Sorry. I wish I did, but I don't know the origin of that little piece. Someone sent it to me without attribution many years ago. 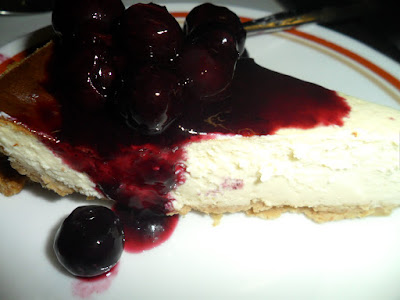 For those earlier Mothers' Day posts, I included a recipe for some fabulously delicious strawberry pie that my mother used to love. It's still fabulously delicious, and if you want it and don't mind using a good bit of sugar, you can still find it by checking out the tag words in the side bar, but I'm gonna share something different with y'all this time around: an unbelievably good recipe for sugar-free cheesecake with sugar-free blueberry topping. It took me a number of experiments and a good bit of ingredient-juggling to come up with something that reeeeeeally works, but I promise, you will NOT be able to tell the sugar is missing.

Okay, first, the crust. That's the easiest part, if you wanta be lazy smart. Buy one of those extra-serving graham cracker crusts. Yeah, there's some sugar in them, but not enough that I worry about making the crust from scratch. If you'd rather make your own with or without sugar, go for it.

Now, the filling. Plop two packages of Neufchatel cheese into a bowl and let it come to room temperature. (Or you can use regular cream cheese, or reduced fat cream cheese, but the Neufchatel is lower in fat, costs less, and works well.)  While you're pulling the cheese out of the fridge, pull out four eggs and let them get closer to room temperature, too. Or not. If you'd rather just use the cheese and eggs cold, go for it. No skin off my nose. It's just a little easier to work with after they've warmed up a bit.

When you're ready to start, add 1/4 cup of Truvia (a non-caloric natural sugar substitute made with stevia leaves) to the bowl with the cheese, and blend well with an electric mixer. Mix in a tablespoon of flour and a teaspoon or two of vanilla extract. (to taste) Beat in the eggs, one at a time. Then blend in a cup of sour cream and pour the mixture into your pie shell. Bake at 350 degrees for about 45 minutes. To prevent the top from cracking, put a pan of hot water on a lower shelf in the oven.

While your cheesecake is baking, you can whip up the topping. Put 1/4 cup of water and 2 tablespoons of Truvia into a saucepan and bring to a boil, stirring frequently. Add 2 cups of fresh berries. (It's good with 2; even better with 3.) Lower heat and continue cooking until it ... looks like blueberry topping. (About three minutes, tops. You COULD add a tablespoon of arrowroot or cornstarch to thicken the topping, but I think it's fine without it.) Other options: If you happen to have a fresh lemon in your fridge, squirt a little bit of juice into the pan to add a little pop of citrus. Also, if you're a big fan of cinnamon and/or nutmeg, you can add a pinch of one or both.) Remove from heat, and add another cup of fresh berries. Chill. The topping, that is. Well, I suppose you could chill, too, because you're gonna have to wait a little while until you can sink your teeth into the cheesecake. It's best served chilled. 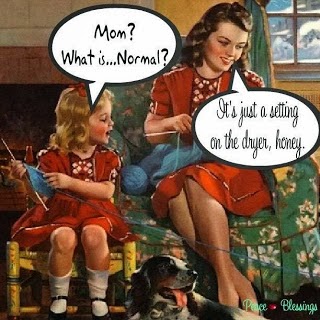