Fun in the Sun

Thought for the day: If there is magic on the planet, it is contained in water. [Loren Eiseley] 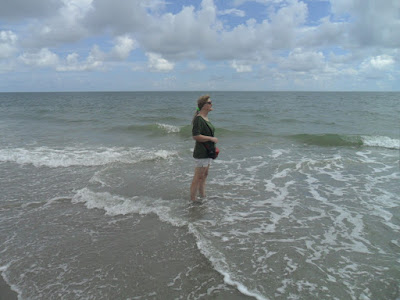 There's something about the beach, about its salty scent, cawing gulls, and constant soothing rhythm of the waves that centers me and gives me peace.

There's also something about our grandchildren, about their boundless energy, giggles, smiles, and overall silliness, that does the same.

Put them together and you have a little piece of watery heaven. If only I could bottle that feeling... I could call it... Happiness.

Our long weekend with our older son and his family was absolutely glorious, albeit much too short. The Gulf Coast was oppressively H-O-T, but the water... aaaaah... the water was perfect. And therapeutic. We spent most of our time playing in it, but I did came out long enough to snap a few pictures when they started playing in the sand. 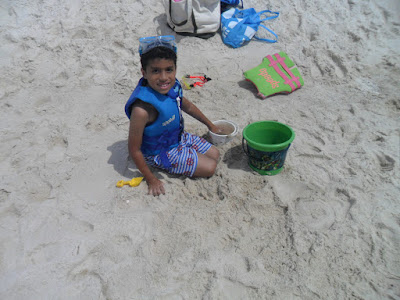 Aaron is our unabashed Sheldon Cooper-like smartie. When we were back at the house, he and I played some of the new games purchased at the going-out-of-business sale held by Toys r Us. The games were new to him, but he learned them quickly, and had absolutely no shame about beating his poor grandmother. 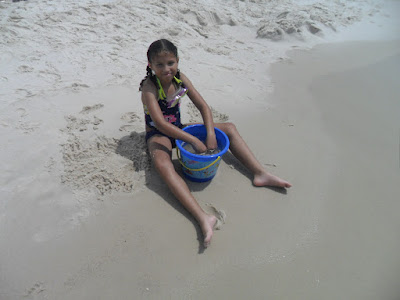 Kymber's a girly girl who has already been in a beauty pageant. (Once was enough for her, though. She's done with all that, she says.) She's a smartie, too, and very wily. Definitely knows how to get her way. 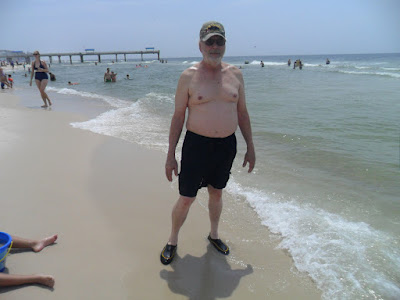 Smarticus... the biggest kid of all. 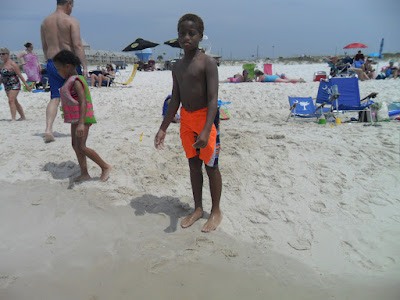 Looks like Jaiden is about to run back into the water. No surprise there, because he's quite the waterbug. That little cutie to his right is Devyn, who's the youngest of the crew, but also the boss of 'em all. She's going to rule the world someday, the little stinker. 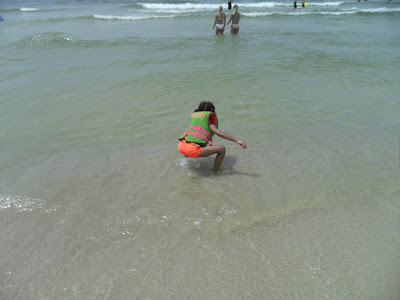 Here's Devyn again. I reckon she was probably ordering the water to Calm down! Even the smaller waves had a way of catching her in the face when we were out in it. 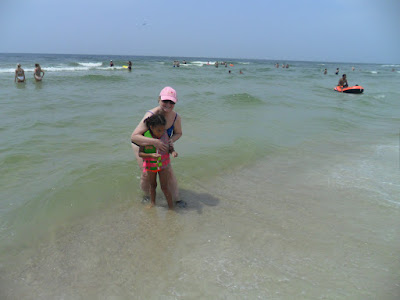 Smarticus grabbed the camera and I grabbed Devyn so we could get at least one pic... almost... of her face. You'll have to trust me. She's adorable. Not that I'm biased or anything. 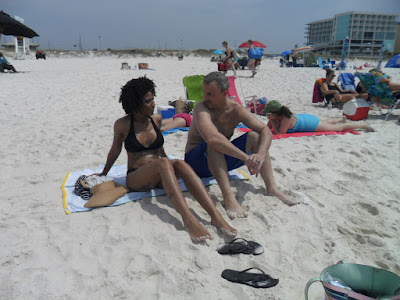 Our son and his lovely bride. (He's got a helluva lot of nerve having gray hair, doesn't he?) 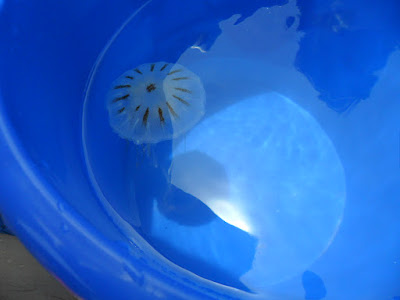 Our son scooped up a small jellyfish in a bucket so the kids could get a closer look. In the bucket, it wasn't nearly as menacing-looking to them as the ones we encountered floating in the water. This little guy's tentacles were very short, too.

That's it. That's all the pictures I took this time around. What can I say? It's a lot more fun having fun than it is to waste time recording it for posterity. HA! Profound, eh?

P.S. The header picture was from an earlier visit, when we went to the Gulf so Grandma could get her feet wet. The kids got soaked. (Not my fault!) So we had to buy them all dry outfits before we could continue on to the museum in Pensacola. Lesson learned! We all wore bathing suits this time around.