Thought for the day:  The other day when I was walking through the woods, I saw a rabbit standing in front of a candle making shadows of people on a tree.  [Stephen Wright] 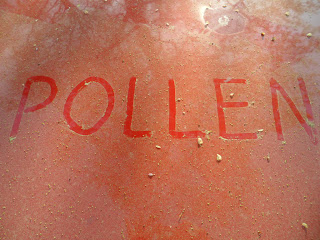 It's that time of year again. As I type this, it's March 20, the first official day of spring. HA! As if the calendar meant diddly squat to Mother Nature. I can tell you, without doubt, spring unofficially blustered into Georgia weeks ago.

Record high temperatures in the mid-eighties.

And wipe your eyes and blow your noses ...record high pollen counts coming atchoo, too. Yesterday hit a staggering 8164 particles per cubic meter of air, which tops the previous record by more than 2000. Believe me, that's nothing to sneeze at. So to speak.

Yep, it's deja-choo all over again. Atlanta is a beautiful place in the springtime, as long as you don't mind shoveling pollen and chewing every breath you take. Ah well. On a Claritan day, you can see forever. And on the bright side, I'm expecting the crime rate to plummet. Everybody's too busy sneezing to be bothered with criminal activites. And this is just the beginning. The calendar says so. 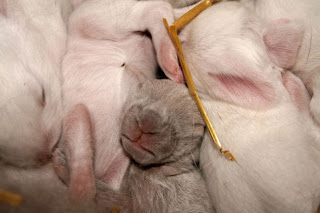 A couple weekends ago, my husband and I spent the day with our son and his family in Alabama. My daughter-in-law decided she wants to get each of the children a baby rabbit, so my hubby and son spent the day making a huge cage for them.

"Uh-huh," my DIL replied. "Three for the big kids, and one for me. When Devyn gets a little older, the fourth one will be hers."

"You planning on putting partitions in that cage?" I asked. "Y'know, to keep four from turning into forty?"

It isn't easy to differentiate baby bunny gender, but we'll see how well that turns out. As for me, I'm pollen for a happy outcome.

Okay, no more deja-choo or pollen nonsense, but how about a little deja-vu? Thinking about our grandkids and their soon-to-be pet rabbits reminded me of a post I wrote last April, entitled Lessons From a Killer Rabbit. I decided to toss it atchoo (sorry ... last time, I promise) again for those of you (most of you) who missed it the first time around:


Thought for the day:  The Energizer Bunny was arrested. He was charged with battery,

Got an early wake-up call of the wild this morning.

﻿
﻿ It was a woodpecker,  imitating a miniature jack hammer on the tree outside our bedroom window. His serenade only lasted for about fifteen minutes, but his presence reminded me of another wacky woodpecker who spent the entire summer here some years back. In fact, he was here so much we gave him a name. We called him Clem.

Now, I've been told that male woodpeckers pound out their jazzy rhythms in the early hours of the morning in order to attract a mate. Don't know it that's entirely true or not, but let's say that it is. And if it is, poor old Clem was sorrowfully unlucky in love.

Because he didn't just show up and rat-a-tat for fifteen minutes just before the sun came up. Oh, no. Clem was an industious and rather desperate suitor, and showed up several hours before daybreak, and rat-a-tatted his heart out for one or two hours every morning. On trees. On the gutters. On a fiberglass canoe. If it wasn't moving, our little visitor took a whack at it. If nothing else, he was persistent. But, alas,  I don't think he ever found love. He eventually stopped coming around, but  I fear the crumpled zig-zag beak he must have had held little appeal for the fairer sex.

Back to this morning. After the woodpecker finished his drum solo, the cats took over. If you have cats, I'm sure you're familiar with the routine. There's the piling-on game, the nose-rubbing and purring-in-your-ear game, the patty-cake game, and let us not forget the rousing round of king of the mountain, where you, of course, are the mountain. All designed, of course, to get their staff out of bed and into the kitchen.

I took all of this as an omen that it was time to write another blog about lessons I've learned from our pets. We've already talked a little bit about cats in the past, and about fish, but today, we're going to talk about rabbits.

Let me preface the lessons learned with a lesson of a different kind, a history lesson. About Jimmy Carter and the killer rabbit. 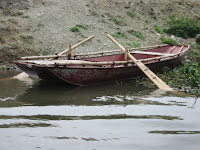 In 1979, President Jimmy Carter went fishing in Plains, Georgia. While out in his row boat, enjoying a peaceful respite from the White House, his serenity was shattered by a rabbit and a pack of dogs. The dogs were doing what dogs do. They were chasing the rabbit. But this rabbit didn't do what one would expect a rabbit to do. This rabbit jumped into the water, hissing and gnashing its teeth, and swam towards the president's boat. Though the president said he didn't have any experience with out-of-control animals, he successfully shooed it away by splashing water at it with a paddle. As you can imagine, if you don't already remember the incident, the media had a field day. "President Attacked by Killer Rabbit" was a common headline around the country. Late night comics took the story and ran with it, and poor President Carter became a laughing stock. If you do a google search now, you can actually find pictures of the rabbit, and of President Carter shooing it away from his boat, but they weren't made available at the time. But I, for one, didn't need to see any pictures to believe the president's story, because I'm pretty sure we ended up with the spawn of that killer rabbit. 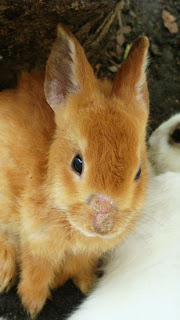 My daughter had a pet rabbit. It was a precious little bit of fur with a tiny pink nose when we first brought it home, but here are some of the lessons we learned from owning that rabbit:


I don't remember what our daughter called that rabbit. Something cutesie like Fluffy. But after a few weeks of shoveling his poop, I started calling him Hoodles, and that stuck. Oh, and on second thought, maybe he wasn't related to President Carter's rabbit, after all. When we tossed him into the lake, he didn't swim.

Just kidding. We ended up donating him to the Yellow River Game Ranch, where he lived out the rest of his life with a bunch of other rabbits, eating, generating hoodles, and ... um... multiplying.


Until next time, take care of yourselves. And each other. Oh, and I know some people have rabbits that make wonderful pets. My sister-in-law had one. Ours, however,  wasn't the cuddly type. And I might have mentioned? He had very sharp claws.

+++
No trees were killed in the sending of this message. However, a large number of electrons were terribly inconvenienced.
+++

I hope you enjoyed the re-run. For some reason, the song Doing What Comes Naturally is running through my head. Maybe because rabbits typically do a LOT of what comes naturally? Maybe we'll get lucky. Maybe our grandchildren's bunnies will be all the same sex. Or maybe doing  it won't be so natural to them at all.