Give a Friend Crabs

Thought for the day: I have an answering machine in my car. It says, I'm home now. But leave a message and I'll call when I'm out.  [Steven Wright]

Okay, WE don't have an answering machine in OUR car, but now that we're back home, let me share a little bit about our time away.

First, it's entirely untrue that my husband and I ate our weight in crab meat while we were in Maryland. Not that we didn't TRY, mind you, and since we're such fair equal opportunity eaters, I'll have you know we gave ample time and belly space to crab cakes, soft crabs, steamed hard crabs, and several varieties of crab soup.

Not saying the reason we went to Maryland was to stuff ourselves with seafood, but, well, we're no fools. We're there? By golly, we're gonna support the local economy and EAT it.


Several Baltimore eateries were featured on TV's Diners, Drive-ins, and Dives shortly before we headed up that-a-way, so we made a point of visiting one of them while we were there... Broadway Diner. Wow. I repeat, WOW. This place is only a distant cousin, several times removed, from the slightly disreputable greasy spoon trucker hang-outs that used to line Route 40 when we were kids. It may have the iconic streamlined chrome look from the outside, but this place is much larger, much flashier, much hipper than any ol' diner-next-to-a-cheesy-motel ever hoped to be. Lots of tables and comfy booths. Little booth-side jukeboxes. (Remember them? 'Course, instead of nickels and quarters, these babies require greenbacks.) Great service, great ambience, a happy hum from a hungry crowd, but not an exorbitant wait. But the greatest thing about this place is its food. I kid you not, they served me the world's BEST sandwich ever. Called the ultimate grilled cheese, it was made on thick slabs of scrumptious brioche with four (Count 'em, FOUR!) different kinds of cheeses. The kicker? A generous layer of well-seasoned lump backfin crab meat. No kidding. The BEST. My hubby had the Chesapeake burger, made of Angus beef ... in itself top-notch... but it ALSO had a layer of that perfect-tasting crab meat. Quite a culinary experience. A bit pricier than our usual luncheon fare, but worth every penny. PLUS we got to see a bunch of cool pics from Guy Fieri's visit to the place. Wanta peek at some? 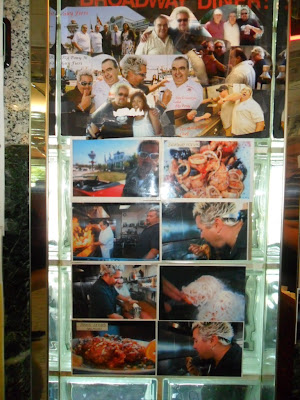 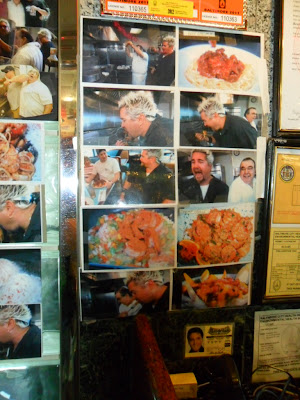 It isn't as though we don't eat seafood when we're at home, ya know. Even in a landlocked place like Atlanta, it's possible to find quite a decent variety of it. Even live blue crabs. Matter of fact, a while back,  I went to the doctor for one of those regular kinda check-up visits, and afterwards, stopped at the market across the street from the medical center to see what kind of seafood goodies were available. On the way home from there, I gave my hubby a call via amateur radio and told him something along the lines of, "I'm out of the doctor's, and I got crabs!"

Yeah. As you can imagine, I took quite a ribbing from our radio buddies over THAT one. (Now, if I want to give hubby a message about getting crabs, I say, "I got the Motts!")

In addition to tons of seafood, it's entirely possible that I ate a lot more sweets than usual while we were in Maryland, too. Lemon meringue pie. Smear cake. Powdered sugar-covered Polish cookies, and some amaaaaazing Polish candy--- liqueur-filled chocolates! Incredibly good. Oh, and let's not forget my mother-in-law's wonderful homemade kielbasa. She made twenty-some pounds of it for the wedding reception. Oh, didn't I mention that? Yep, that's the primary reason we went to Maryland. For our beautiful niece's wedding. Grrrreat wedding, too. I'll tell you more about it next time. (Ever been to a Polish wedding?)

In the meantime, how about you? How do you indulge your tastebuds when you're away from home? Oh, and in case you're worried about all that food I ate totally ruining my (ahem) girlish figure, don't. Everybody know vacation calories ... don't count.

On Coming and Going Home

Thought for the day: I take my children everywhere, but they always find their way back home. [Robert Olen] 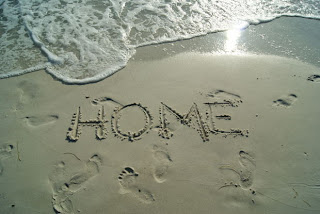 Well, if ya really want to be technical about it. I've actually been home for a few weeks, but I was double-doggone determined to finish editing my poor neglected novel before dipping my tootsies back into the blogosphere again. Well, (ta-DA!) I did it! And the manuscript is already (Already??? Who am I kidding? FINALLY!) in the hot little hands of  a small publishing company's editorial team. ( I don't expect to hear anything from them for several months.)

T.S. Eliot said, Home is where one starts from. If that's true, does that make Baltimore my home? I mean, that's where my hubby and I both started. When we drove up there for a visit last month, were we actually... going home? Or were we coming home when we left there and came back to Georgia? As Yul Brenner said, It is a puzzlement! 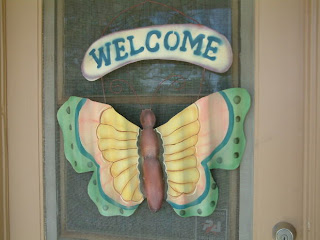 According to Robert Frost, Home is the place where, when you have to go there, they have to take you in.  And Maya Angelo called home ...  the safe place where we can go as we are and not be questioned.


Ahhhh, HOME. A place where we're always welcome. A safe place, where we belong, and where we're missed when we leave. Sounds all warm and fuzzy, doesn't it? Yes sir, tugs at the ol' heartstrings.

But, wait a sec! Thomas Wolfe claimed, You can't go home to your family, back to your childhood... 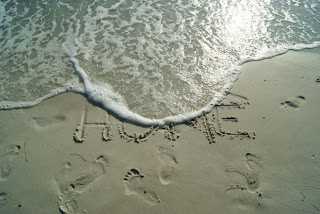 Is it possible that the warm fuzzy images... of our old hometowns, of our childhoods... are nothing more than (gasp!) drawings in the sand? And those old realities as we remember them have long since been washed away by the waves of time? 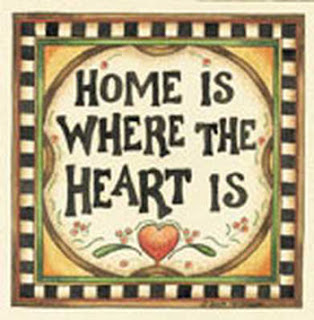 And yet...  and yet... how wonderful to spend time with family and friends who still live in our old hometown, who share a common history with us, who also remember, and ache for, some of the same ghosts and memories of the past as we do. Who remember us when we were young and foolish, who can laugh with us over shared memories. So, YES! Home is where the heart is, and no matter what ... a part of our hearts will forever linger in our old hometowns, in our childhoods, in our past. Nostalgia is what tugs at our heartstrings, and what calls us back home.

Think this guy's gonna make it back home?

So, what do you think defines a home? We all know a house doesn't make a home. (Dionne Warwick told us that years ago.) Is it ... wherever you hang your hat? A state of mind? Are you like a tortoise, carrying your concept of home around with you, and so comfortable inside your own skin that no matter where you are, you're... at home? What do you love most about your home? Is it the people (and critters) you share it with? The things?  Memories? Can you go back home again?

Okay, enough. It's great to be back, babbling about house and home. But ya know what? As Danielle Raine wrote, The cruel irony of housework: people only notice when you don't do it. So, doggone it, I'd better DO it, before somebody (not mentioning any names) starts noticing ... 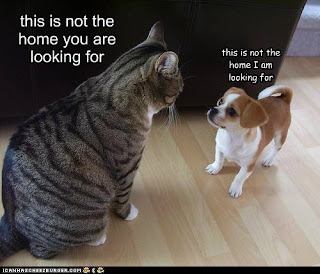