Thought for the day:  Racism isn't born, folks, it's taught. I have a two-year-old son. You know what he hates? Naps! End of list. [Denis Leary]

The Atlanta Journal ran a photograph last month, a photograph that was taken more than twenty years ago, but has been recently drawing renewed attention. A photograph I want YOU to see.

Before showing it to you, a little background information. The photographer, Todd Robertson, graduated from the University of Georgia School of Journalism in 1991, and in September of the following year, attended a Ku Klux Klan rally as a freelance photographer, in hopes of capturing some pictures for the Gainesville Times, a small local newspaper. Sixty-six KKK members showed up in Gainesville for that rally, and they were all outsiders. No locals. And there were approximately three times as many law enforcement officers on hand to keep the peace. Some notable civil rights leaders were also there, and the whole rally and peaceful counter-protest march even got some coverage on the Oprah Winfrey Show.

I think that hate is a feeling that can only exist where there is no understanding.  [Tennessee Williams]


Then, you're ready to SEE the picture. 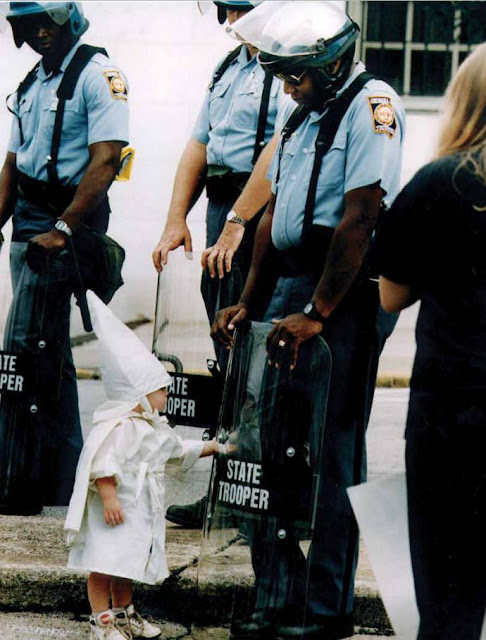 The now-retired trooper, Allen Campbell, says he wasn't even thinking about race relations that day. To him, it was just another day on the job, and he was thinking more about the Labor Day cook-out he was missing. Then, this little fella approached to marvel at his reflection in the riot shield, and the photographer happened to be right there to capture the moment. To capture the expression on Campbell's face. And a moment is all he got... because the mother, seen at the right of the picture, quickly snatched the boy and brought him back to the stroller, where an even younger child sat, also dressed in mini-KKK garb.

Josh, the little boy in the picture, was only three years old at the time. Most people who see this picture want to know what became of him. But Campbell and Robertson, who abandoned photography shortly after taking this picture, don't know.

In light of this photograph's recent resurrection, the Gainesville Times recently interviewed Campbell and Robertson. You can see that short video here

Anybody remember the poem Children Learn What They Live [by Dorothy Law Nolte, 1972]


So, what happens when a child is taught to hate?

I will permit no man to narrow and degrade my soul by making me hate him.  [Booker T. Washington]

Lord, make me an instrument of thy peace. Where there is hatred, let me sow love.  [St. Francis of Assisi]

Do you remember this song? It isn't a perfect match for this post, but it's insinuated itself into my mind, and insists that it's ... close enough.


So, what do YOU think of that old photograph? What do you see in it? In the expression on the trooper's face?

We must accept finite disappointment, but we must never lose infinite hope.  [Martin Luther King, Jr.]
Posted by Susan Flett Swiderski at 12:34 AM