When Cats Meow, I Jump

Thought for the day: Dogs have owners; cats have staff. 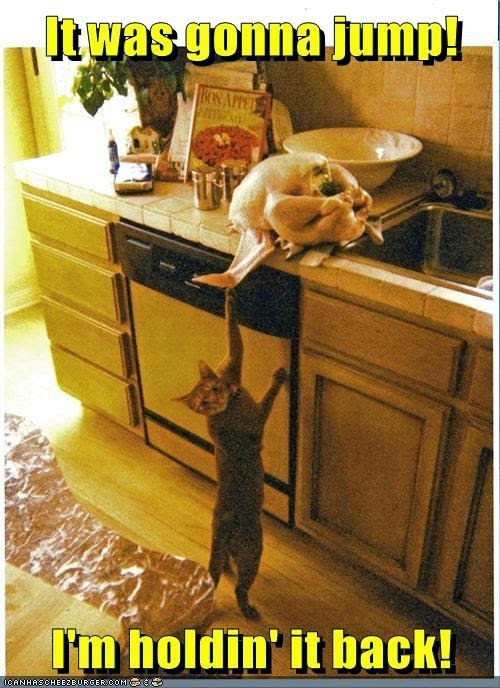 At one time, Smarticus didn't think he liked cats. But that was before we had cats. Now he spoils them every bit as much as I do.

Which, of course, is exactly what every cat deserves. Just ask 'em. They'll tell you. They were once worshiped as gods, and as far as they're concerned, they should still be worshiped as gods. Makes sense, right? This explains their uncanny ability to maintain such a haughty regal air about them, even when they're caught doing something stupid or clumsy.

Anyhow, much to my surprise, it looks like we have three cats now. Yeah, three. 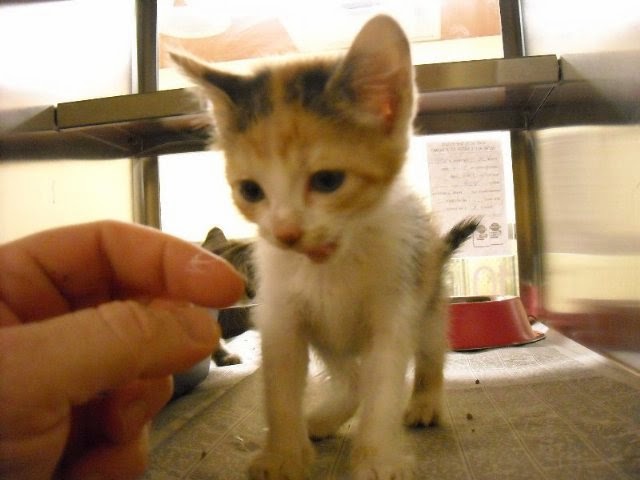 Remember Dash?  This is what she looked like when we adopted her from the shelter almost five years ago. 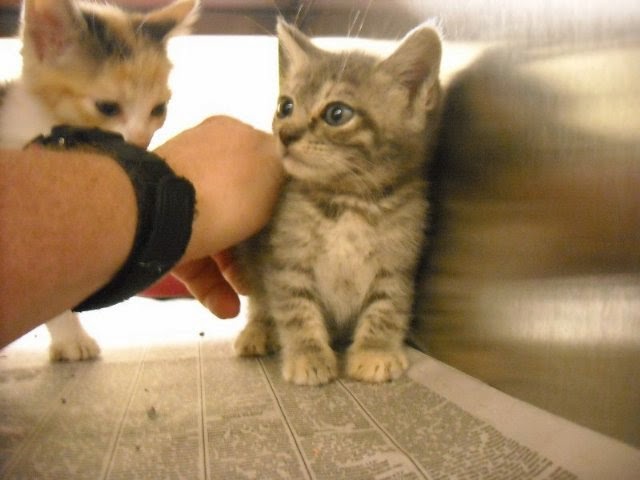 And this is what Dot looked like. We figured two cats would be juuuuuust right. That way, they could entertain each other. Besides, we had no choice. They picked us. (Anyone who has ever adopted an animal understands exactly what that means.) 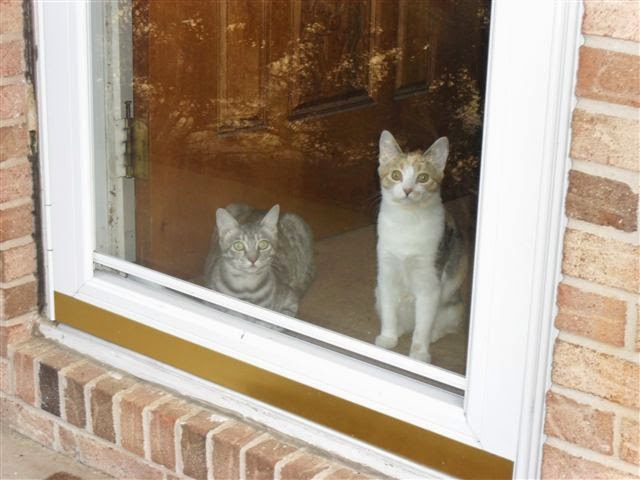 This is closer to what they look like now. Most of the time, they get along well, except for occasional bouts of sibling rivalry... 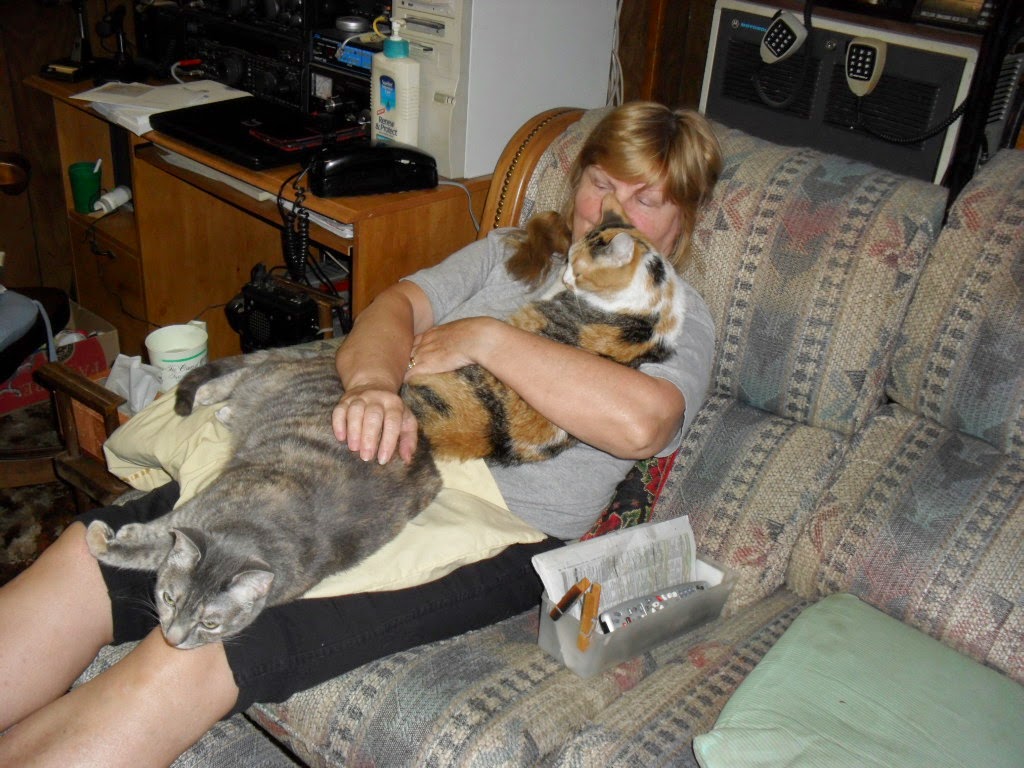 ... like over who gets to sit on my lap. I was reading the newspaper... Oh well, what can I say? Their royal highnesses decided it was nap time.

If you'd like to see an earlier post about our girls, including some fun little-known secrets about cats, go here.

Cats work out mathematically the exact place to sit that will cause the most inconvenience. [Pam Brown] 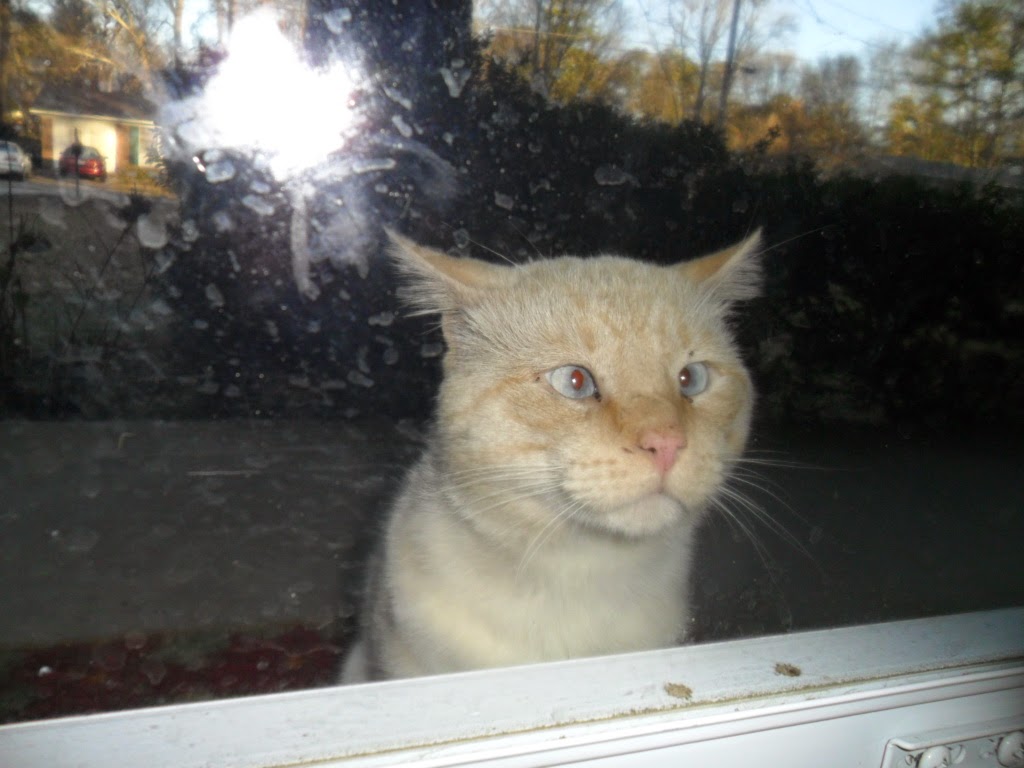 Anybody remember Cowboy? I wrote about him a while back. Lots of you urged me to adopt him. He was forever hanging around our house, looking in the windows and waiting on our front porch to greet me every morning, so we thought he was a stray. I mean, he was the epitome of the poor outsider looking in. So you might think HE would be our new resident feline. But nope. It turns out, he has a home. He still spends a fair amount of time in our yard looking for some cuddles and some food, (not necessarily in that order) but since his owner got him fixed, he doesn't spend nearly as much time mooning at us through the windows. (Hmmm, methinks it may be possible he was mooning at our girls.) 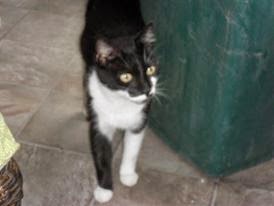 This is the new Swiderski feline. We named her Daisy. Her previous owners moved away, and left her behind to fend for herself. Before they dumped her, we saw her in our yard a few times, often being chased away by Cowboy. But she was extremely skittish, and not very friendly.

Then we noticed she was getting thinner and thinner, so natch, we started providing her with food, too. Her own bowls on the front porch... away from where Cowboy had his bowls out back. (His and every stray cat from miles around, that is. I swear, there must be some sort of underground communication that enables critters to let other critters know where the restaurants are. A very very large raccoon especially seems to enjoy the cuisine...)

Anyhow, the more we fed her, the friendlier she became. The more loving she became. The closer she came to making us fall on our arses because she kept doing figure eights around our feet whenever we walked outside. And the more she tried to follow us into the house.

Uh-oh. It was pretty clear. She'd picked us.

So we had no choice. We took her to the vet. Got her tested, de-wormed, and up-to-date with her shots. She's spayed, clear of fleas, and has a clean bill of health. Okeydoke. Time to bring her inside.

Dash and Daisy don't get along very well. What an understatement! They chased each other around the house like a couple crazed bats outta hell. (sigh) Talk about noisy fireworks!

Oh well. Our fault. We should have taken more time to introduce Daisy into the herd. Especially to our princess Dash.

Now, the new little kitty is in our Florida room, where our other girls can see her... but can't get at her. Dash and Daisy still try to attack each other through the glass from time to time, but I think they're becoming a little more used to each other. I'm hopeful they'll eventually learn to live together, and soon. Otherwise, we're gonna have to find Daisy a new home.

[Would anyone like to adopt a cat? Daisy's about eighteen months old, less than ten pounds, and extremely sweet and loving. Isn't picky about what she eats, either. She gobbles up whatever kind of cat food, wet or dry, that we give her. I guess being abandoned on the street has a way of instilling appreciation, huh? Seriously, if any of you local folks are interested, just send me an email or give us a call. We'll even throw in a big bag of food! Pssst... hey, Kyle...!] 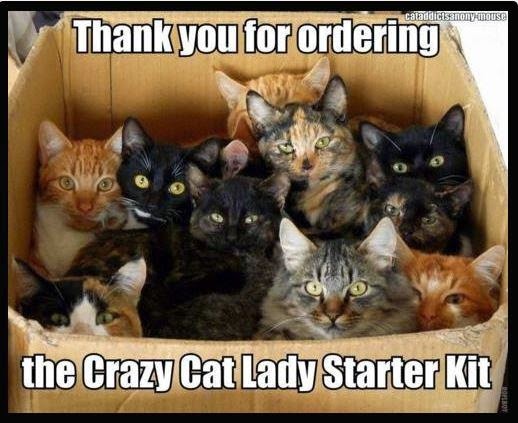 And so it goes. At least for now, we have three cats.

And I swear, we're stopping at three.

I had been told that the training procedure with cats was difficult. It's not. Mine had me trained in two days.  [Bill Dana]

Oh yeah, it's been a while since I posted anything new about the things our pets have taught me. Well, I've learned something else new from our cats, especially Dot. She loves to knead my belly. Vigorously. So what have I learned? It's her fault. I'm not really gaining weight. Thanks to her administrations, my belly is simply... rising.

As you read this, I'm not anywhere near my computer. (Dontcha love the pre-scheduling feature on Blogger?) I'm actually doing something really really cool. I'll tell ya about it next Friday, but in the meantime, I won't be online to respond to your comments for a while. But I will get back to you. Assuming our four-legged furry kids let me up, that is...

Email ThisBlogThis!Share to TwitterShare to FacebookShare to Pinterest
Labels: animals, appreciation, belonging, our cats, things my pets taught me