Thought for the day:  If love had a scent, I don't think it would smell like chocolate and roses. I think it'd smell more like baby powder and pot roast. 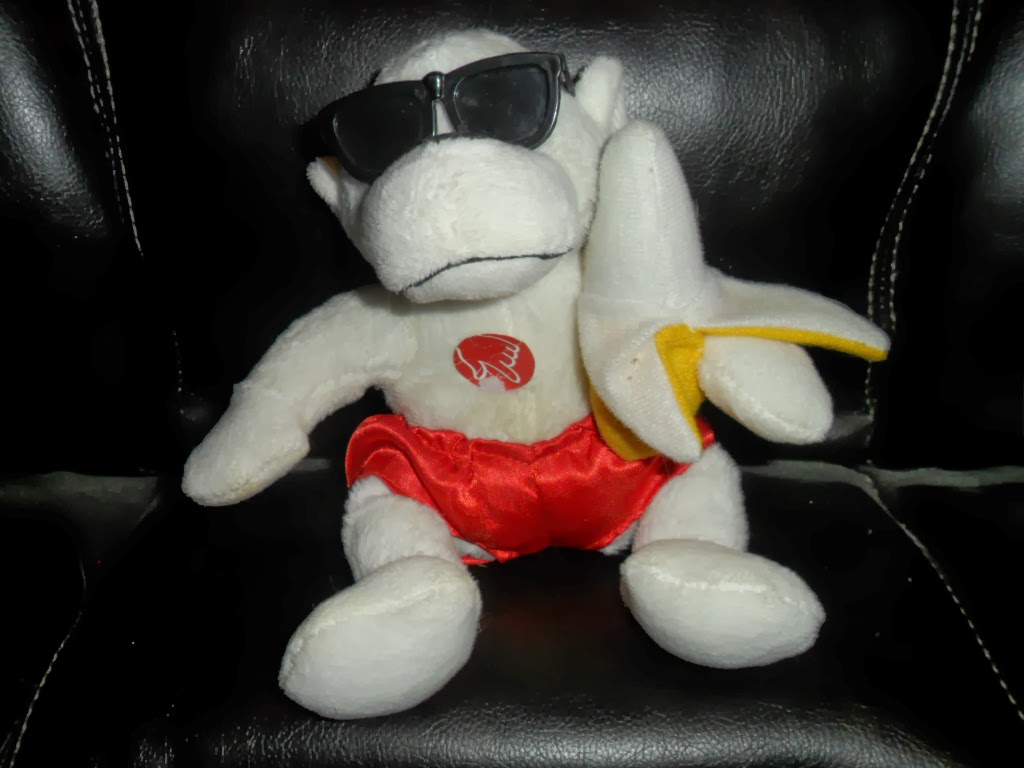 Okay, guys, consider this your own personal public service announcement: tomorrow is Valentine's Day. There. You've been warned. As if the advertisers would let you forget, huh? They've been bombarding us with reminders for more than a month. I dunno. Seems to me that's an awful lot of pressure to put on one little ol' day, don't you?

Anyhow, so how do you like my love monkey? I'm not talking about Smarticus; I'm talking about that cute little stuffed monkey in the picture, which he gave me for Valentine's Day a few years ago. If you squeeze his belly, he gives a wolf whistle, and says in a dirty ol' man kinda voice, I go bananas over you!  Again, I'm talking about the monkey, not Smarticus, although come to think of it, it's just the sort of thing he would say. That's why it's such a perfect gift. Forget about jewelry and furs, and all that jazz. A gift that makes me laugh wins me over every time.

Then again, chocolate ain't bad, either. After all, a box of candy is never the wrong size, right? Although it came close to being too large one year. Smarticus bought me a box of chocolates big enough to cover the entire top of the coffee table. I kid you not. Whew! Talk about a LOT of candy! It took me almost a whole hour to eat it all. (Just kidding. It took more like seventy minutes.)

I'll never forget some of the romantic cards and gifts Smarticus has given me over the years. (sigh) We were all of twelve or thirteen the first time he wrote a poem (just for me!) in my autograph book. It went like this: Roses are red; violets are blue. You've got a shape like a B-52. I mean, doesn't that send shivers of sheer delight up and down your spine?

We weren't much older than that when he extended a lovely decorated box toward me, smiled seductively, and told me to open it. When I did, I found a barf-worthy severed finger lying atop a fluffy bed of cotton. It was his finger, of course, stuck through a hole in the box bottom and doctored up to look as disgusting as he could make it. Yeah, I know. Smarticus was a bit of a farticus in those days.


Talking about original, have you ever wondered who this St. Valentine fella was and how he came to be associated with a feast day devoted to love? Or why we associate the day with the color red... with red roses in particular... and why we exchange Valentines?

Well, then, you've come to the right place.

Our man Valentine was a priest in Rome during the reign of Claudius the Cruel, an emperor with an unholy affinity for declaring war. In fact, this dude's wars were so frequent and so unpopular, it got to where very few men were joining the military. The emperor, who was evidently just as stupid as he was cruel, decided the only reason men weren't rushing to fight his wonderful wars was because they were too darned attached to their wives and family. So he came up with a solution. He banned marriages.

Oh, but fear not. Our hero priest continued to perform marriage ceremonies in secret. That is, until the mean ol' emperor found out about it, and had him killed. By beating, stoning, and then beheading. (Talk about overkill.) Valentine died on February 14, 270. (Ah, HA!)

Legend has it that he left a special note for the jailer's daughter, and signed it... from your Valentine.

So, why the color red, you ask? For obvious reasons, blood red is the color of martyrs. And thanks to the martyred St. Valentine... it also became the color of love. Red roses represent Venus, the goddess of love. And if legend is correct, Valentine himself sent the first Valentine card. St. Valentine's feast day was established in 496, but it didn't become recognized as a lovers' holiday and big day of romance until ten centuries later, when popular belief held that the fourteenth of February marked the start of mating season for birds.

So, if you consider Valentine's Day to be for the birds... you aren't entirely wrong.

At right is an example of a 1909 Valentine's Day card, which I found on Wikipedia. As a young girl, I remember buying big fancy cards for my mother... complete with scented stuffed satin hearts and lace around the edges... for the exorbitant price of thirty-five cents. My sweet Smarticus has sent me a bunch of beautiful cards over the years, but he'd still probably be more comfortable with one that said: Roses are red; violets are blue. Sugar is sweet, and so are you... The roses are wilting; the violets are dead. The sugar bowl's empty, and so is your head.

Just kidding. He's actually quite the romantic. (But I sure am glad he didn't know about St. Valentine losing his head over love when we were kids. The finger was bad enough.)


Love is the thing that enables a woman to sing while she mops up the floor after her husband has walked across it in muddy boots.

If love is blind, why is lingerie so popular?

You can't blame gravity for falling in love.  [Albert Einstein]

Oh, yeah. I wanted to tell you guys about one of the best aphrodisiacs of all time. Wanta put your lady love in the mood? Do the dinner dishes. I tell ya, nothing is as sexy to a woman as seeing her man tackling a load of dishes  while she's in the easy chair with her feet propped up... eating strawberries dipped in chocolate. Or if ya reeeeeally want to make her weak in the knees... clean the toilet bowl.

Anyhow, whether you ignore the day, celebrate it in a small way, or go reeeally BIG... Happy Valentine's Day, y'all.

P.S. Looking for another kinda love... like the love of a reeeeeally good book? I recently had the honor of reading the ARC (Advanced Reader Copy) of Linda Grimes' third book The Big Fix. Love, love, LOVED it! It won't be released until May, (sorry!) but if you haven't read the first two books in this awesome series yet, (In a Fix and Quick Fix) now's your chance. These books are fun, adventurous, laugh-out-loud sexy romps, and unlike anything you've ever read before. Trust me... they are pure unadulterated FUN. Linda has out-Evanoviched Evanovich. Check 'em out. You may even be able to find them in your local library.

Never go to bed mad--- stay up and fight.  [Phyllis Diller]
Posted by Susan Flett Swiderski at 12:34 AM