So whattaya think? Are we... alone... in this universe, or are there other lifeforms out there somewhere... lifeforms who may have even paid our planet a visit upon occasion? It seems mathematically improbable that we humans are the only intelligent lifeforms in this endless universe. And yes, I do use the term intelligent rather loosely. I suspect that if we ever do make contact with other beings from outta this world, we're gonna get our comeuppance, and find out just how unintelligent we are. 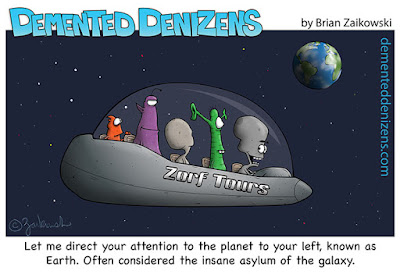 Nonetheless, let's have a little fun by taking a look at some of the space alien hoaxes perpetrated over the years by some of our fellow earthlings, shall we?

As far back as April Fool's Day, 1897, pranksters have been trying to dupe the public into thinking they saw a gen-u-ine UFO. On that day in Omaha, Nebraska, a couple guys launched a helium balloon with a burning wicker basket beneath, and allegedly spooked quite a few people.

[Okay, ya got me. I'm sure it didn't look anything at all like the balloon in the picture.] ☺

A couple weeks later, three boys in Dallas, Texas, soaked a cotton ball in kerosene and tied it to the leg of a turkey vulture. Alas, the pranksters got caught when the bird landed on their school's roof, and started a fire. Poor bird probably cooked his own goose. So to speak.

In 1947, residents of Twin Falls, Idaho reported multiple sightings of a flying saucer. Then one agitated lady called the authorities, because she spotted the saucer embedded in her neighbor's yard, along with a long strip gouged in the dirt... obviously showing where the compact UFO (better gas mileage!) came in for a landing...

Turned out to be the handiwork of four creative teenagers, who built their saucer with scraps: radio tubes, wires, an old phonograph, and discarded electrical parts. The boys said they were just having fun. Not their fault the town got so gosh-darned excited. Sheesh. 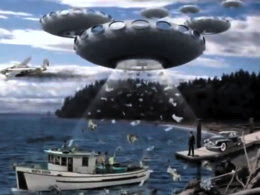 Also in 1947, in what was dubbed the Maury Island Incident, Harold Dahl claimed six flying doughnut-shaped discs flew over him when he was boating in the Puget Sound. He said one of those dastardly discs dared to spew molten metal, which killed his dog, and burned his son. Air Force investigators later ID'd the metal as scrap from a local factory, and Dahl admitted to the hoax. Said it was just a joke that got out of control. Let's hope he didn't kill his dog and burn his son to support his joke.

Then there's THE big event of 1947. You know, the alleged spaceship landing in Roswell, New Mexico, near the area now known as Area 51. Everyone agrees that there's some hush-hush deeply secretive stuff going on there at those Air Force grounds, but did a spaceship crash there in Nevada in 1947? Were live aliens captured? Was one autopsied? Ooooh, could they still be there today? According to some ufologists, three months after the alleged crash in Roswell, President Truman formed a highly secret group called MJ-12, (short for Majestic-12) whose soul purpose was to investigate and recover alien spacecraft. Some also attribute this 1950 quote to him: I can assure you that flying saucers, given that they exist, are not constructed by any power on earth. Did he actually form that group, and say those words? Beats me. But quite a few other presidents, world leaders, and military figures have spoken up on the side of flying saucers. Jimmy Carter even claims to have seen one. 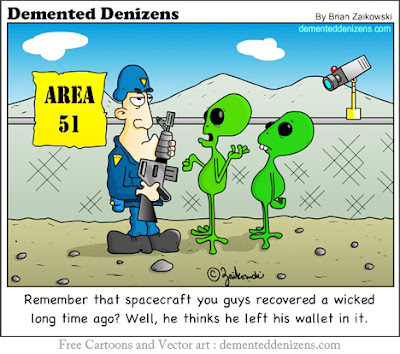 Okay, I'm gonna stop right here, and finish up with this topic next week. In the meantime, did you have a favorite space toy or show about space travel when you were a kid? Anybody remember the 1954-55 TV show Flash Gordon? Let's just say special effects weren't all that outta this world in those days, because if I remember right, in some shots, you could actually see the string holding the rocket in the air. (And I'm not sure, but the sound of the flames coming out its rear might very well have been provided by some guy saying, "Shhhhhhhhhhhh.")  Even so, we watched it. And were amazed. And then there was the mighty Rocket Man, who worked hard to save the world in the '50s and early '60s. In this clip, you might hear a familiar voice. Would you believe... Leonard Nimoy?

Oh well, since we mentioned Leonard Nimoy, we've gotta give a nod to William Shatner, too, right? This clip is muuuuuch more recent; it's from 1978. He's kinda sorta singing. What else? Rocket Man, of course.


I was gonna stop there, but I decided to leave you with something... classy. Yeah, that's the ticket. I never saw the movie Rocket Man, but after seeing this clip, I wish I had. Looks like a real hoot. Or should I say... a blast?

I'm not gonna be outta this world, but I am gonna be outta my office until sometime next week, so I won't be responding to your comments right away. But as Schwartzeneggar said, I'll be Bach.