Showing Love to a Stranger

Thought for the day:  I think it's incumbent on anybody born on the thirteenth to consider that number... lucky. 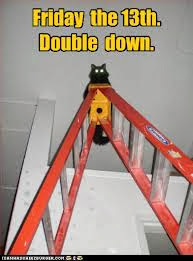 Friggatriskaidikaphobia is a freaky cool word that means fear of Friday the 13th. Since Friday is considered by some to be an unlucky day, and thirteen is feared by some as an unlucky number, it should come as no surprise that when the two converge, superstitious fears multiply accordingly. We could say that

Me? I'm not superstitious. Matter of fact, I think of thirteen as a lucky number. It's the day I was born, and I always think it's extra cool when my birthday falls on a Friday... like today. Yep, today is my birthday. (whoopee)  I'd like to send all kinds of good wishes to someone else who's celebrating a birthday today. Please join me in wishing  Jon a very happy birthday... and many more. [Happy birthday, cowboy!] If you've never visited his blog before, go check it out. And if you enjoy poetry, check out his books, too. Well... no, don't just check 'em out... buy 'em! His Love Letters to Ghosts is an unforgettable collection of haunting poems that resonate like an anguished cry in a darkened room. Trust me, you'll treasure them and  read them more than once. I sure have. And his collection of poems for children is absolutely delightful. I gave a copy to one of my granddaughters last year, and she loves it. Birthday wishes also go out to Geo, another one of my favorite blogger dudes, and to cat, sweet lady and poetess extraordinaire. Not sure exactly which day their birthdays fall on, but it's right about now, give or take... Guess that makes us all Sags. Some of us more than others... :) (I prefer to think of it as a loose fit...)

So anyhow, if you folks in the southeastern part of the United States happen to see a massive glow in the sky today, fear not. It's not Armageddon, or anything. It'll just be the blaze atop my birthday cake. (You know you're getting old when the candles cost more than the cake!) I have a feeling our local firemen are sick and tired of coming to our house every year to extinguish the bonfire... which wouldn't be necessary if Smarticus didn't light the darned candles with a blowtorch... so maybe it's time for us to think about skipping the candles from now on. The truth is, I'm creeping ever closer to that age where there'll once again be a single candle on my cake, and everybody will tell me what a good girl I am if  I can summon enough hot air to blow it out in a single try.

Know what? Maybe it'd be better to skip the cake too, and just have a glass of wine.


Youth is the gift of nature, but age is a work of art.  [Stanislaw Jerry Lec]
(Too bad my work of art is being painted by Picasso...)

I'm happy to report that my inner child is still ageless.  [Jane Broughton]
You can't help getting older, but you don't have to get old.  [George Burns]

I am old enough to see how little I have done in so much time, and how much I have to do in so little. [Sheila Kaye Smith]


Attitude, a sense of hope and humor, along with the feeling that one is not alone, is vital to a person's well-being, especially when fighting a deadly disease like cancer. Over the past few months, I couldn't help but notice some patients were at the cancer centers... alone... with no family member or friend along to share the burden.

Sure, we spoke to each another. Matter of fact, it's astounding how much and how quickly camaraderie develops within the confines of a cancer center. It's as though everyone's a member of the same club that no one wanted to join.

Still, it troubled me to see people there alone.

I told Smarticus that once we get him healthy, I'd like to volunteer at one of the centers. Maybe some of those loners would enjoy having someone with them during their lengthy chemo infusion...? Someone to chat with or play games with...? (Smarticus and I played a LOT of Yahtzee.)

He said maybe those people WANTED to be there alone. That thought had never crossed my mind, but it gave me something to chew on.

Still, it bothered me to see people there alone with no visible sign of support. Surely I could do... something.

Then serendipity struck. An article in the newspaper alerted me to a non-profit group that sends handwritten letters to breast cancer patients. The opening paragraph of this article, written by Erika Mailman, stated: A single card, written by a stranger, became a touchstone for a woman who had been diagnosed with breast cancer. She read it every night before bed. She brought it to every appointment.

Ah HA! thought I. Such a simple... yet profound... way to offer encouragement and show support.

Girls Love Mail was started by writer and breast cancer survivor Gina Mulligan, and to date, this group has collected and forwarded 145,000 handwritten letters and cards to cancer centers all over the U.S. The article went on to express how much these letters mean to the women who've received them. In a world of sometimes social disconnection, these letters buck the trend... and they make a difference in these women's lives.

Making one person smile can change the world. Maybe not the whole world, but their world.

Although these letters and cards currently go to breast cancer patients, maybe if the organization receives a large enough volume of them, they could be sent to other patients, as well. I dunno... but maybe. And although this organization serves patients in the U.S., maybe there are similar non-profit groups in other countries, as well...

Try to be a rainbow in someone's cloud. [Maya Anglou]

Not all of us can do great things, but we can do small things with great love. [Mother Teresa]