Thought for the day:  Be at war with your vices, at peace with your neighbors, and let every new year find you a better man. [Benjamin Franklin]

That ol' Ben Franklin was a smart dude. No doubt, we should all wrestle our vices into submission, and being friends with our neighbors is undoubtedly a good idea, but somehow, I don't think most men would appreciate their ladies looking for a better man each year... ☺

But neighbors... some neighbors make it really hard to get along, don't they? The loud inconsiderate ones who party into the wee hours of the morning, (Without inviting YOU!) the ones who blithely allow (Nay... encourage!) their dogs to evacuate on your lawn every day, the ones who borrow, borrow, borrow and never ever return. You know the kind. Robert Frost told us Good fences make good neighbors, but some people are so belligerent and difficult to get along with, they find a way to try our patience, fence or no fence.

And then... consider some of our world-wide neighbors. In far too many cases, inane disputes between countries have led to wars. And then... there's Canada.

Canadians are extraordinarily tolerant and polite. I can't imagine our neighbors to the north going to war for a frivolous reason. I mean... just look at how they protest: 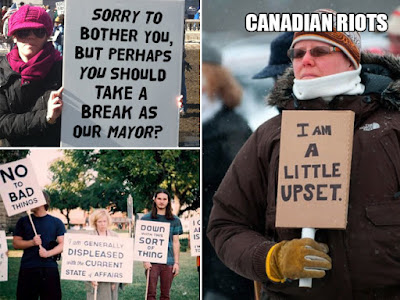 Q. How do you get a Canadian to apologize?
A. Step on his foot.

Q. How many Canadians does it take to change a light bulb?
A. None. They don't change light bulbs; they accept them just the way they are

So would it surprise you to know that Canada and Denmark have been at odds for decades?

What's their bone of contention, you ask?

Yeah, a rock... a BIG rock, but pretty much a rock, nonetheless.

Its name is Hans Island, and it's an uninhabited rock about half a mile in diameter and completely devoid of vegetation. It lies in the middle of Nares Strait, which separates some Canadian islands from Greenland, which, of course, belongs to Denmark.

The problem is, that strait is approximately twenty miles wide at its widest, and according to international law, any country can claim any territories within twelve miles of their shores. So... both Canada and Denmark claim this frigid hunk of Arctic rock as their own.

In 1973, the two countries signed a treaty to create a boundary between their territories, but the folks who drew the imaginary line down the middle of the strait kinda chickened out when they encountered the rock right in the center. They hopped over it without assigning ownership to either country.

So... both countries claim it. How do these two countries fight their battle over this rocky island?

With great spirits and a touch of humor.

From time to time, the navies from each of these countries pay a visit to this barren chunk of rock.

When the Danes visit, they hoist their flag and erect a sign saying, Welcome to this Danish island.

And... they bury a fine bottle of Danish schnapps.


And when the Canadians visit, they remove the Danish flag and hoist a Canadian one. They also exchange the sign for one that reads, Welcome to Canada... and they dig up the schnapps and replace it with a nice bottle of Canadian Club whiskey.

It's rather nice to hear about a dispute being handled with firewater instead of firepower, isn't it? These guys exchange shots... but it's the kind that warm a man's heart on a frigid Arctic day.

There's an old Danish proverb that says, No one is rich enough to do without a neighbor. I'd say these two countries take this to heart. These fellow NATO members continue to be good neighbors, in spite of a silly little dispute over a rock. Somehow, if oil should suddenly be found at this location, I have a feeling these countries will work that out amicably, too. After all, that's what friends do.