Thought for the day:  Time is but a stream I go a-fishing in. I drink at it, but while I drink, I see the sandy bottom and detect how shallow it is. Its thin current slips away, but eternity remains. [Henry David Thoreau] 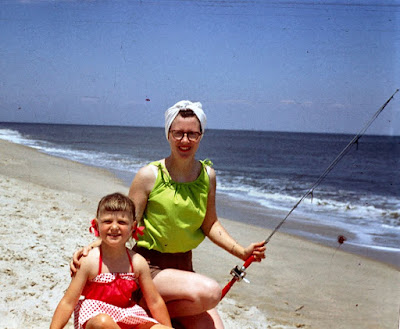 How is it possible that I can look at this old photo of my mother and me from so many years ago and still remember so vividly exactly how icky it felt when the lining of that bathing suit got filled with sand?

So long ago, yet so vivid. Such is time. As Thoreau said, eternity remains.

Anyhow, I won't be around to respond to your comments or visit your blogs and all that good stuff... but I WILL be back next Friday with a brand new post. In the meantime, I'm leaving you with an updated version of an oldie but goodie, which first appeared in 2011.. before any of you were following me... as Sum Tink Wong. So in a way... it's new!

Thought for the day:  Man who stand on toilet high on pot. 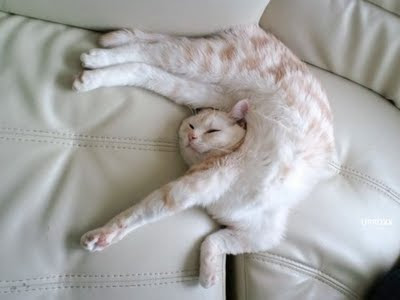 Have you ever noticed how twisted up translations can become from one language to another? Sometimes, they're pretty frustrating, but they can also be inadvertently funny. Manuals for electronic gadgets can make you want to pull your hair out when the manufacturer's primary language is Japanese. And my hubby bought a box of drill bits, (made in China) only to come home and notice the box declared them to be "dill bits." We thought that was so funny, we kept the box around for a while just to show our friends.


BUT ... wouldn't you think if someone wanted to open a restaurant, a place for American people to come and EAT,  they'd check, check and DOUBLE-check how the name they've selected for that restaurant might translate before hanging their sign out front? I sincerely doubt if any of the following owners gave it a second thought: 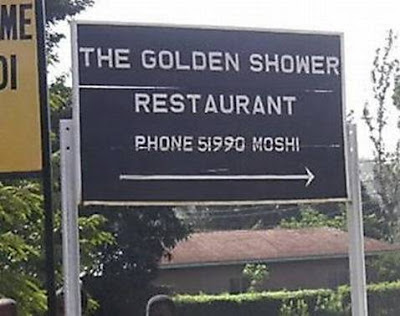 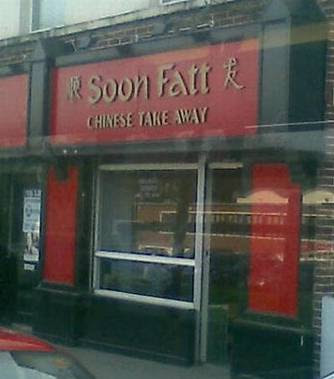 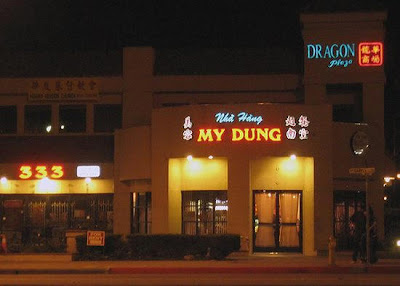 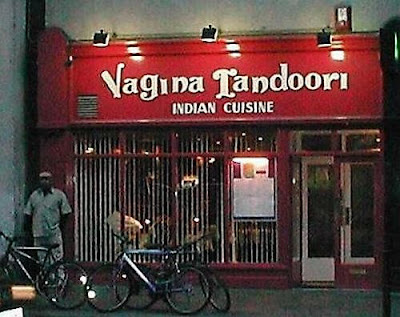 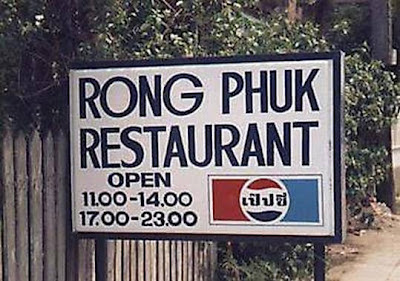 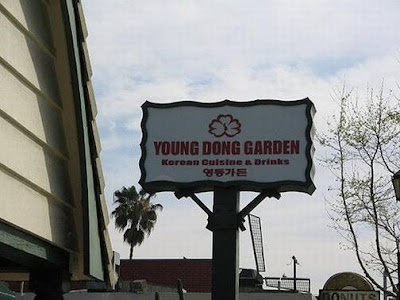 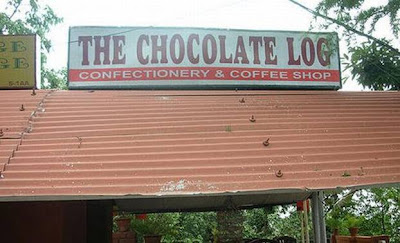 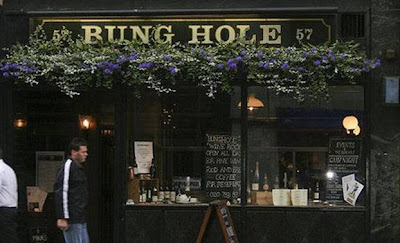 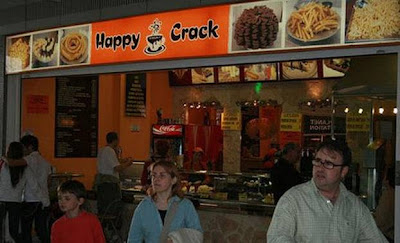 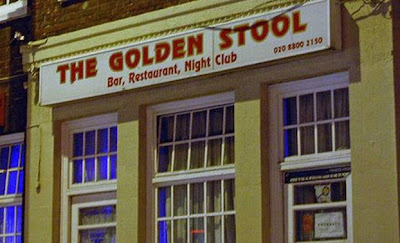 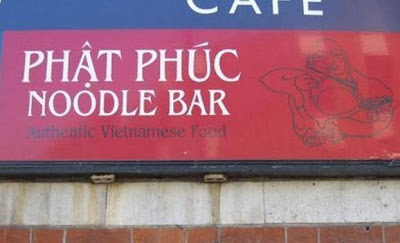 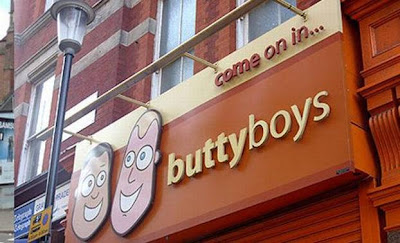 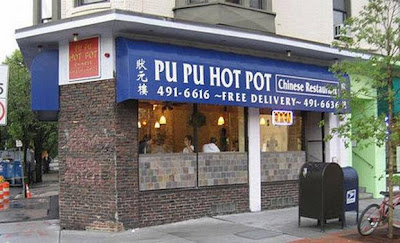 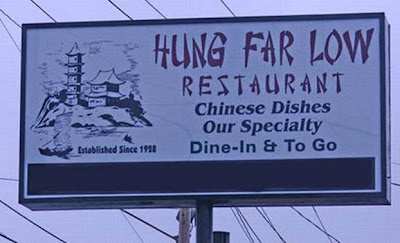 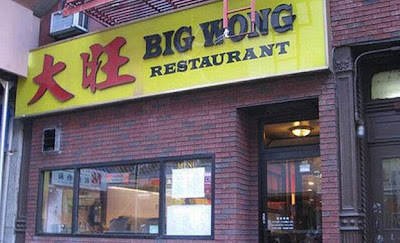 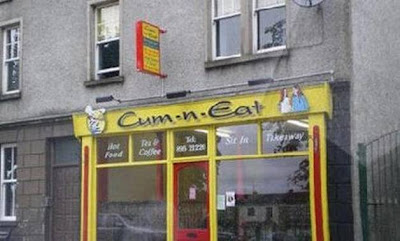 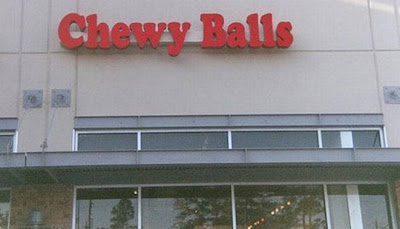 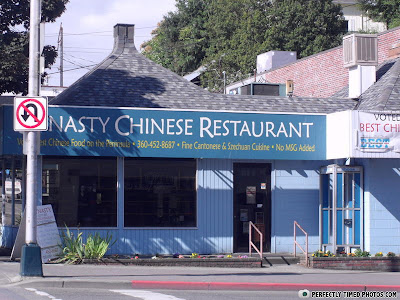 What? You say, for some strange reason, you've decided to eat at HOME tonight?

And you have the oddest craving for Chinese food? How about this simple recipe for fried rice: 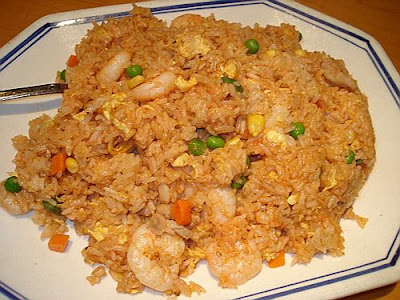 Surely you have some leftover cold rice in your fridge, right? No? Well, then you'll have to cook some, and stick it in the fridge to let it chill for a while. While it's cooling, you can chop some green onions, and gather whatever veggies and/or meat you want to add to your creation. For four cups of rice, you'll want about a cup of veggie/meat combo. Or more, if you'd like. (It's YOUR dinner.) Shrimp is good, leftover pork, beef, peas, carrots, whatever you happen to have on hand. OK, now beat two eggs and stir fry in 2 T oil (peanut, lard, sesame, or whatever your little heart desires) until the eggs are dry and separated into small pieces. Remove the eggs, put 3 more T oil into the pan, and toss in your veggies, meat and rice. Stir fry for ~5 minutes or so. Add 2 T chicken broth, 3 T soy sauce. Mix well, and then stir in your eggs, 1/2 t pepper and 2 t sesame oil. Voila! Your masterpiece!

Don't feel like rice? How about this? If you're feeling a little, um,  creative, these chicken wings are guaranteed to put a smile on your face: 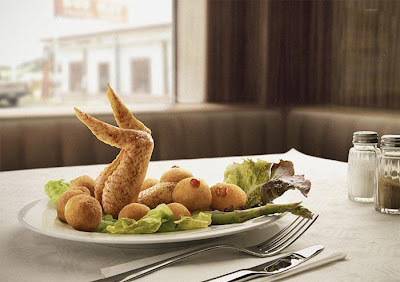 I think some cross-language double entendres may be intentional. Like a while back, my hubby and I attended a function to honor Vietnam war vets. When Smarticus left the table to get some more food from the buffet, a young Vietnamese man came over to me to introduce himself. For all I know, he was born here in America, because he definitely spoke and acted like any other homegrown American fella his age. At any rate, he was very Americanized, if you know what I mean. Anyway, he looked me right in the eyes, grinned, and said... "I'm hung." Now I'm sure his name's probably spelled Huang or some such, but that's how it sounded. And he didn't say his NAME was hung; he said HE was. I kinda wondered if he wanted me to... congratulate him...? Personally, I think I deserve an Academy award for not laughing hysterically or making some inappropriate, but totally knee-slapping, response to his rather provocative declaration, but I didn't know the guy and didn't want to offend him. In retrospect, considering the way his buddies were laughing and raiding their beer bottles on high, I'm pretty sure either reaction would've been perfectly acceptable. In any language.