Thought for the day: All good things must come to an end. (sigh) 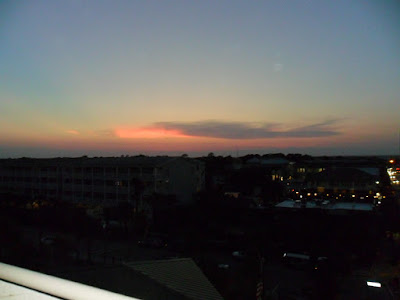 No matter how beautiful a day may be, the sun has to eventually set, and no matter how much fun an experience may be, it, too, must end.

So I promise this'll be the last post about our 50th anniversary trip to Charleston. Then I'll find something new to bore you with.

This last post will be about two plantations in the Charleston area. Boone Hall, located in Mt. Pleasant, has been dubbed the #1 plantation by USA Today, and called a must-see destination by many, so that was our first plantation stop. But that wasn't the only reason. I'd seen pictures of the entry to that plantation... and there's a good chance you have, too, because it's a rather iconic shot. If you saw the movie North and South, you might remember the scene with Patrick Swayze riding on horseback down that entryway road. The plantation was also featured in numerous other flicks, like The Notebook. So me being me, even though we'd already visited the mighty Angel Oak, I wanted to see this impressive line-up of live oaks in person. 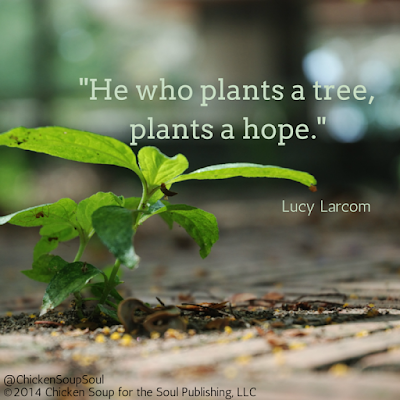 Boone Hall was founded in 1681 by Englishman Major John Boone, and it was his son who planted the 88 live oaks in 1743. It took nearly two centuries for the trees to become large enough to form a canopy over the road, and this Avenue of Oaks extends for 3/4 of a mile. 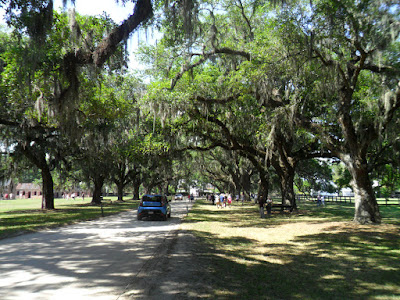 A view of the canopy from the car. Believe, me, it looks a lot more impressive in person than it does in this picture. 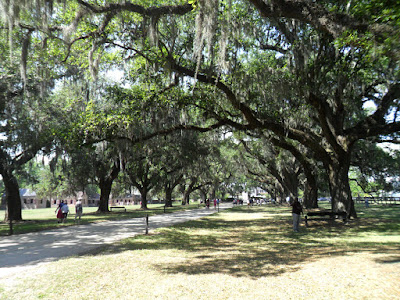 This one was taken on foot. A little better. 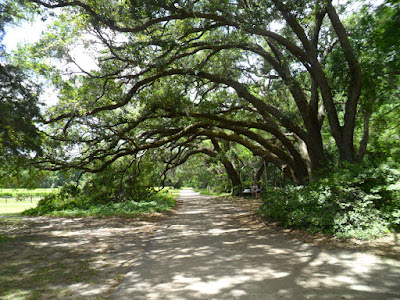 The Avenue of Oaks offered the most concentrated grouping of live oaks on the plantation, but they weren't the only ones in sight. They were all over the place... and they were all gorgeous. 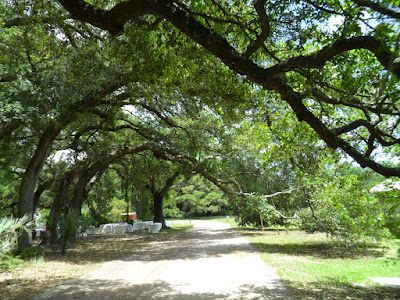 Last shot of the trees. I (ahem) tend to get carried away... 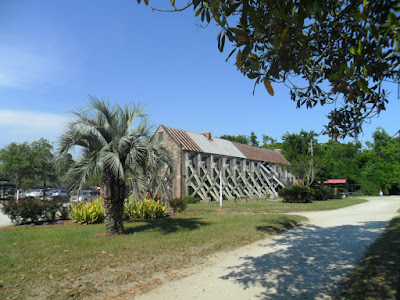 The old cotton mill (circa O-L-D) is an impressive-looking building. As you can see, it's currently undergoing some extensive restoration.

It's kinda funny that I took a picture of THIS, but not a single photo of the plantation house. Without a doubt, it is beautiful, but what I would've really liked to capture is its interior. The furnishings are magnificent, and the sunroom-like area is fabulous. Unfortunately, taking pictures inside was a no-no. The McRae family purchased the plantation in 1955, and a year later, the family began allowing tours. Family members still live on the upper level of the home... which was not part of the tour. Although the number of farmed acreage has shrunk over time, Boone Hall remains America's oldest continuously working plantation. 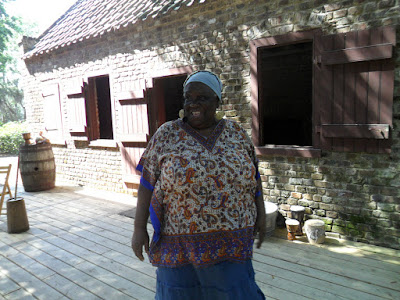 A handful of original slave cabin remain, and they're all made of bricks... which were made by the slaves themselves. In fact, millions of bricks were made on the plantation, and they were used to build many important buildings in Charleston and far beyond. Ft. Sumter was constructed of bricks that were made at Boone Hall.

Each of the remaining cabins has been converted into small museums, each one telling a different chapter in the story of  African Americans. This gal in the picture told the story of the Gullah people, and her presentation included some awesome music. Man, does she ever have some pipes! And she sang a little bit of everything...

I delighted in the music of Africa, the earliest of the slave plantation songs, the transformation into Christianity and all that Christianity brought to the lives of the Africans who were forced to come to America. [Harry Belafonte]

I'm a little sorry I didn't take more pictures. I guess I was too busy taking in the experience to bother recording much of it. Sorry... how selfish of me not to think of you guys. HA! Here... maybe this short video will make up for it. (And I don't know how the sneaky fella got away with taking a couple shots inside of the house. I wish he would've gotten the darned sunroom!) 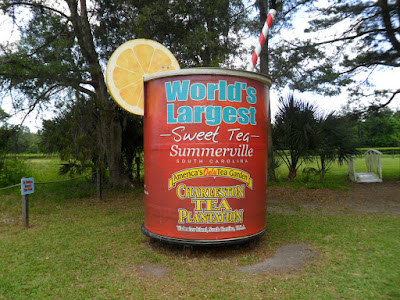 The other plantation we visited was the Charleston Tea Plantation... the ONLY large-scale commercial tea plantation in America. There, we toured the area where the tea is processed, sampled all kinds of their awesome teas, took a wagon ride all around the plantation, learned a ton of stuff about tea, and... came home with a whole grocery-sized bag full of teas. (Which I'm drinking my way through quite handily. I just ordered some more of their loose leaf tea from Amazon. The peach and mint are my favorites.) 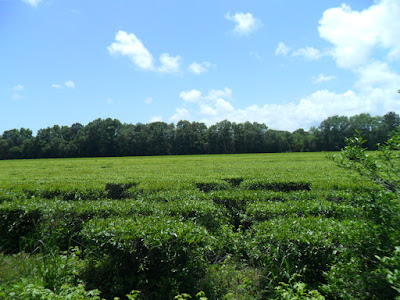 This is one of the many fields of tea. See how flat the plants are on top? That's because the process of harvesting entails skimming off a couple inches of new growth at the top of the bushes. Every plant on the plantation today is the offspring of the plants originally brought to South Carolina in the 1700s, and for hundreds of years, each plant has been grown from shoots, which are nurtured in greenhouses for four years before taking their place in the fields. 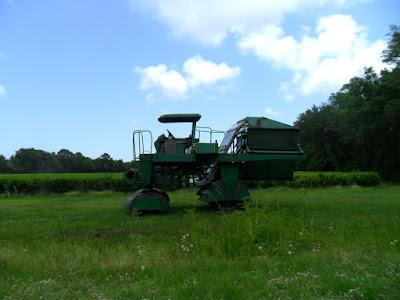 This funny-looking contraption is called the Green Machine,and it was built specifically for harvesting tea. There are only a few of them in existence in the world, and each machine can do the work of 500 people. Where people would have to carefully pick the new growth leaves from each bush by hand, one at a time, this machine gently slices off that new growth and tosses it into a bin.

Did you know the three basic types of tea all come from the same plant? The difference between black, oolong, and green tea lies not in the tea, but in how long it's processed after it's picked.

SOME FUN FACTS ABOUT TEA:

P.S. Many thanks to all of you who left a comment on my last post, even though I wasn't available to respond. I appreciate the heck out of it. And you. We were chilling in western North Carolina with some friends who live at the top of a mountain. Lots of fun, and after seeing bear scat up there, I won't be grumbling so much about the piles neighborhood dogs leave in our yard. And Geo? Your comment gave me cause to pause, but although your account is terrific, our Huong was most definitely trying to get a rise out of me. :)
Posted by Susan Flett Swiderski at 12:34 AM