More Than a Number

Thought for the day:  Time is but a stream I go a-fishin' in.  I drink at it, but while I drink, I see the sandy bottom and detect how shallow it is.  Its thin current slips away, but eternity remains. [Henry David Thoreau] 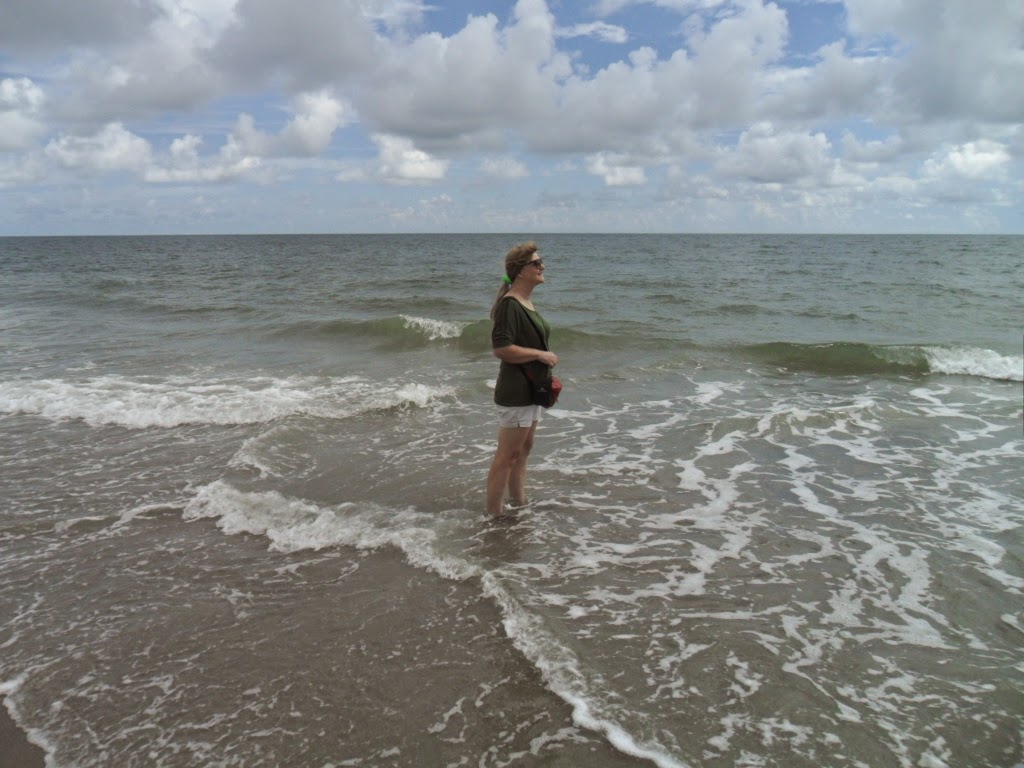 I didn't just want to go fishing in it; I wanted to stand in it. I wanted to feel the waters of time swirl around my feet, to be made poignantly aware once again of its dual nature of fleeting and eternal. I wanted to hear the haunting call of the seagulls, and breathe in the distinctive briny scent of the ocean. And five years ago...when Smarticus took this picture of me at Myrtle Beach... he and and our friends Kati and Cliff allowed me to do just that. Even though none of them share my passion for the ocean, they indulged me by granting me some time to stand in the surf and replenish my soul. I appreciated it more than I could say. Having them do that for me was humbling and made me feel cared for.

Recently, while struggling to keep my footing in a surf of swirling emotions, I momentarily felt as alone as I look in that photo. As a number of you already know, Smarticus... AKA Mike... my Number One and only... went into the hospital last week. Watching that ambulance take him away and knowing that because of coronavirus safety precautions, we can't see each other while he's there, was as painful as a kick in  in the solar plexus. With a steel-toed pointy boot. But thankfully, that devastating feeling of being totally alone has passed.

Our kids and friends circled the wagons, reminding me that I'm not alone at all... and that circle includes you guys. I'm humbled by your expressions of concern, and I appreciate your outreach more than I can say. Thank you.

We can... and do... talk on the phone multiple times a day.  He's been getting treatments to ease his pain and make him more comfortable, and he'll be transferred to an acute physical therapy place today, where the hope is to get him back on his feet again so he can come home. Believe me, if anybody can accomplish that, he can. Then we'll be ready to tackle whatever comes next. For more than 51 years, I've leaned on him, and now it's his turn. He can relax and lean on me now, and much to my surprise, I've discovered that I'm more than strong enough to hold us both up. We've got this, and we're still laughing together... even if it's only over the phone for now.

I'd planned to post the following video last Friday for Memorial Day, but you know what they say about the best-laid plans. But ya know what? It isn't too late to post it. I'm one of those strange folks who still thinks of Memorial Day as falling on May 30, as opposed to the last Monday of the month, so as far as I'm concerned, this post is right on time.

Yesterday's newspaper said we've now surpassed 100,000 deaths from the coronavirus here in the U.S. It's hard to wrap our minds around such a big number, isn't it? Hard to imagine such a profound loss. It's as difficult to assimilate the number of global deaths from this virus as it is to grasp the huge numbers representing the men and women who've died during wartime. Stark heartless numbers tend to dehumanize the reality of each of those individual deaths. In 2013, British artists Jamie Wardley and Andy Moss organized an amazing artistic endeavor called The Fallen that poignantly depicts the reality of the 9000 who lost their lives on the beaches of Normandy:


To those who died, honor and eternal rest; to those still in bondage, remembrance and hope; to those who returned, gratitude and peace. [engraved on the Illinois Vietnam Veterans Memorial]

[Yes, that's my hubby in the header pic... taken when he was a grunt in Vietnam. He's writing me a letter...]

Again, thank you all. Your caring truly lifted me up. And psssst... keep smiling. I am.