Thought for the day:  What does a grape say when you step on it? Nothing. It just gives a little whine. 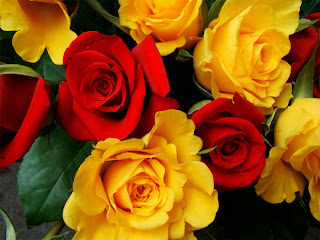 Yesterday, our forty-second anniversary, was absolutely rosy. My hubby isn't from Texas, but he should be, because he certainly believes in doing things in a large way. He gave me a kazillion flowers. Three bouquets of roses, and three big bouquets of mums. Gorgeous. To tell the truth, I would've been just as happy with a single rose, or a small bouquet of daisies, but you know what? There are sweet-smelling bouquets all over the house, and every time I look at one of them, I smile. He really is the wind beneath my wings.


Our trip to the Atlanta aquarium was fantabulous. Wind was happy to stand back and smile like an indulgent parent, but I joined the kids, and stuck my hand into the water at every touch tank so I could feel the sea anemones, sea urchins, horseshoe crabs, starfish, skates, and a bonnet head shark. Heck, why not, right? He didn't particularly care about touching any of them directly, but I very kindly shared as much of the wetness with him as I could get away with. I'm generous like that.


There were soooooo many cool creatures at the aquarium. The picture above shows a pair of wolf eels. The male looks like an old old man with no teeth. (Reminded me very much of a friend of ours.) Another tank had what they called a garden of eels. Looked kinda like grass at first, but it was actually a bunch of slender eels backed into the sand, with only their heads and parts of their body visible. 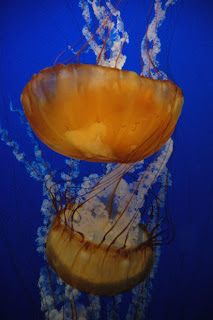 Sea nettles, or jellyfish, are no fun when they're wrapped around your leg, but when they're on the other side of a thick slab of acrylic, they're amazing.  Beautiful, delicate, and graceful, as though they're performing a slow motion ballet.

In spite of their size, the beluga whales are quite graceful, too. And their faces really make them look friendly, too, don't they? Kinda like a cross between a dolphin, a manatee, and a canary. (Don't you see something bird-like there?) And I know ... a cross between THREE different things? (Musta been a menage a trois.)

The whale sharks are the largest fish in the world. The four at the Georgia aquarium are about twenty-four feet long, but they can grow to more than forty. (So, yes, thank you, I DID look quite svelte in comparison.) One thing I found particularly interesting about them is that, in spite of their enormous size, their esophagus is only about an inch in diameter. So they pose no threat to the other fish swimming around with them.


Have you ever seen a sea dragon? They're even cooler looking than sea horses. Tiny ridges of cilia on the side of their necks and rumps move so quickly, they look like miniature helicopter rotors.

The Georgia aquarium is the largest in the world, and without a doubt, there's enough there to keep anyone enthralled for a day. Or more. (I can hardly wait to go back!) But here's the funny thing. As I was walking through this incredible place, loving every minute of it, I was also imagining it as an incredible setting for a book. Consider:


So, are you ever guilty of imagining the incredible places you visit as a setting for a book? Surely, I'm not the only one. Do tell. And if you have another idea for a funny title for a mystery based in the Georgia Aquarium, let's have it. (Oh, and you're welcome to the book idea, too. Just mention my name in the acknowledgements, if you would ...)