Thought for the day: If it weren't for electricity, we'd all be watching television by candlelight. [George Gobel]

And if it weren't for telephones, I reckon we'd all be sending smoke signals.

To tell the truth, I had no idea what I was gonna write about for today's post. Oh, I had a few nebulous ideas, but nothing that stirred much enthusiasm in me.

Then Monday happened, and serendipity struck.

When I went to my ophthamologist last week, she prescribed another eyedrop to add to my daily regimen, and told me to come back in a month to have the pressure remeasured.The staff kindly made a return appointment for me, and I went on my merry way.
That afternoon, Smarticus' next surgery was scheduled, and you guessed it... it fell on the same day as that aforementioned appointment.

No problem, right? I simply went online and canceled the appointment, and figured I'd make a call to the (ugh!) appointment center on Monday to reschedule.

OY! Big problem! First, after dutifully entering all the required information into the automated system, the robo-voice told me all lines were busy, and there'd be a wait of anywhere between 56 minutes and an hour and 23 minutes... (Where do they come up with arbitrary numbers???) so did I want someone to call me back. To sweeten the offer, I was assured that I "wouldn't lose my place in line." A no-brainer, right? So I left the required information, and about two hours later, give or take, I got that promised call-back. Cool, huh?

Nope. Not cool. An automated voice once again informed me that all lines were busy, but the next available assistant would take my call. (Why, why, WHY did they call me back, if they were only going to put me on HOLD again?) Silly naive me thought it'd only be a short wait. After all, I was next in line, right?

I gave up after waiting for more than an hour, and I've gotta tell ya, it gave me enormous pleasure to slam my phone receiver back into its cradle. (One of the pleasures of owning a landline. Also... I have NEVER accidentally dropped my phone into the toilet or run it through the washing machine. Just saying...)

Then I took the phone off the hook. Phooey on 'em! I had stuff to do, dammit!

And I was MAD! SOOOOO mad, I wanted to punch the wall and scream. So natch, I did what any other perfectly normal weird irate writer would do... I wrote a silly poem that evening:

'Tis a sad and tragic story,
But one that must be told,
About a most unlucky fella
Whose call was put on hold.

A recorded voice informed him
There'd be a slight delay,
'But your call is quite important,
So please don't go away.'

Then began an endless loop
Of an irritating tune,
Plus timely saccharine assurances
That someone would answer soon.

Minutes passed, and then passed hours,
As life went on around him.
Yet still he sat, phone pressed to ear,
For his determination bound him.

The longer he waited,
The more he had to stay.
His call'd be answered any sec,
So he mustn't go away.

With zero sleep and little food,
He clutched his phone for days.
He began to hum that damnable tune,
And his puffy eyes looked crazed.

Then finally, on day twenty-two or three,
The music stopped; he held his breath,
And he heard a woman say:

'Thank you for your patience.
I'm so glad that you could stay.
Now won't you kindly tell me
What I can do for you today?'

'Your mattress stinks; I'll not return
To your crummy store Sweet Slumber.
I demand my money back!'
'So sorry, sir. Wrong number!"

On Tuesday, I played it smart. I called the dreaded appointment center first thing in the morning. So first thing, in fact, after dutifully entering all the required information into the automated system, I was informed that the place didn't open until 8 AM. (The slackers!) There was a happy ending, though. I called on the stroke of eight, and by golly, I was first in line, and the task was accomplished in a matter of minutes. From now on, I will ALWAYS make that call at 8 AM. Burn me once, shame on you. Burn me twice, shame on me.

So are automated telephone systems and being put on hold the banes of your existence, too? Oh, and let's not forget those delightful robo-calls. (I guess there weren't enough people being duped via email, eh?) If none of those things make it to the top of your pet peeve list, what does? (Why not write a poem about it? HA) And, ya know,  if we can't beat the system, we might as well laugh at it... 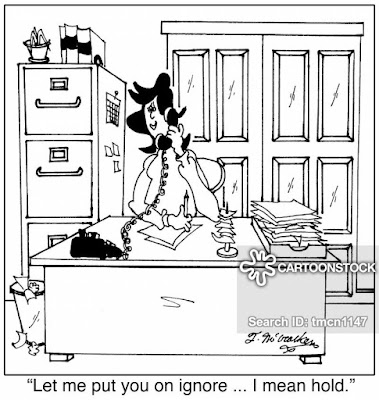 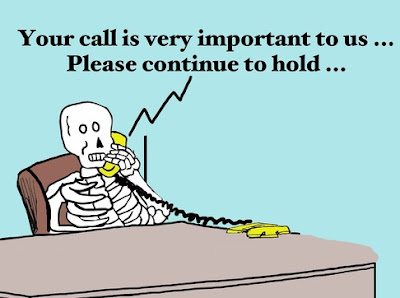 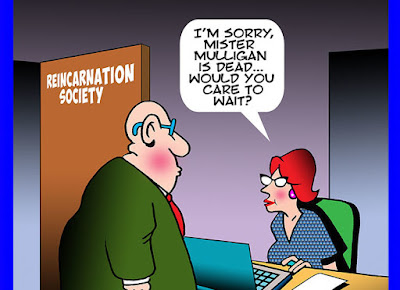 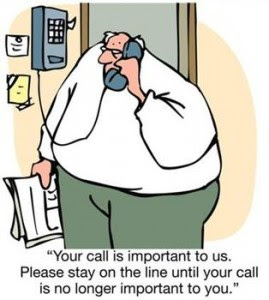 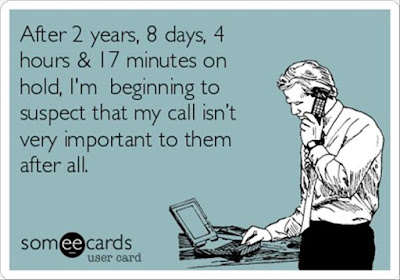 Kinda makes ya nostalgic for the good old days of telephone, doesn't it? Well, except maybe for those pesky party lines. You know... when you knew your nosy neighbor was listening to your call, because you could hear her open-mouthed  breathing. Oh, but remember those really sweet helpful operators? Remember... Earnestine?