I May Be Going Bananas

Hi, guys. I know. It's been too long, so I figured I'd pop in to say hi and give y'all a brief update before another month slips through my fingers. My daughter has been working reeeeeeeally hard, both with a physical therapist and on her own at home, and her progress is absolutely astounding. I'm so proud of her determination and good attitude. She was even able to shoot some pool a couple days ago!

And me? I'm doing well. Better some days than others, but mostly, I can't complain. Thanks to some wonderful ham friends, all the antennas and towers that were at the side of the house got dismantled last weekend. Woo HOOOOOOOO!!! Still more antennas and towers to go, but this is a huge step. (I haven't seen the naked side of my house in years!) Hams are the BEST. Really. I've gotten lots of other stuff done, too, but no need to bore you with the details. One kinda neat thing... my neighbor mentioned that he was going to buy a riding lawn mower, and I told him he could just use mine... and asked him to give me a brief tutorial so I can operate it, too. Get this. He's gonna use my mower, but he's also gonna maintain it... and cut my grass! Win-win for both of us! Life is good.

I started writing the following post one year ago today. I got about half of it done, but then Mike got sicker, and I wasn't in the mood to finish. Now is its time. Might as well... I'd already done the research and taken notes. HA. No promises, but I'll try to get back to the blogosphere a little sooner next time. Y'all take care. I love you guys.

Thought for the day: The older you get, the better you get. Unless you're a banana. [Rose Nyland] 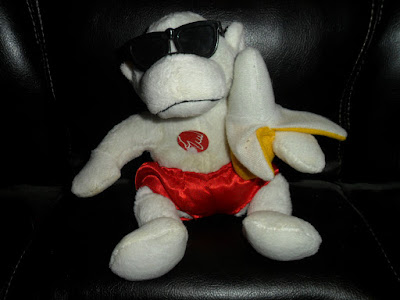 Some of you may remember this cute little guy, because I've shared his picture with y'all before. Mike (AKA Smarticus) gave him to me for Valentine's Day about a thousand years ago. Give or take.
Anyhow, when you squeeze the monkey's belly, he gives a wolf whistle and says in a raspy dirty old man kinda voice, "I go bananas over you!"( If he had eyebrows, they would've wiggled, I'm sure.)
The monkey's voice is fading and is growing more and more muffled, but he still looks good as new. Even his banana looks pristine. Which is a lot more than I can say for the bananas I bought at the grocery store a couple days ago. I swear, if I ever get a speeding ticket on the way home from the grocery store, it'll only be because I was trying to get home before the darned bananas turned brown. 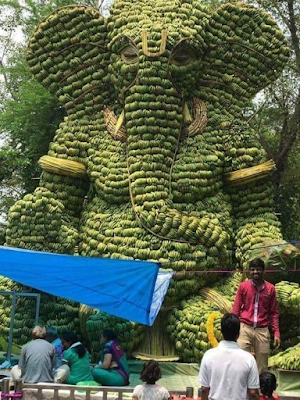 A ham radio friend emailed me the picture on the right, which he described as a giant elephant made out of bananas.
First thing that came to my mind was that a heckuva lot of people must've worked on THAT project. I mean, just think about what it'd be like if anyone ever tried to pull off a feat like that single-handedly. Before the poor slob even made it to the halfway point, the first bananas he'd put in place would've already mutated into smelly oozing gobs of brown mush that he'd have to replace. Impossible, I tell ya!  It'd be like trying to fill a bottomless bucket with water. Oh, and don't forget the fruit flies. The smell of overripe and rotting bananas would attract fruit flies like... um, flies. Yeah, exactly like flies. Those annoying little boogers would magically materialize out of nowhere, and they'd establish a brand new thriving community faster than a hungry gorilla can inhale a banana .
So, um no. Not gonna try that. I'll happily bake some banana bread or a decadent banana cream pie, but ix-nay on the banana-building with a bunch of rapidly rotting bananas... while being swarmed by fruit flies.
But what would be fun is... a banana CAR. You know, like the famous Oscar Meyer weinermobile... only instead of a rolling hot dog, it'd be a rolling... banana. I find that idea rather... a-peel-ing.
Evidently, a guy named Steve Braithwaite liked the idea, too.
This self-proclaimed goofy fella decided about a decade ago to up his eccentricity credentials by creating a unique vehicle to tour around the U.S. and spread joy. He wanted something totally ridiculous and fun. Looks like he got just what he wanted, dontcha think? Built on the chassis of a 1993 Ford pick-up truck, this impressive never-rot banana mobile measures twenty-three feet long and is 9.8 feet tall. Like everything else, the pandemic has changed things for this adventurous gent, but no doubt, as conditions improve, I reckon he'll be able to resume his appearances at fairs and festivals all over the country. His license tag? SPLIT.
Hmmm, which reminds me... do you know why the banana split?
He had artistic differences with the rest of the bunch.
And how about the banana smoothie?
He's the one who gets all the girls.
Ever hear of shoes made out of bananas?
Yep, they're called slippers... (Totally nonfriction!)
Okay, how about some fun facts about bananas?
There. Now you know far more about bananas than you ever cared to know. You're welcome.
Until next time, take care of yourselves. And each other.
P.S. The picture of the giant elephant made out of bananas that my friend sent me is actually a depiction of the Hindu god Ganish, made of green bananas. It was created in Odisha, India, in 2017, and at the conclusion of a 10-day festival, the ripened bananas were then distributed to the poor.
Posted by Susan Flett Swiderski at 4:30 PM