Thought for the day:  Feeling gratitude and not expressing it is like wrapping a present and not giving it. [William Arthur Ward] In the United States, we celebrated Thanksgiving yesterday. I suppose from an alien's point of view, some of the traditions associated with that holiday are a bit... strange. As an earthling, I think there's something a teensy bit strange about it, too. I mean, the idea of an annual holiday centered around the expression of gratitude sounds oh-so nice on the surface, but why isn't gratitude something we express every day? Isn't every day filled with blessings? Isn't every day a gift and a miracle? We don't need to shove bread up a turkey's butt  or stuff ourselves to the point of misery every day, but I think the world would be a better place, and we would be infinitely more content earthlings, if we made a conscious effort to express appreciation for the people and things in our lives and to give thanks for them... every day.

Appreciation can make a day, even change a life. Your willingness to put it into words is all that is necessary. [Margaret Cousins]

That being said, I'm thankful for you guys. Really. You are all bright spots in my life, and I'm grateful we met through the wonders of the Internet. I'm thankful for humor, too, even if it's sometimes inappropriate. (My bad) I'm also grateful that you guys aren't all judge-y, because that means you won't be too terribly annoyed at me for a re-running the following post, which was originally published right before Thanksgiving, 2014, as Immortal Humor. Enjoy!

Thought for the day:  Running a cemetery is just like being President: you got a lot of people under you, and nobody's listening.  [Bill Clinton]

It isn't my fault. Really. It isn't. I neeeeever would have thought about writing such a weird post as this one is gonna be if it hadn't been for that darned article in the newspaper. Then again, maybe I would have. It has been said that I do occasionally suffer from bouts of sick inappropriate humor.

Anyhow, the article. It was a little bitty filler piece about this year's Atlanta Regional Commission's Developments of Excellence Award, which for the last fifteen years has been presented annually to the location deemed tops in the metro area for livability and sustainability, and for serving as a regional model for future growth. Sounds nice, right? Well, would you believe in this, its sixteenth year, the award was presented to... a cemetery? (Oooh, dontcha know, that had to have ticked off some of those big shot fancy pants developers.)

Now, don't get me wrong. Oakland Cemetery is a very nice cemetery, as far as cemeteries go. Lots of historical figures and famous people buried there... like famed golfer Bobby Jones, and author Margaret Mitchell (Marsh). Lots of really neat statues and such, too. And it's OLD... It was founded in 1850, so there are some really interesting old markers.

But does any of that equate to livability??? I mean, it's not like people are exactly dying to move into the place.

Oh shut up. You know what I mean. (hehe)


It isn't like people send postcards from the cemetery and tell everyone, Miss you. Wish you were here...

or Please stop by, and have a nice stiff drink with me. (Or maybe a tall cold one?)

Then again, maybe some people, some people with a sick inappropriate sense of humor would do something that over the top...

Somebody really really cool like Bob McCully, Pittsburgh's long-time wagster, satirical writer, producer, and top of the crop ad man. The Christmas cards he created every year always featured his unique brand of dark humor, but his family and friends never expected anything like the one they got from the 88-year-old in 2011. Because, you see, he was already dead. He died that August, and most dead men don't send greetings from the grave. But he wasn't like most men; he wanted to get one more laugh.

Thanks to a co-conspirator relative, four hundred people received one last memorable Christmas card from McCully that pictured him on the front, sitting in an office, talking on a telephone, along with the words, Hello, please don't call. I recently moved to a quiet neighborhood. And on the inside, it shows the gates to the Allegheny cemetery, his tombstone, and the words, My new place doesn't have a phone, and our gates close after dark.

Okay, so maybe that doesn't tickle your funny bone. Personally, I'd love to pull off something like that, but I can understand how the idea of reaching out from the grave might not be everybody's idea of fun. On the other hand, a lot of people who might not appreciate this kinda humor are fascinated by zombies. Whew. Not me. All that brain-eating is too hard for me to swallow. Maybe if they sipped tea and ate cucumber sandwiches or something, I'd feel a little better about them. And I think they should pick up after themselves, too. All those body parts left lying around is totally unacceptable. I'll bet their mamas taught them better than that. 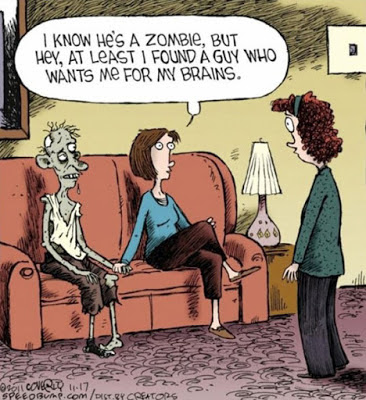 So, if not the walking dead, how about the sitting, standing, motorcycling, or kayaking dead?

Yep, that seems to be the new trend. Instead of being laid out in a coffin, some people are opting to be... posed, so they can make their grand exit doing something they love. A lady in New Orleans was staged sitting at a table with a can of Busch beer in one hand and a menthol cigarette in the other. A Puerto Rican boxer stood in a boxing stance... wearing his boxing gloves, trunks, and hooded robe. There are lots more examples; there are even quite a few images to be found online, if you're curious. I chose not to post any of those pictures. (See? I have some class.)

Kinda made me wonder how I might like to be posed. Reading a book? Sitting at the computer? Singing a song and dancing the fandango? Nah. How about taking a nap? In a coffin...

Actually, I don't want a coffin, either. Like many others have chosen, I'm going with cremation. We've prepaid, and cheap frugal person that I am, since I'm a universal donor, I'm kinda hoping Smarticus might even get a rebate.

But ya know what would reeeeally be cool? There's a company in Alabama called Holy Smoke, and you know what they do? Mix cremains with gunpowder and then use it to pack shotgun shells or rifle cartridges. Then, Smarticus could take me to the shooting range with him one last time. Talk about going out with a bang...


Okay, I'll stop now. I hope I haven't offended anyone. Like everyone else, I've lost many dear friends and family members over the years, and of course, I grieve for them. It's hard to let go of the people we love, and we miss them terribly. Being without them leaves an empty spot in our lives that nothing or no one else can fill.  But I don't think death should be a taboo subject or free from humor. Nor is it something I fear.

Nothing to fear. Rabindranath Tagore put it so very beautifully: Death is not extinguishing the light; it is only putting out the lamp because the dawn has come.

I plan on burning the lamp as long as possible, but always remember: there's joy in the morning.

Elisabeth Kubler-Ross said, I've told my children that when I die, to release balloons in the sky to celebrate that I graduated. To me, death is a graduation.

Sounds good to me. As long as we don't have to wear one of those stupid tasseled mortarboards.


Posted by Susan Flett Swiderski at 12:34 AM