Thought for the day:  Here's what I've learned about raising boys— if you keep 'em busy, they're fine. You let 'em get bored, they'll dismantle your house board by board. [Kenny Rogers]


Have you ever noticed how puppies... and little boys... play? Lots of similarities there. The exuberance... the horseplay... the unending energy... the smell. For sure, our sons loved to horse around like a couple of over-sized puppies when they were growing up. Matter of fact, even when they were well into their twenties, if the two of them were visiting at the same time, it was a pretty sure bet that they'd eventually end up rough-housing, which usually involved some loud bumping into and bouncing off the walls. Then when they got older, they traded in the rough-housing for arm-wrestling and competitive weight lifting, which even drew Smarticus into the fray. Must be a guy thing. My daughter and I would never compete like that... unless you count board games. 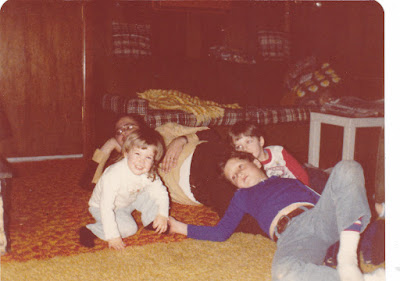 We've come a long way since I took this picture of Smarticus and the kids back in about 1980 or so. Now the boys have kids of their own, who undoubtedly do their fair share of bouncing off the walls. Especially the boys.

Because, as anyone can tell you who has raised both boys and girls, boys and girls behave very differently. (As if they really are from two different planets at times.) All blessings in their own right, but let's just say that boys can also be rip-roaring odoriferous rambunctious challenges. (And I wouldn't have it any other way!)


At some point, one of our sons went from enjoying bath time to expending entirely too much energy trying to weasel out of it. Once, he even went to the trouble of filling the tub without actually bothering to put so much as a toe into the water. He just hung out in the bathroom for a while... reading a book. Then after what he deemed to be an appropriate amount of time, he let the water out and emerged in his clean pajamas. If he hadn't been so darned dirty, he might've gotten away with it.

Why is it with boys, when you tell them to wash their hands, you have to specify that they should use soap? Never mind. Silly question. Our son didn't even think he needed water...

Anyhow, raising children can teach parents all kinds of lessons. Not always things we want to know, mind you, but lessons nonetheless. I'm pleased to say we didn't personally experience all of the things on the following list of things parents learn by raising boys: 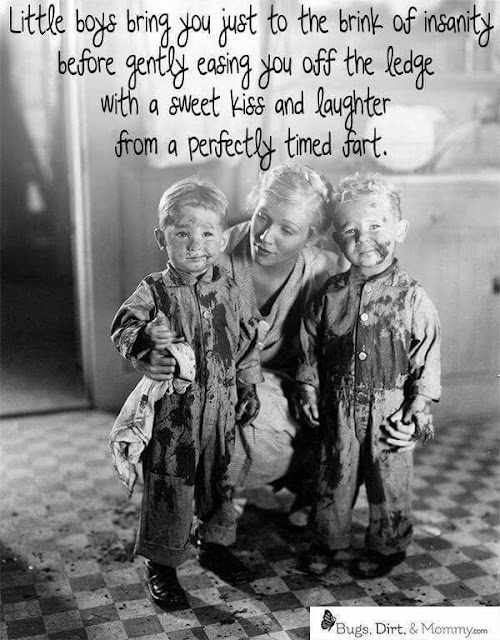