Thought for the day: You know you're getting old when the candles cost more than the cake. (sigh)

If you folks in the southeastern part of the United States happened to see a massive glow in the sky yesterday, fear not. It wasn't Armageddon, or anything. The blaze atop my birthday cake just got a teensy bit out of control is all. (I TOLD Smartacus not to use a blow torch to light all those darned candles.) Anyhow, the fire department must be getting real tired of coming by the house every year to extinguish the bonfire, so I think we'll skip covering the cake with candles from now on. The truth is, I'm creeping ever closer to that age where there'll once again be a single candle on my cake, and everybody will tell me what a good girl I am if  I can summon enough hot air to blow it out in a single try.

Know what? Maybe it'd be better to skip the cake altogether, and just have a glass of wine.


Youth is the gift of nature, but age is a work of art.  [Stanislaw Jerry Lec]
(Too bad my work of art is being painted by Picasso...)

I'm happy to report that my inner child is still ageless.  [Jane Broughton]
You can't help getting older, but you don't have to get old.  [George Burns]

So maybe we can't do a thing about getting older, but do you think a single candle can make much of a difference? I do. (For one thing, there's no need to call the fire department...)

Okay, I'm gonna be serious for a minute, because I want to tell you about a very special woman whose single candle radiated enough light to hold the powers of darkness at bay. Her name was Irena Sendler, and she truly embodied the Chinese proverb: It is better to light a candle than to curse the darkness.

This is what she looked like in 1942, when the young Polish Catholic woman lived in German-occupied Warsaw. As a social worker and nurse, she was allowed to enter the Jewish ghetto. She saw their suffering first-hand, and knew that people of all ages were being  forcibly removed from their homes, never to return. And she also knew what the penalty was for trying to help them.

She knew what the penalty was, because signs like this were posted all over Warsaw.

These signs issued a clear warning that helping anyone leave the Jewish settlement without authorization was punishable by death.

And yet...
And yet, the dark plight of the children tore at her heartstrings, and she had to DO something. As a member of the Zegota resistance movement, she smuggled 2500 children out of the Warsaw ghetto, provided them with false identities, and got them to a safe location... to private homes, to orphanages, to convents. She took the children out in ambulances, under the pretext that they were infected with typhus; she carried them out in tool boxes; she transported them in coffins. Whatever it took, she did it. One after another, desperate parents turned their beloved children over to her, a virtual stranger, in the hopes that their children would be spared from the horrors of living... and dying... in a concentration camp. Each child's name, Sendler recorded on paper, along with their new identities and locations. Then she tucked those papers into jars and buried them under an apple tree in her yard. Following the war, the information in those jars was used to reunite some of the families. Unfortunately, most of the parents were already gone, but thanks to Sendler and other members of the resistance, their children survived.

In 1965, Israel recognized Sendler as Righteous Among the Nations, a designation honoring non-Jews who risked their lives during the Holocaust to save Jews. And risk her life, she did: Sendler was captured, tortured, and sentenced to death... and spared from execution by virtue of a bribe. The Garden of the Righteous Among the Nations is part of the Yad Vashem complex on the Mount of Remembrance in Jerusalem.

At the entrance to the Garden stands the Tree of Irena Sendler. I don't know what kind of tree is it, but an apple tree would be perfect, wouldn't it?

This picture, taken in 2005, shows Sendler with the grown-up versions of some of the children she smuggled out of that Warsaw ghetto during the war.

In 2007, Sendler was presented with the Order of the Smile, an international award given by children to adults distinguished in their love, care, and aid for children. A year later, she passed away. 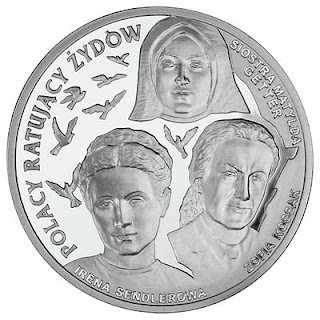 In 2009, Poland issued a commemorative coin in honor of three women. One was Irena Sendler, a woman who proved that one person... one candle burning brightly in the darkness... can indeemake a difference.

For my birthday, a present for you guys. Sorta. Both e-versions of my books are on sale for 99 cents. Woo HOO. (I would've made them FREE, but those darned candles cost a lot of money, ya know...) Clicking on the book images in the sidebar will transport you to Amazon. U.S. Amazon, that is, but the book is also on sale in the U.K.