Thought for the day:  North, south, east, or west, old traditions are the best. 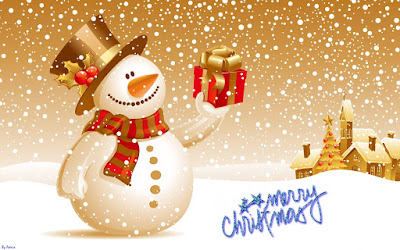 Hi-ya! I hope you all have the merriest Christmas ... and happiest Hanukkah... ever. Lots of love and smiles from our house to yours.

Talking about smiles, it's time for me to share that old chestnut Christmas post with you again. What can I say? Don't wanta buck tradition. So with a few revisions, here ya go... again... (Oh, and if you're here because you're looking for my WEP post, you'll find it one post back.) 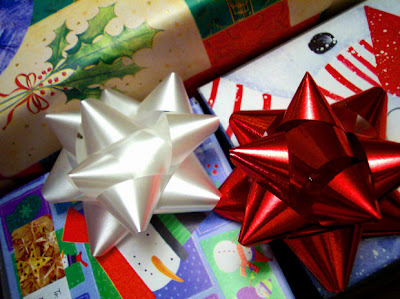 Traditions don't have to necessarily be classy, you know. Sometimes, they're just plain fun... or funny. Candlelight services on Christmas Eve, singing the Hallelujah Chorus with the church choir, and caroling with the neighbors... especially when it's snowing... those things are all both traditional and classy. This post? Not so much. But this is the eightth year I'm running it, so I think it has now officially become a tradition. Because I said so. And because I'm lazy it's just plain fun... and funny.


So, here it is, my classic tale, although not exactly in the same category as Dickens, about (ahem)  inflated dreams...


We never made a huge production out of outdoor decorations, but every year, our kids made the same grand proclamation after we cruised our decorated-out-the-wazoo neighborhood on the way home from the candlelight service on Christmas Eve.

"The best one of all!" they'd lie as we pulled into our driveway.

Okay, so maybe they weren't really lying through their braces. Maybe anticipation of the hidden presents awaiting inside added a certain luster to their perception of our decorations.

Anyhow, I'd say decorating styles can pretty much be divvied into three categories: traditional, enlightening, and inflated. Us? We're traditional. That means, except for an occasional new acquisition, I've pretty much used the same decorations every year. For a LOT of years. Like the ornaments that hung on my parents' tree when they were first married, some of which are now paper thin, and considerably faded with age. And a slew of decades-old goodies fashioned by our children with copious quantities of felt, glue and glitter, construction paper, walnut shells, clothespins, eyeglass lenses, and even a Mason jar lid. A black spider in a golden web and a huge decorated crab shell, both made by my sister-in-law. Boxes of tinsel painstakingly applied, strand by strand, and then painstakingly removed to store in a box for yet another year. Like I said, traditional. Well, to be more accurate, I suppose we've become more traditional cum lazy, because each year, I use less and less decorations, and some of them don't even make it down out of our attic anymore. This year, very few decorations found their way out of the storage boxes. (A RED tablecloth counts as a decoration, right???)


Everybody knows the enlightening type of decorator. They're the ones with so many lights blazing in their front yards, they risk causing a blackout across three states every time they turn 'em on. Very flashy. Sometimes, they even incorporate animation and music, too, and carloads of people stop by every night to ooh and aah over their winter wonderland. It isn't at all unusual for a competition of sorts to begin when multiple enlighteners live in close proximity. (Those neighborhoods can be seen from the space station.) 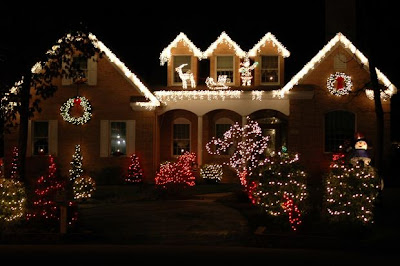 We're more like the house on the right these days: 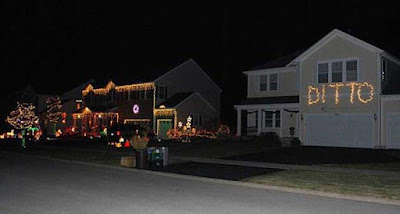 And then, there's the inflated. This is a fairly recent category. I sure don't remember seeing this sort of display when I was a kid. Nowadays, you can purchase just about any character you can think of ... inflate it ... and stick it on your front lawn. And if you can't find a particular character, for the right price, you can probably have someone make one for you. Then, all those characters can weave and bob all over your yard. 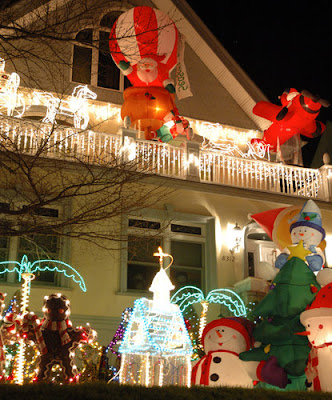 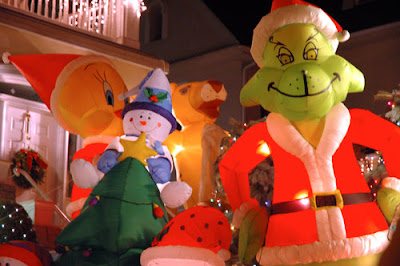 Now then, to the point of today's post. Time for a tale about a Christmas inflatable of an entirely different ilk. This story originated in 1999, and was alleged to be the winning entry to a Louisville Sentinel contest about the wildest Christmas dinner. Turns out, no such newspaper ever existed, and the writer remains unknown, but the story lives on, thanks to the good ol' Internet. (WARNING: Better put your drink down before you read it.) Now here, after a bit of minor editing on my part, is that story: 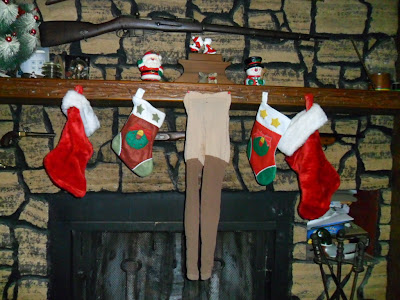 As a joke, my brother Jay used to hang a pair of pantyhose over his fireplace every Christmas Eve. He said the only thing he wanted was for Santa to fill them, but what they say about Santa checking his list twice must be true, because every Christmas morning, the other stockings would all be bulging with treats, but Jay's poor pitiful pantyhose were always left dangling as empty as ever.

So one year, I decided to make his dream come true. I put on sunglasses, a fake nose, and a ski cap, and went in search of an inflatable love doll.

Know what? They don't sell those things at Wal-Mart. I had to go to an adult bookstore. By the way, if you've never been in an X-rated store before, two words: don't go. You'll only confuse yourself. I was there for an hour saying things like, "What does this do?" "You're kidding me!" and  "Who would buy that?"

So anyway, I finally made it to the inflatable doll section. I wanted to buy a standard, uncomplicated doll that could also substitute as a passenger in my truck so I could use the car pool lane, but finding what I wanted was difficult. Love dolls come in many different models. The top of the line, according to the side of the box, could do things I'd only seen in a book on animal husbandry, but I settled for the bottom of the price scale: Lovable Louise. To call her a doll required a huge leap of imagination.

On Christmas Eve, with the help of a bicycle pump, Louise came to life. My sister-in-law was in on the plan, and she let me in during the wee morning hours. Long after Santa had come and gone, I filled Jay's pantyhose with Louise's pliant legs and bottom. I also ate some cookies and drank what remained of a glass of milk on a nearby tray. Then I went home and giggled for a couple of hours.

The next morning, my brother called to say that Santa had been to his house and left a present that had made him VERY happy, but his poor dog was very confused. She would bark, start to walk away, then come back and bark some more. We agreed that Louise should remain in her pantyhose so the rest of the family could admire her when they came over for the traditional Christmas dinner.

My grandmother noticed Louise the moment she walked in the door. "What the hell is that?" she asked.

My brother quickly explained, "It's a doll."

"Who would play with something like that?" she snapped.

I had several candidates in mind, but kept my mouth shut.

"Where are her clothes?" she continued.

"Boy, that turkey sure smells nice, Gran," Jay said, trying to steer her into the dining room.

But Granny was relentless. "Why doesn't she have any teeth?"

Again, I could have answered, but why risk it? It was Christmas, and nobody wanted to spend it in the back of an ambulance saying, "Hang on, Granny, hang on!"

My grandfather, a delightful old man with poor eyesight, sidled up to me, waggled his eyebrows, and said, "Hey, who's the naked gal by the fireplace?"

I told him she was Jay's friend, and a few minutes later, noticed Grandpa standing by the mantel, talking to Louise. And not just talking. He was actually flirting. It was then we realized this might be Grandpa's last Christmas at home.

The dinner went well. We made the usual small talk about who had died, who was dying, and who should be killed, when suddenly Louise made a noise that sounded a lot like my father in the bathroom every morning. Then she lurched from the pantyhose, flew around the room twice, and fell in a heap in front of the sofa. The cat screamed. I passed cranberry sauce through my nose, and Grandpa ran across the room, fell to his knees, and began administering mouth-to-mouth resuscitation. My brother fell back over his chair and wet his pants, and Granny threw down her napkin, and stomped outside to sit in the car.

It was indeed a Christmas to treasure and remember. Later in my brother's garage, we conducted a thorough examination to decide the cause of Louise's collapse. We discovered that Louise had suffered from a hot ember to the back of her right thigh. Fortunately, thanks to a wonder drug called duct tape, we restored her to perfect health.

After that, Louise went on to star in several bachelor party movies, and I'm pretty sure Grandpa still calls her whenever he can get out of the house.

Merry Christmas! May all your dreams... no matter how inflated...  come true.

Hanukkah is the festival of light that celebrates the triumph of light over darkness, of purity over adulteration, and spirituality over materialism. Whatever our religion or non-religion, these are all things worth celebrating, don't you think? Here's wishing you all much light... and love.


I'll be taking off the rest of the year, and will be back on January 2 for the IWSG post. 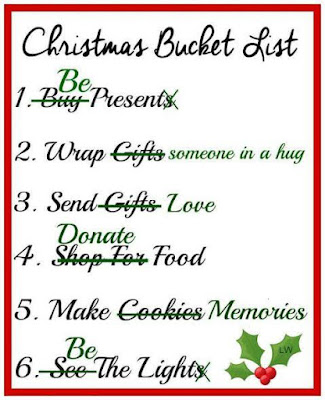 Posted by Susan Flett Swiderski at 12:30 AM

New comments are not allowed.