The Sounds of Silence

Thought for the day:  The laughter of a child is the light of a house.   African proverb 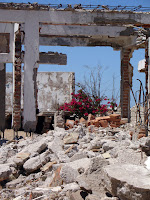 You wanta know what is it
Made this past week such a riot?
Seven grandkids came to visit.
But now ...
It's much too quiet.

It was both exhilarating and exhausting having the family here. First time in years all our chicks were back in the nest at the same time. And the first time we ever had seven grandchildren here all at once, too.  My hubby and I found out we both make pretty darned good jungle gyms, even if we do need to reach for the tube of BenGay later. And I learned, even though I have a competitive nature, I don't mind it at all when my granddaughters beat me at Candyland. I also learned that even though one of our granddaughters is almost as tall as I am, she still fits quite nicely on my lap.

Now, we're in what my hubby jokingly called recovery and damage assessment modes. The chalk drawings all over our driveway (and my car!) should last until we have a good rain, and I may leave the swirl of fingerprints on the screen door glass and living room TV for a few days, too. Seeing them makes me smile. They're a reminder of giggling grandchildren, shrieks of laughter, running feet, and gleeful shouts of  "Grandmom!" and "Grandpop!"  ringing through the house.

I miss them already.

While they were here, we did a little sightseeing, too. Like to the plantation at Stone Mountain, where our granddaughters were convinced we'd see ghosts. (My husband's eerie Woooooos didn't help that situation a bit.) We also went to a game ranch, where the kids got to interact up-close and personal with a bunch of different animals. However, that picture with the camel isn't of our grandson. It's just a picture that tickled my funny bone, and it comes to us courtesy of the cool people at perfecttimedphotos.com

It was a glorious week. But alas, even if I do leave the fingerprints for a while, I should probably go scrub the sticky kitchen floor before one of our poor cats get glued to it. They've suffered enough trauma. They, I might add, are deliriously happy to have their house back again.

In closing, I'd like to share a totally cool video with you that my brother sent to me. It shows an intimate view inside a robin's nest. It seems rather appropriate, because I can certainly identify with that mother robin when her nest was jammed full of her growing babies ... and when her nest was empty again. You can check it out here

Posted by Susan Flett Swiderski at 7:44 AM

Email ThisBlogThis!Share to TwitterShare to FacebookShare to Pinterest
Labels: grandchildren