On Doggies and Doggles

Thought for the day:  There never yet has been a dog who learned to double cross, nor catered to you when you won, then dropped you when you lost.  Mary Hale 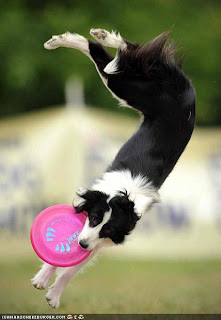 Dogs have almost always been a part of my life.

When I was very young, my parents had a shaggy dog named Tippy who was so timid, my mother had to stand over him with a stick while he was eating so other animals couldn't scare him away and eat all his food. Later, we had a teeny tiny dog named Dixie, and for a short while, a beautiful, but demented blond shepherd named Tiger. No matter how long a time we let Tiger outside, he was always extremely diligent about holding it until he came back into the house. Or, upon occasion, he was known to let 'er rip on the steps leading up to the back porch. Oh, and when he wanted in, he would charge up the steps and fling himself full force at the door, knocking himself half silly in the process. "Oh, that's fine," my father would say. "He's just a puppy," he would say. Tiger chewed up shoes belonging to my mother and me, ate a rosebush, thorns and all, and destroyed every piece of clothing hanging on the clothesline one day. Again, my father said, "That's okay. He's just a puppy." But when said pup chewed through the lead-in wire to my father's TV set, Tiger's little doggie bags were packed, and he earned himself a one-way ticket to a friend's place in the country. 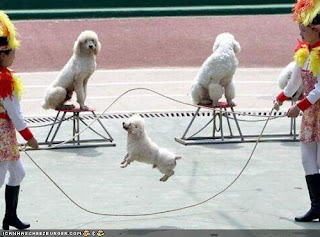 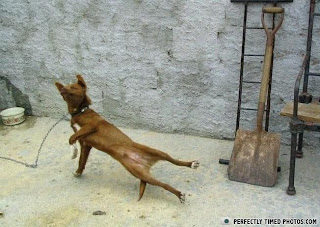 None of our dogs was ever particularly talented. None could jump rope or break dance, but our son had a springer spaniel who was quite good at catching a frisbee. Alas, when she died, our son tried to teach our next dog how to perform the same tricks, but all he managed to do was amuse the dog ... and us. He'd throw the frisbee and then go after it on his hands and knees and bring it back in his mouth, while Buck watched, and wagged his tail. My grandmother had a couple boxers who were quite beautiful, but their only talent was generating copious quantities of flatulence. For which my poor grandfather often got blamed.


Ours may not have been the most beautiful dogs, or the smartest dogs, but they were all loving dogs. But I'd like to tell you a little bit now about some truly amazing, highly-trained dogs. MWDs, or Military Working Dogs.

Cairo, a Belgian malinois, was part of the Navy Seal team that nailed Bin Laden. Until that story broke, I'd never heard of that particular breed before. Turns out, this breed is very similar to the German shepherd, but smaller and more compact. Although the military uses numerous breeds of dog, the shepherd and malinois are the most common, because of their keen sense of smell, endurance, speed, strength, courage, intelligence, and ability to adapt to almost any climate.

Even though dogs worked alongside soldiers during the Civil War and WWI, it wasn't until 1942 that they were officially inducted into the U.S. Army. Currently, there are an estimated 2800 active-duty dogs, and about 600 of them are serving  in Iraq and Afghanistan. 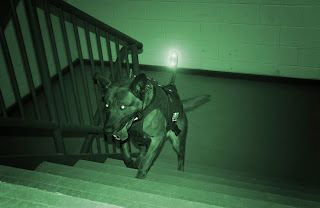 This picture, released by K9 Storm, shows what Cairo may have looked like when heading up the stairs in pursuit of Bin Laden. 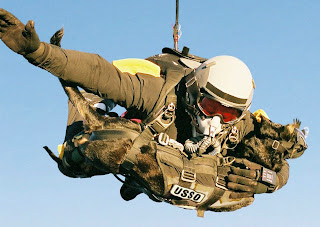 This pic, also from K9 Storm, shows military dog handler Mike Forsythe and his dog Cara, jumping from an airplane from a record-breaking height of 30,100 feet. Both of them had to wear oxygen to tackle this mind-boggling feat. Military dogs usually jump in tandem with their trainers, but with flotation devices, can make short jumps into the water on their own.

And just what is K9 Storm, you ask? It's a hi-tech mom-and-pop business in Winnipeg, Canada, that designs and manufactures canine body armor. How hi-tech, you ask? A tactical vest is fitted with infrared and night vision enabled cameras capable of delivering feed one thousand yards line-of-sight, and up to 200 yards through multiple concrete walls. Thanks to K9 Storm, the well-dressed MWD of today wears protective eye gear called doggles, body armor, life vests, gas masks, long-range GPS-equipped vests, and hi-tech flak jackets. 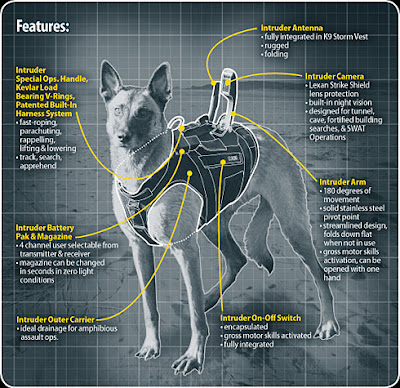 Plus, the standard K9 Storm vest also has a load-bearing harness system that works well for tandem rappelling and parachuting. As a point of interest, USAF dogs have been airborne for decades, but the earliest flying dogs were probably those accompanying Soviet troops during the '30s. 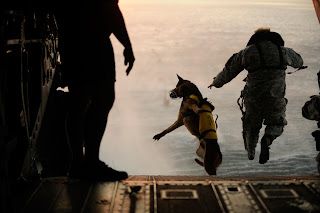 This picture, from Manual J. Martinez, of the USAF,  shows a jump from a Chinook CH-47, in a training exercise over the Gulf of Mexico. This dog is wearing a special flotation device.

These dogs are trained to detect explosives and hostile, hiding humans. Equipped with their cameras, they enter danger zones first, and allow their handlers to see what's coming before the humans venture forward. Like their human counterparts, dog SEALs, like Cairo, are not only highly trained, but also highly skilled, and highly motivated. And these heroic canines are loved and respected. 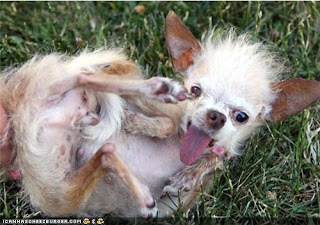 So, how about you? Not that you've ever had a dog who jumped out of airplanes with a parachute, (they can ALL do it WITHOUT one ... but only ONCE) but what nifty tricks could your favorite pooch do?

(And thank you to icanhazcheeseburger.com and perfectlytimedphotos.com for the use of their pictures.)

Money may buy you a fine dog, but only love can make it wag its tail.   Kinky Friedman
Posted by Susan Flett Swiderski at 6:00 AM