Thought for the day:  My friend told me to blow all the candles out in one breath. What kind of a blowhard does he think I AM, anyway? 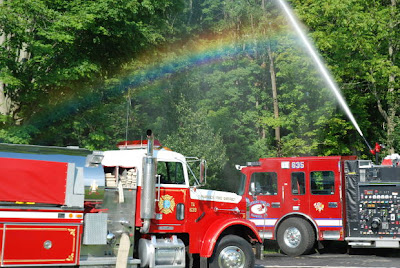 I forgot to warn my neighbors, so it's only natural they called 9-1-1 last week when they saw that fiery glow blazing inside our house. Actually, it was rather sweet of them, y'know? Caring. I mean, how were THEY supposed to know it was just my birthday cake?

Oh well, no real harm done. We ended up with a new front door, (The fireman's ax really shredded the old one.) and the carpets aren't nearly as soggy as they were a few days ago. And they needed to be cleaned, anyway.

Yep, last Thursday was my birthday. (yippee)  I'm past the age of getting excited about birthdays, although I've really been enjoying the cakes. (Got TWO of 'em. Hmmm, you think Smarticus had doubts about fitting all those candles onto one...?) By the way, I hope ya know I was just kidding about the firemen coming to the house. After coming the past two years, they knew better...

Anyhow, what I WAS excited about was the article I'd seen in the newspaper a couple months back saying that the Georgia Aquarium gives FREE entrance and dolphin show tickets to people on their birthdays. I mean, woo-HOO, right? You already know what I think about senior discounts so you can just imagine how I feel about FREEBIES. Especially if it involves something as neat as the Aquarium. Our first visit to the Aquarium was in May of 2011, so I was more than ready to go again. Before going, we checked online to see if there was anything we needed to know, like what we could and couldn't bring. No guns, knives, or lighters. Makes perfect sense. But my personal favorite? No fishing rods! That still cracks me up. 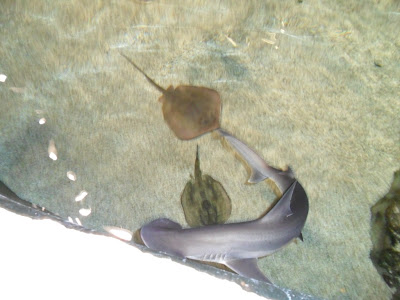 This is one of the touch tanks, showing a couple of horseshoe crabs, and a bonnethead shark. Last time we went, I touched every critter in every touch tank. This time, I restrained myself. More (ahem) mature, I guess. Nah. I was wearing long sleeves this time. 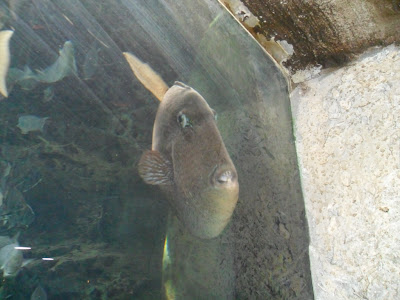 Isn't this guy too cute? Kinda looks like he needs to pay a visit to the orthodontist. Or not. Obviously, he isn't too self-conscious about his teeth. He smiled for me. 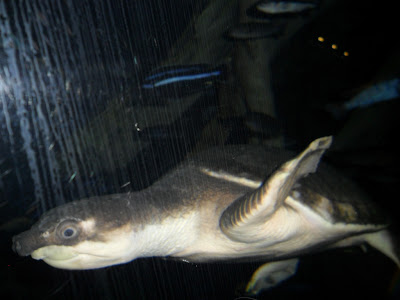 This guy has a lot of personality, too, doesn't he? Looks a tad frantic, like he's late, he's late for a very important date. 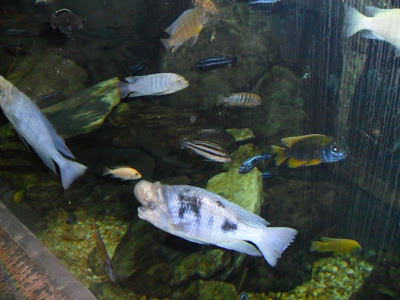 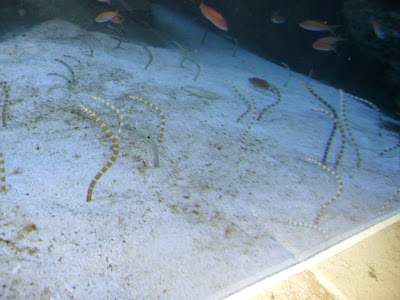 This is a garden... of eels. In the wild, some areas are supposedly so densely populated with them, the seabed looks like a wheat field. Um, with stripes. 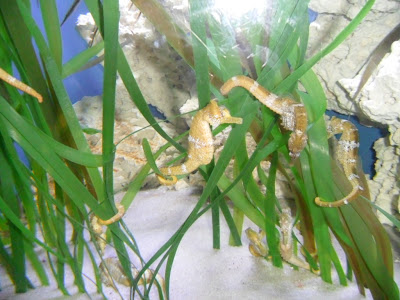 The seahorses were fascinating to watch... 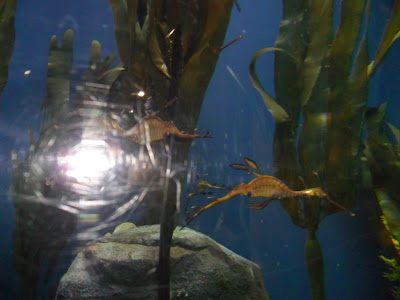 but not quite as fascinating as the sea dragons. (Sorry about the flash reflection.) These critters are absolutely amazing. And reeeeally fun to watch. 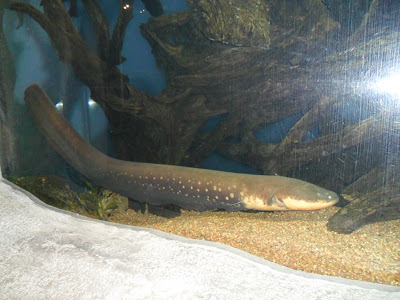 The electric eel is pretty neat, but I've gotta admit, the National Aquarium's display in Baltimore is much better. They have a meter and speaker on their electric eel's tank, so you can actually see the measurements of... and hear... the discharges of electricity. 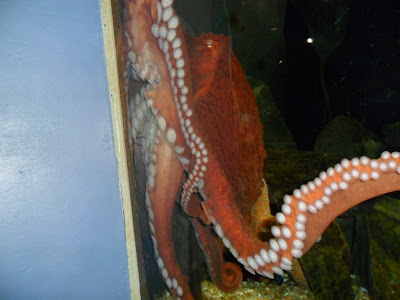 How about this octopus? Colorful character, isn't he? 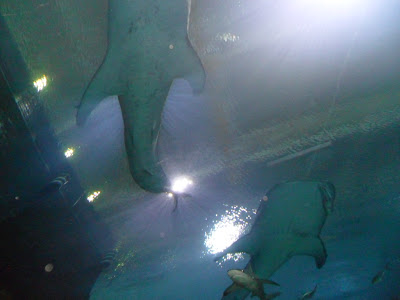 In the deep sea portion of the aquarium, you walk through a tunnel, with all kinds of creatures on either side of the path... and above it. I believe this picture shows the underbellies of a couple of guitarfish. Maybe their names are Fender and Gibson? (That's what I'd call 'em, anyway.) 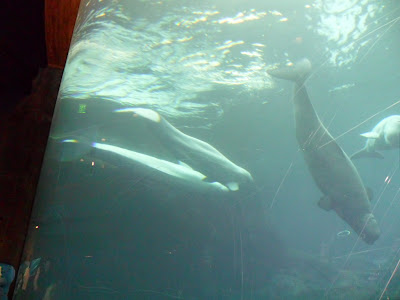 Here's some of the belugas. Really playful critters. So were the otters, both river and sea. But the most amazing animals were the dolphins performing in the Dolphin Tales show.   WOW! The divers working with them have some job! Can you imagine riding on a dolphin's back... or being pushed through the water at high speed by one... or "surfing" on one's back? One guy even stood on two of them... and rode 'em like a pair of skis.

Oh yeah, a group of Weeki Wachee mermaids put on a show right before the Dolphin Tales, too. That was okay, but a little bit of that went a long way for me. What I would have liked more of, though, is the animated 3-D movie... complete with special effects. The movie only lasted about fifteen minutes or so, but I was grinning like an idiot the entire time. I LOVED it! (The first time I felt a little splat of water, I thought it was my overactive imagination...) 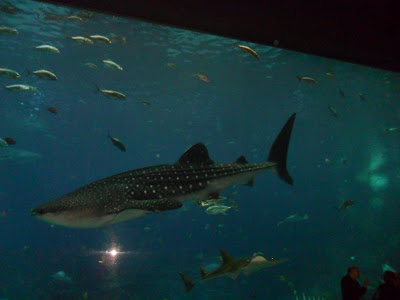 Four whale sharks are cruising around in the deep sea exhibit. In spite of their massive size, their tracheas are only about the diameter of a dime, so they don't pose much danger to the other fish in the tank. At feeding time, divers get into the tank in four rafts, and each raft has a different color feeding bucket... a specific color assigned to each shark. The whale sharks have been trained such that each seeks food only from the properly colored bucket. So no feeding frenzy. Quite civilized.

Bottom line? We enjoyed our visit to the Aquarium just as much this time as we did before. Even more.

And look what I found! Sorry y'all couldn't be with us last week, but how'd you like to take a virtual tour? I found quite a few videos on YouTube, but this one was my favorite. There's even a great shot of a sea dragon in it. Check it out:

Pretty neat, huh? And lucky YOU, I even found some videos taken of the Dolphin Tales show. Not sure how those folks got away with it, because no one was supposed to take any pictures or videos in there. But like I said, lucky YOU...


(sigh) It was a wonderful way to spend a birthday... to spend ANY day. I can hardly wait to go back. 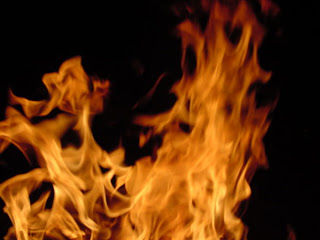 You know you're getting old when the candles cost more than the cake.