Thought for the day:  Massachusetts may be known by some as the baked bean state, but contrary to popular belief, the state's motto is NOT , "Who fahted?" 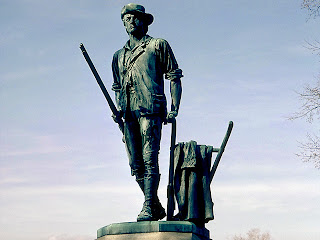 I'm not saying this just because of the Boston Tea Party; Massachusetts is thoroughly steeped in the early history of our country. For example, the statue shown at left, located in Minute Man National Historical Park, commemorates the Revolutionary War Battle of Lexington and Concord. From the early days of the Massachusetts settlement, all able-bodied men between the ages of sixteen and sixty had to serve in  the militia, which was a part-time citizen army, and I guess you could say the minutemen were like the Special Forces of their day. Drawn from the ranks of the general militia, these dedicated volunteers trained much more extensively, were expected to keep their arms and equipment with them at all times, and had to always be prepared to march at a minute's notice.

Just a quick handful of tidbits before we look at some pictures: Boston Common became America's first public park in 1634, and in 1636, Harvard became the first North American college. In 1789, William Hill Brown published The Power Of Sympathy in Worcester -- the book regarded as the first American novel. Birth control pills were invented at Clark University in Worcester, and the first Dunkin Donuts opened its doors in Quincy. (I suppose prior to the pill being invented, a donut held between the knees would do the trick.) 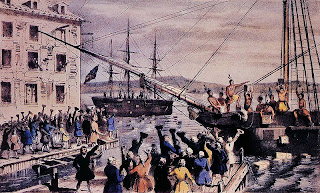 The Boston Tea Party is reenacted every year on December 16. At left is a picture of the Nathanial Currier lithograph depicting the original rebellion. 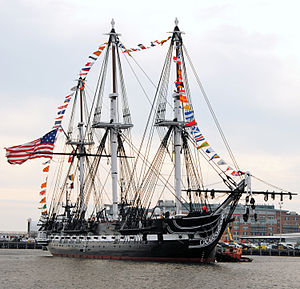 The USS Constitution, also known as Old Ironsides, is the oldest fully commissioned vessel in the U.S. Navy. First launched in 1797, it was retired in 1881, and has been overhauled several times since its berthing at Charleston Navy Yard. It was declared a Museum Ship in 1907. 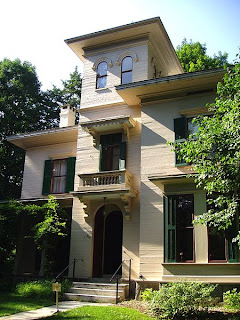 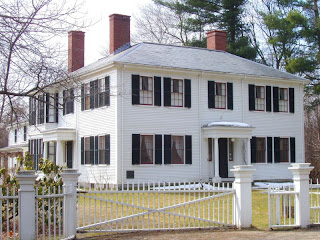 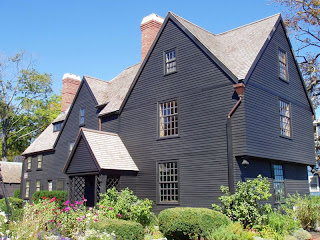 How cool is this? This house is the inspiration for Nathanial Hawthorne's House of Seven Gables. First built in 1668, the house was purchased and restored by Caroline Emmerton in 1908, and has been open to the public since 1910. 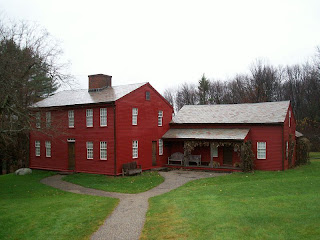 This is kinda like the home of the original hippies. In the 1840s, Amos Bronson Alcott founded Fruitlands Farm community, an experiment in communal living in a transcendental Utopian kind of existence. They were vegans, and the idea was to live off the land, and eschew that day's version of conveniences, (i.e. no hot water for bathing) but they found farming too hard, and the winter, too cold. The experiment folded after only seven months, but daughter Louisa May Alcott's book, Transcendental Wild Oats, tells her account of the experience.

Among other things, the Peabody Essex Museum contains 552 original documents pertaining to the 1692 Salem witch trials. 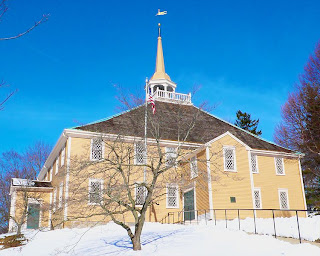 Hingham's Old Ship Church is the oldest church structure in the United States in continuous use as a place of worship, and the only remaining 17th century Puritan meetinghouse. 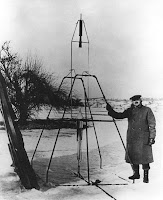 Robert Goddard, the Father of Rocketry and inventor of the first liquid fueled rocket, was born and spent most of his life in Worcester. Seen in the picture is Goddard with his first rocket, which was launched in nearby Auburn. 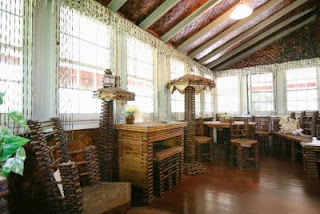 I'm as addicted to the newspaper as the next person, but have you ever heard of building a house with it? Talk about the original recycler! Built in Rockport in 1922, other than its wooden frame, floor, and roof, this house is made entirely of newspaper logs. The furniture is even made of newspaper, with the exception of a piano, which is decorated with the small logs. A grandfather clock is made from papers from the capital cities of the forty-eight continental states, and one desk is made of the Christian Science Monitor, while another is made from newspapers chronicling Charles Lindgergh's trans-Atlantic flight. Shown in the picture is the house's sunroom.


Okay, time to see what antiquated laws are still languishing on the books in this fine state. Oh, and a quick reminder: some of you have been baffled by the idiocy of some of the laws listed in past posts. They are OLD laws, some legislated centuries ago. Most are no longer enforced, but for reasons unknown, they haven't been removed from the books, either. I guess our legislators are too busy coming up with NEW laws to worry about the old ones. 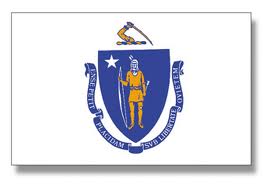 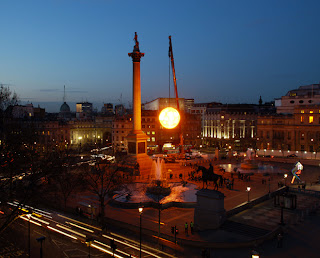 ***  London may have found the perfect antidote for the winter blues. This week, art collective Greyworld installed a giant fake sun right smack dab in the middle of Trafalgar Square. Commissioned by juice maker Tropicana, this man-made sun is thirty thousand times larger than a soccer ball, and as bright as sixty thousand light bulbs. (Dunno what wattage) The Tropicana Sun rose at 6:51 AM, and set at 7:33 PM, allowing plenty of time for hardy Londoners and tourists to relax on the provided deck chairs to bask in the illusion of warmth. 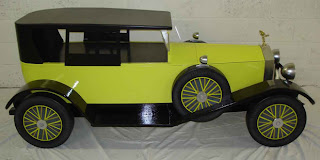 ***  Nice looking car, huh? Only it isn't a car. Not really. You could say it's for taking a body on its final ride from this world. Yup, it's a coffin. It seems some people are interested in a more unusual send-off than the standard wooden box. From January 20 until the 29th, some of these unusual coffin choices will be on display in London at an exhibit entitled Death: Festival for the Living. Some of the coffins look like such things as boats, cars, a big cocoa bean,  and a kite. After looking at the pictures, I've gotta say, some of those things (like the car) are too pretty to bury in the ground. Others? Frankly, I wouldn't be caught dead in 'em. 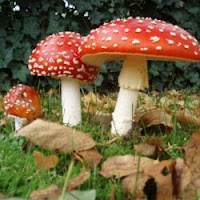 ***  Maybe those hippies of the '60s were on to something. Recent studies show that psilocybin, the active ingredient in magic mushrooms, may actually be beneficial, and may have potential for treating depression, anxiety, and even cluster headaches. What's more,  this psychedelic substance gives healthy people a feeling of extreme well-being, a spiritual connection to the universe, and a heightened sense of empathy, which can last for an amazing year or more. No wonder those hippies were all about peace and love, huh? I found it somewhat surprising to discover that there isn't just one type of these shrooms, but rather a multitude of them. Only one I'd heard about before supposedly grows in and around cow poop. So natch, when reading about these new studies, I immediately thought about politicians. I mean, if you think about it, politicians are the masters of cow poop, right? Not to mention the countless cluster headaches they cause. So I'm thinking, maybe some of our old hippies should visit Capitol Hill and prepare a huge vat of mushroom soup for lunch. ASAP. Maybe it's time for those folks to get off their red carpet and take a magic carpet ride.  Whatcha think?


Posted by Susan Flett Swiderski at 2:30 AM