Thought for the day:  Know why talk is so cheap? Simple. The supply always exceeds demand. 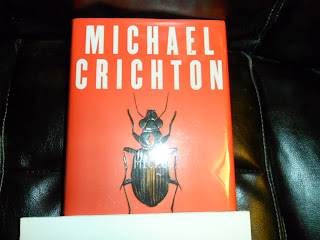 I'm a long-time Michael Crichton fan who read everything he ever wrote, both fiction and non-fiction, as well as the stuff he wrote under a pseudonym while he was still in medical school. He had a brilliant mind and keen imagination, so it was always fascinating and thought-provoking to see how he used valid scientific facts and principles to support his imaginative scenarios.

So, when I read in the newspaper that a NEW Michael Crichton book was about to be released, I was ecstatic, albeit a tad skeptical. You see, Crichton's dead.

But this NEW book, the publisher declared, was started by Crichton prior to his death. 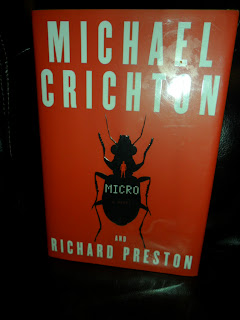 And writer Richard Preston merely completed it. Put the icing on the cake, the ribbon on the package ... however you want to say it... but Micro is being promoted as a Crichton book. His name, as you can see, is predominant on the book, and his name is what is selling this book.

But ain't no way this is a Michael Crichton book.

Imagine taking your child to an advertised recitation of nursery rhymes, only to see Andrew Dice Clay step out onto the stage. If you aren't familiar with Clay, go check him out on Youtube. I'm sure it's filled with his perverted versions of Mother Goose. HEY! Where you going? Not NOW! Finish reading THIS, and THEN you can go check out the perv. Sheesh.

Now then, as I was saying, this isn't even close to being a true Crichton book. If you're looking for a campy book along the lines of Honey, I Shrunk the Kids, filled with gory deaths, scientific fallacies, and lapses in logic, this is the book for you. But if you enjoy true scientific underpinnings and impeccable logic, you might wanta leave this one on the shelf. If I were Crichton's family, I'd want his name removed from this book.

[By the way, have you noticed how many big name writers have taken on co-writers these days? Patterson. Evanovich. Hmmm... oh, yoo hoo! I'm available, Big Name Writers, if anybody's interested ...]

Now, for the Real Deal.

I received a Kindle for Christmas, and immediately loaded it with books written by a bunch of my blogger buddies. The first book I read?

Ann Best's memoir In the Mirror.


I read somewhere that sorrow looks back, worry looks around, and faith looks up. Although one might rightly say that a memoir definitely looks back, there isn't so much sorrow in this book as there is looking up. A weaker woman might have abandoned hope when her beloved husband, and father of her four children, confessed his sexual attraction to men, and she might have thrown in the towel when he left her for one of them. A weaker woman might have succumbed to temptation when a kind and caring boss befriended her, or collapsed in grief when her daughters were in a horrific car accident. But Ann is not a weak woman. Buoyed by her abiding faith and the love of her family, she has prevailed. And continues to prevail. Her strength and faith are an inspiration ... a reassurance that there is, indeed, light at the end of the tunnel ... and her memoir, definitely worth reading.