Thought for the day: That which we persist in doing eventually becomes easier, not because the nature of the thing changes, but our ability to do it increases.  Heber J. Grant

That's a great thought to hang our hats on, isn't it? If we keep working at it long enough, hard enough, it'll get easier. No promise of actual success, but ... easier. To tell the truth, as difficult as it is some days to pick the perfect words out of my brain, I'd be pretty darned happy with easier. 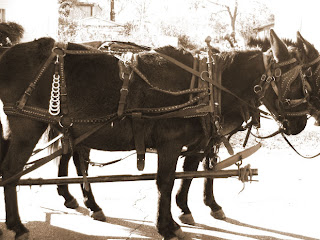 Things don't seem to get any easier for those mules, but they just put their heads down and keep on pulling that cart, no matter how heavy it is, or how far they have to travel. As writers ... no, as human beings... we have to train ourselves to do the same. We have to assume the stubbornness of those mules and keep on plodding. Oh, and have you ever seen how a mule flicks away flies with a flick of his tail? We've gotta do that, too. Don't let rejection bite your ass; just flick it away and try again.


Ah, but suppose we never make it to our hoped-for destination, you ask? Suppose the wheels fall off the cart, suppose we collapse? It's a sad fact, but not all of us who work hard at something will succeed. Let's say I have another twenty-five years left, and suppose I spend those twenty-five years writing books that never make it to publication. I say, so what? If I DON'T spend the next twenty-five years writing, I'll STILL end up twenty-five years older, won't I? That's the same argument as when someone says he's always wanted to be a doctor, but, oh dear me,  if he goes to medical school now, he'll be forty years old when he graduates. Well, if he doesn't go to medical school, he'll still be forty years old, only, more's the pity, his dream will still be unfulfilled. Where's the positive attitude in THAT? I say, as long as we're here, let's do what we love. Let's follow that passion. The very act of doing may be enough of a reward in itself.

Ok, you got me. So, maybe I am a tad full of caca. Sure, I'll admit it. I'd like to find a modicum of success with my writing. I'm no spring chicken, but I'd like to think I can still lay a golden egg or two before I head for that great big deep fryer in the sky. So, I'll keep at it. But the bigger point is, I'm enjoying it. And as long as it's enjoyable, I'll keep on doing it. We may not be sure of the destination, but we should always try to enjoy the journey. After all, we may not pass this way again.

And who knows? If the flowers in this picture are stubborn enough, and hopeful enough, to bloom in the midst of rubble, maybe we can, too, my friends. Maybe we can too. 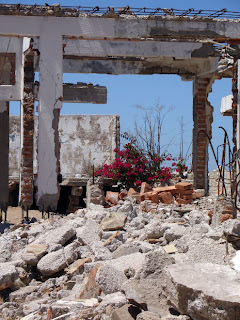