Thought for the day: A balanced diet is a piece of chocolate in each hand.

When I woke up this morning, rain was pitter-pattering oh-so-gently on the roof. What a soothing, snuggle-back-down-and-go-back-to-sleep sound to hear on a Saturday morning, right? But the not-so-gentle pitter-patter-thomp-thomp-CRASH of two cats tearing across my stomach, head, and around the bedroom, convinced me that sleeping in wasn't an option.

That's just one of the lessons our cats have taught me. You see, they don't care if the rain is pitter-pattering or if I had one too many glasses of chianti the night before. No sir, that doesn't faze them a bit. When they want breakfast, by golly, they want breakfast. 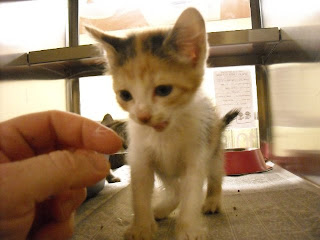 This is what Dash looked like when we first brought her home. She's considerably larger now, but still tiny compared to her "sister" inmate from the county shelter's Pen #10. She's our climber. Agile, fast, adventurous, and the most cuddly, loving-est kitty who's ever shared our domicile. She gives the sweetest little nose kisses. This morning, after she and her sister finished raising a ruckus in our bedroom, she played queen of the mountain on top of my hip and waited patiently for me to get up. 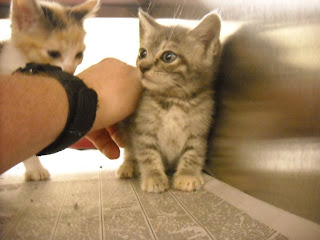 And this is what Dot looked like when we brought her home in 2009. (Get it? Dot and Dash? We're amateur radio operators ...) Anyway, she's four weeks younger than Dash, but is actually the larger of the two now. (I sometimes call her "Tankerbell"...) Let's just say that she's a BIG girl. Not nearly as agile or adventurous as Dash, and believe me, when she pounces on your stomach, (OOOOF!) you know you've been pounced upon. When she got tired of running around the bedroom this morning, she parked right next to my head and purred directly into my ear. Don't have any facts to back it up, but I'd say her purr has gotta be in the top 1% for loudness.


It was time to feed the girls, so that was that.

Like I said, that's just one of the lessons our girls have taught me. Early on, they taught me something else quite interesting. You know those mega-sized rolls of toilet paper? Well, I learned that when one of them is unrolled onto the floor, it makes an ENORMOUS pile. It doesn't look terribly neat when you try to re-roll it, either. Especially with all of those shreds in it.

Now, the rain is still falling, and our kitties are curled up in the office with me. Sleeping. Ain't that the way?

So, what wonderful lessons have your pets taught you? Life sure wouldn't be the same without 'em. They fill our houses with hair, and our hearts with love and laughter. Doesn't get much better than that.

Until Monday, take care of yourselves. And each other.

Wacko news story of the week: There was a story on CNN the other day about the move to establish a "technological" sabbath, a day in which everyone would unplug from their computers, cell phone, I-Pods, and all of those other gadgets and gizmos that claim so much of our attention these days. The idea is to encourage everyone to re-connect with their family and friends. Sounds good, right? Here's the kicker, the part that absolutely cracked me up. There's a app to help you do it!
Posted by Susan Flett Swiderski at 1:47 PM

Email ThisBlogThis!Share to TwitterShare to FacebookShare to Pinterest
Labels: our cats, things my pets taught me, weird news stories