Thought for the day: Why didn't Noah swat those damned mosquitos when he had the chance? 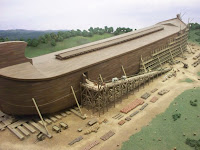 In fact, it's rained so hard, that gritty yellow-green car that's been sitting in our driveway got a decent cleaning, and whattayaknow? Found my little red car under all that pollen.

I know. Once the rain stops, the pollen will be back with a vengeance, but for now, the world is shiny and bright and new again. (On a Claritin day, you can see forever.)

When the cats aren't stomping on the keyboard or posing in front of the monitor, they're curled up nearby. Nothing new. Seems like they're always either taking a nap, looking for a place to take a nap, or just waking up from one. On this dreary rainy day, though, their curled-up contentment reflects and magnifies my own sense of well-being. I swear, they're the perfect poster girls for being tucked safely in the house on a wet chilly day. Looking at them makes me want to purr. Or take a nap.

But I like the rain. Yeah, we're getting close to the full mark now, but still. I like it. The way the air smells, the way it makes nature turn a brighter green, the way it sounds dancing on our metal roof. I like to walk in it, too, but hate umbrellas. Have a couple yellow fisherman's hats, and they suit me just dandy. Love to take long lazy rides in the rain, as long as I'm not the one behind the steering wheel. Love the rhythmic sound of the windshield wipers, and looking at the world refracted through the wet windows.

I even love thunder and lightning, and the fiercer, the better. Don't wanta be out there dodging lightning strikes, but love being the silent observer, watching from the safety of the house. Best storm ever was at a crabhouse in Maryland, right on the water. The wind whipped the patio furniture every which way, and the water was so choppy, it looked like it was boiling. Lightning reflected in the water. Awesome. 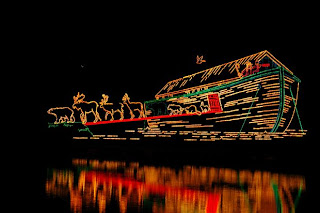 Yeah, it's still raining. But if I build an ark, I think I'll go with something a little more stylish. Maybe something like this. Neon's such a nice touch, dontcha think?


Ok, enough yammering about the rain.

There's something much more important to report. I'm lost. Doomed. Doomed, I tell you! I've discovered the attraction of Twitter, damn it. After all the disparaging remarks I've made about it, too. I did not know. I shot off my mouth, but I did not know. There are some really NEAT people out there tweeting. Smart people, funny people, professionals in the news world, in the literary world, in the world of science and technology, and probably in a kazillion other worlds I haven't yet discovered.

And ya know what? It's much easier to be clever in 140 characters or less than it is in a blog post. Go figure.

OK, so I've succumbed to the allure of blogging and tweeting. But I absolutely refuse to get sucked into online game-playing. Then, I'd be a goner for sure.

Ooooh, the sun is shining. Time to go look for a rainbow. 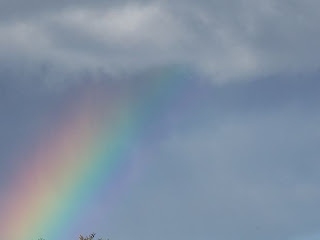 Found mine. Hope your day is filled with them, too. Until next time, take care of yourselves. And each other.


+++
No trees were killed in the sending of this message. However, a large number of electrons were terribly inconvenienced.
Posted by Susan Flett Swiderski at 3:05 PM