Thought for the day: It's hard to beat a hard boiled egg in the morning. 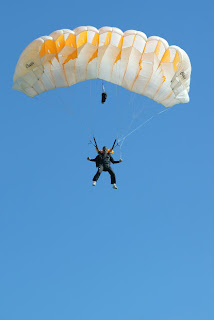 It was a little embarrassing to admit that I'd broken my foot by doing something as mundane, by doing something as stupid, as running into the leg of my son's bed. Hit that sucker with enough speed and force to darned near launch a 50-yard field goal, too. Not the smartest thing I'd ever done, but unfortunately, not the stupidest, either.

That was more than thirty years ago, but each time someone asked how it happened,  I'd go through my silly would you believe routine before admitting what I'd actually done. Now, I could make up some interesting would you believe story about why I didn't post anything on this blog yesterday, too, but the truth is actually pretty interesting.

The truth is, I was gorging myself at a smorgasbord. Really. I was like Oliver Twist, staring wide-eyed down an endless table of delights, holding out my bowl, and begging for more.

Only it wasn't food. It was blogs.

I sat down at the computer yesterday morning, fully intending to write a little something-something before heading out to run some errands, but I took a teensy little detour, and got hopelessly lost. You know how it goes. I was just going to do a quick check on a couple of my favorite blogs, and maybe leave a comment or two, but what can I say? One thing led to another. Next thing I knew, I was meandering through an amazing maze, going from one link to another to another to another. You know, click on a commenter's icon to read  his profile. Then take a look at his blog, and while I'm there, why not look through the archives? And oooh, look at all of the blogs he recommended! Might as well check out some of them, too.

A waste of time? I dunno; I enjoyed it. One thing I learned is that there are a bazillion fabulous blogs out there. A virtual smorgasbord, and considering the endless variety of choices that are available, I thank you from the bottom of my heart for stopping by here to sample my humble offering of yams. And an even bigger thanks to my followers. You guys definitely put a smile on my face.

Do you remember Shirley Temple?

She was an amazing child star, and the absolute epitome of golly-gee-whiz cuteness, with her bouncy blonde curls, chubby cheeks and deep dimples. In the 50s, after she was already a grown woman, my friends and I were still watching her old movies, still watching her sing and tap dance across our tiny TV sets. Most of my friends hated her, but me? I wanted to BE her.

In reality, my hair was worn in one of two styles, and I use the term loosely. Either it was straight and looked like Prince Valiant's do, which can be approximated by sticking a mixing bowl on your head and cutting around it, or it was tortured into a Little Orphan Annie frizz by virtue of a smelly home permanent. No sausage curls for me, bouncy or otherwise.

The singing I did okay. Never American Idol quality, but I could carry a tune. But dance? I could make my way around the neighborhood by walking strictly on top of the chain link fences, could climb the tallest trees, and could ride my bicycle down the multi-flights of concrete stairs by the elementary school without quite killing myself, but let's just say that I was never the most graceful kid on the block. I had two over-sized left feet, and my favorite aunt called me Lurch.

But one magical day, during one of our huge extended family gatherings, I made an amazing discovery in the shadows behind my uncle's cellar steps. 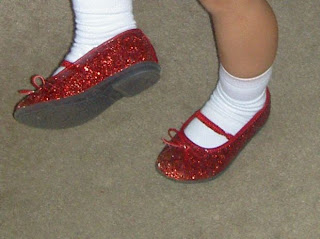 It was a bee-yoo-ti-ful  pair of sparkly red shoes. My cousin's long-forgotten tap shoes.

It took me quite a while to squeeze my feet into those tiny shoes. But I did it, and then in the shadows behind the cellar steps, I began to dance. Not sure it would've qualified as anything close to tap dancing, though. It was more like a Snoopy happy dance. If Snoopy had his feet shoved into shoes that were two sizes too small. Then, of course, I had to sing...  "On the Good Ship Lollipop". 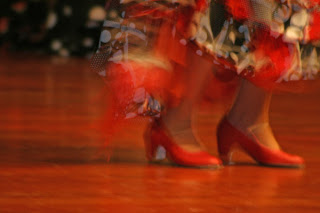 I was having a grand ol' pinch-toed time until some of my relatives found me. And laughed. Laughed until they almost wet themselves. (Did I happen to mention that my relatives were terribly rude?) Nah, it was all in fun, and once my mother helped pry my poor feet out of those shoes, the family continued to tease me about that adventure for many years to come.

Now, here I am again. Kinda hiding in the shadows behind the cellar steps, I started writing this blog a couple weeks ago. And little by little, people are starting to wander by. But I gotta tell ya, what's really fun about a blog is when it becomes a participatory thing. When you guys don't just watch, but strap on a pair of tap shoes and join the dance.

All you have to do is set up an account at  http://www.blogger.com/. You can add a profile if you'd like, but it isn't mandatory. Then once you have that account, you can work from there to leave comments on blogs, or even sign up as a follower.

So, come join me. I promise not to make you sing.

How about you? Who did YOU want to be when you were a kid? Besides Shirley Temple, I also wanted to be Dale Evans. That didn't work out so hot, either. I remember going horseback riding one time, and carrying a nice apple to feed my horse. Poor ol' thing didn't have a tooth in her head. Not positive, but I'm pretty sure Dale Evans' Buttercup had teeth.

+++
No trees were killed in the sending of this message. However, a large number of electrons were terribly inconvenienced.
+++
Posted by Susan Flett Swiderski at 12:17 PM