Step AWAY from That Toilet!

Thought for the day:  If you think alkaline batteries were named after a Tiger outfielder, you just might live in Michigan.


I've only been to Michigan once, and it was just for a long weekend. We drove all the way up there for a wedding, and then drove all the way back. Talk about a long drive. Matter of fact, the marriage didn't last much longer than our drive did.

But it was a pretty state. Lots of flat land. A sky so low, it looked like you could touch it. And for that outdoor September wedding in a gorgeous white rented tent ... it snowed.

One thing I find interesting about Michigan is its split personality. Parts of it are very big city-congested and dirty, while others contain lots of open spaces and beautiful Victorian homes. And moose. Let's not forget the moose. I'm not sure, but I think their idea of a seven-course meal up there is a six-pack of beer and a bag of smelt, and with all their cold weather and snow, they pretty much define summer as three months of bad sledding. They also have more than eleven thousand inland lakes, and the state abuts four of the five Great Lakes. Combined, that adds up to the longest freshwater shoreline in the world, which equates to lots of water activities, and lots of scenic lighthouses. In that picture of Lake Michigan above, the building you see is the Adler planetarium. The picture may be showing sunrise, but it sure looks like a gorgeous setting to me. 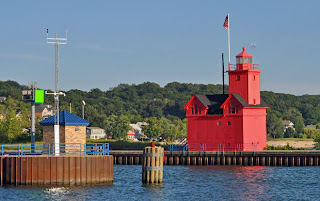 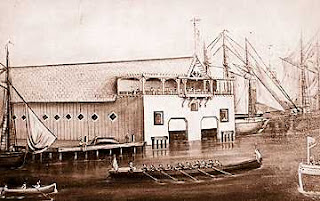 This old picture, circa 1878, shows rowers passing Detroit's Boat Club. This sure isn't an image I ever would've associated with Detroit. 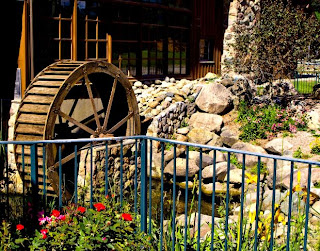 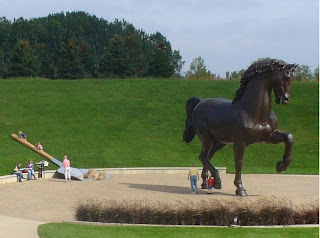 Grand Rapids is home to this 24-foot da Vinci horse,  the largest bronze sculpture in the western hemisphere. 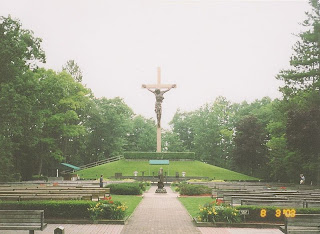 Indian River is home of the largest crucifix in the world. It's called the Cross in the Woods.

Michigan is the only place in the world with a floating post office. For the past 125 years, the J.W. Westcott has been delivering mail to ships while they are still underway. 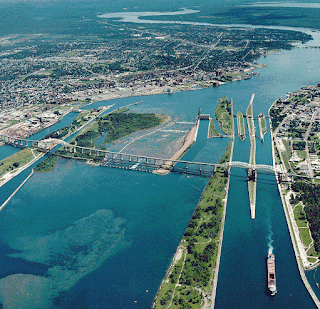 Allegedly, the Soo Locks, between Lakes Superior and Huron, passes more tonnage of goods than the Suez and Panama Canals combined. 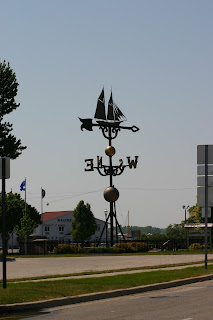 At forty-eight feet tall, with a wind arrow twenty-six feet long, and weighing 3500 pounds, Montague boasts the largest weatervane in the world. 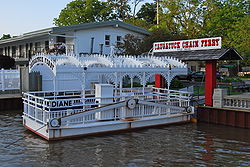 The Saugatuck Ferry is the only remaining chain-driven ferry in the world. It's actually hand-propelled. 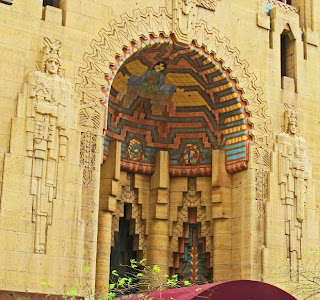 Detroit's Guardian building, built 1928-9, is nicknamed the cathedral of finance. Originally home of the Union Trust, this art deco building housed a number of other businesses over the years. It became a National Historic Landmark in 1989, and today houses mostly retail shops. Shown in the picture is this building's impressive main lobby. 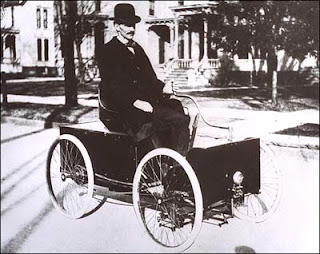 Michigan is, of course, known as the long-time car capital of the world. Shown in the picture is Henry Ford on a 1905 Quadricycle.

The Henry Ford Museum is located in Dearborn, and here's a brief tour of some of the totally cool vehicles that can be seen there:

Time to take a look-see to find out what kinds of nutty laws can still be found on the books in Michigan. 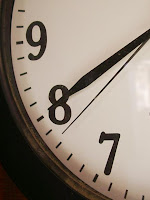 ***  I've heard of efforts to eliminate waste in the workplace before, but this is downright ridiculous. Picture this: flashing lights, a blaring alarm, and the loud admonition, "Time's up, you slacker! Get yer can off that can!" Okay, so that isn't exactly what's happening, but employees at a call center in Norway are being monitored by a high-tech surveillance system that triggers an alarm if they spend more than eight minutes of the workday in the bathroom. That's right. Evidently, flashing lights alert supervisors to the time-wasting  loo loiterers, but needless to say, the employees' union is protesting the crappy policy, and have high hopes this new intrusion into poo-break privacy will go the way of other failed means to control their potty habits. Last year, one Norwegian firm actually made female employees wear a red bracelet during their "time of the month" to justify more frequent trips to the bathroom. (Think they considered brown bracelets for employees with the runs, or green ones for tummy upsets and pregnancies?) Another company made employees sign a lavatory visitor's book, and still another issued electronic bathroom key cards. And here, I always considered Norway to be a bastion of freedom and individual rights. Turns out some of their companies have forgotten about man's inalienable right to sit on the throne. Hmmmph! I'm betting their bathrooms don't even have magazine racks.

*** Do you know what's in YOUR hamburger? It could be those old commercials demanding, "Where's the beef?" weren't too far off the mark. McDonald's has just magnanimously announced that it no longer uses ammonium hydroxide in its burgers. Let's break out the brass band. (In case you aren't familiar with that particular chemical, it's a pink slimy substance most commonly used in the making of fertilizers, household cleaners, and homemade explosives.) Although the company decided at the beginning of last year to discontinue the practice, they opted to be fiscally responsible by depleting the chemical stockpile it already had. (Money is money, right?) Took them until August to use it all up, but the company waited until just recently to make its grandiose announcement. McDonald's claims its decision to drop the process has nothing to do with the public campaign conducted by celebrity chef Jamie Oliver, who's been alerting the public about the use of this chemical and saying, "Basically we're taking a product that would be sold in the cheapest form for dogs and making it 'fit' for humans."  It may be true that negative publicity had absolutely nothing to do with the burger chain's decision to drop the use of this chemical, but personally, I hope the good chef continues his campaign about some of the other chemicals we unknowingly consume on a regular basis. (Like silicon dioxide and propylene glycol.) In the meantime, care to join me at the salad bar? 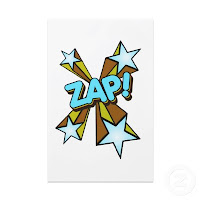 ***  Researchers at the University of North Carolina have determined that zapping testicles with ultrasound may be an effective male contraceptive. For men who may be wont to cross their legs and screech an ultrasound protest at the very thought of the words zap and testicles in the same sentence, fear not. I understand the procedure is painless. I mean, just think about a mammogram. It isn't as though this new procedure squeezes the sperm to death between two cold slabs of metal. 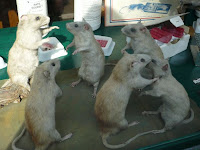 *** After taking pity on a pair of rats she saw in a pet store, a Boston woman purchased the cute little critters to prevent them from being served as some pet snake's main course. Now the rescuer is in dire need of rescuing. She needs to find homes for the rats. The prolific rats. All seventy-one of the not-so-damned-cute-anymore critters. Maybe she shoulda zapped their hairy little testicles with ultrasound, huh?