Touched By an Eagle

Thought for the day:  Celebrate your success and stand strong when adversity hits, for when the storm clouds come in, the eagles soar while the small birds take cover.

Some people think animals are a conduit between the physical and spiritual worlds. Native Americans strongly believe in animal spirits and animal guides.

Regardless of whether you believe in this sort of spirituality or not, if you've ever loved an animal, you're familiar with the special connections we can form with them. Most of us experience these connections with dogs and cats, or other domestic creatures.

Can you imagine connecting with a wild animal?

In Arlington, Washington is the Sarvey Wildlife Care Center. There, on a five-acre spread, volunteers rescue and rehabilitate orphaned, injured, and sick wild animals, mostly from the Puget Sound area, with the object of healing them and releasing them back into the wild.

I'd like to share with you a  remarkable story about one of the volunteers who works there, and the unlikely connection he's formed ... with an American bald eagle named Freedom. 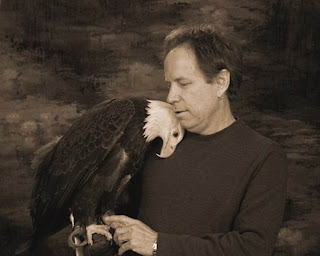 Jeff Guidry is one of the volunteers at the Sarvey Center. In 1998, when a fledgling bald eagle fell from its nest,  Jeff brought it into the center for treatment. The eaglet's badly broken wings were fitted with rods, but the bird remained in critical condition, and hovered near death for weeks. Every day, Jeff cared for this bird he'd named Freedom. He murmured heartfelt words of encouragement to the eagle, and willed him to live.

Finally, on a day determined to be Freedom's last chance for survival, the day he was to be removed from the feeding tube if there were no signs of improvement, the bird finally lifted his head, and slowly stood.

Freedom will never fly, and will spend the rest of his life at the center, where he and Jeff are an inseparable team, an educational team. It isn't unusual to see the mighty bird nuzzling with Jeff, as shown in the picture above. And it also isn't unusual for Freedom to put one wing around Jeff's shoulder in what looks like a gesture of friendship.

But that isn't the whole story.

In 2000, Jeff was diagnosed with cancer, an advanced cancer requiring eight heavy rounds of chemo. In an amazing role reversal, during the entire debilitating ordeal, Jeff sensed Freedom's constant encouragement, and felt the bird willing him to fight, and to live. On the day Jeff found out the treatment had succeeded, he and Freedom went for a walk. It was then that this mighty eagle wrapped both wings around Jeff in what must have felt like the protective hug of an angel. While enfolding Jeff in his wings, Freedom rested his beak on Jeff's nose, and for a moment, time stood still. Can you imagine the majesty of this experience?

Why imagine? Here, why not listen to Jeff tell you about it himself?

An inspirational story, isn't it? It sure sounds like a spiritual connection to me.