Thought for the day:  Clothes make the man. Naked people have little or no influence on society. [Mark Twain]

Most people know that Missouri is known as the Show Me State. That's right; no gullible fools there. So why has a Missouri town celebrated an annual sucker day every year since 1957?


Simple. Because it's not about P.T. Barnum's kind of sucker; this celebration's in honor of a bottom-feeding fish called a sucker. These fish aren't exactly universally appreciated, but they're certainly appreciated in Nixa, Missouri. Once a year, schools and businesses shut down for the day, and the town holds a big ol' sucker fish fry. Sounds good to me, no matter what kind of fish it is. Because, what can I say? When it comes to seafood, I'm (ahem) a real sucker.

Okay, just a couple tidbits before we look at some pictures. At the 1904 St. Louis World's Fair, when an ice cream vendor ran out of cups, he got a waffle vendor to help out by rolling up some waffles to hold the ice cream. Thus, (ta-DA!) the birth of the ice cream cone. And the city of St. Joseph has a couple unique claims to fame: that's the town where the Pony Express started ... and Jesse James ended. 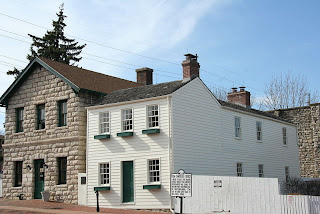 The Mark Twain Museum, located in Hannibal, is comprised of multiple buildings, including Twain's boyhood home, the Becky Thatcher House, Huck Finn House, J.M. Clemens Justice of the Peace Office, Grant's Drug Store, and a museum gallery. The white picket fence you see in the picture is (you guessed it) the Tom Sawyer fence. 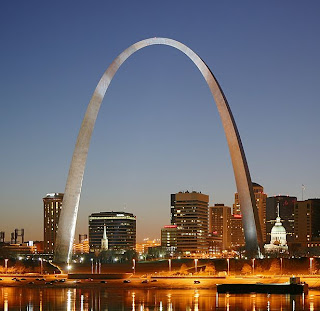 The most recognizable landmark in the state is probably the Gateway Arch in St. Louis. At a height of 630 feet, it's the tallest man-made monument in the country, and was built to honor the pioneers who passed through Missouri on their way out west. In east St. Louis is a more recent landmark: the Gateway Geyser fountain, which mirrors the arch by blasting water 630 feet in the air. (four times a day) 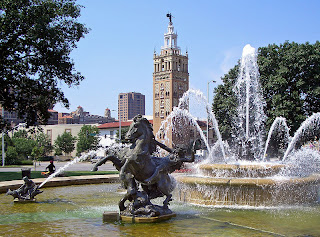 But Kansas City is the city for fountains. Second only to Rome in number, this city boasts two hundred of them. Pictured is the picturesque J.C. Nichols Memorial Fountain in Mill Creek Park. 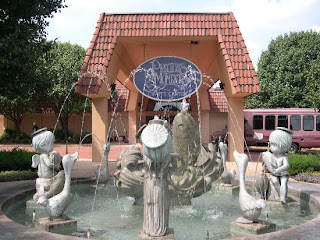 How about this? Would you believe a Precious Moments Park? Here, you'll see a studio, chapel, and lots of figurines. Betcha you can even find some for sale. 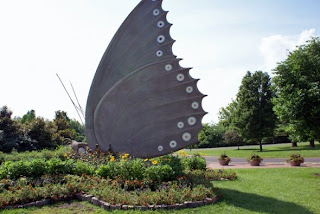 The Butterfly House is located in Chesterfield, where the conservatory houses nearly 2000 butterflies. The  sculpture in the picture is entitled Mysterious Monarch. [Artist Bob Cassill] 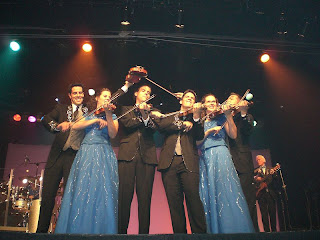 And then there's Branson, with all its tourist attractions and celebrity-owned theaters. Sounds like a cross between Grand Ol' Opry type music and Vegas style shows. The performers shown in the picture are the Duttons. I must say, I'm not familiar with them, but they definitely aren't the Rolling Stones. 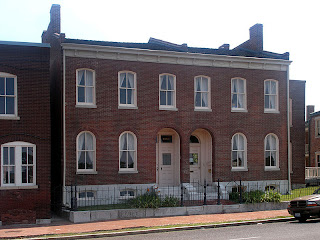 Sedalia is considered the cradle of classical ragtime music, and that's because Scott Joplin, the father of ragtime,  lived and taught here. At left is the Scott Joplin House.


Okay, time for a musical interlude. The Joplin tune you are probably most familiar with is The Entertainer, but here's a clip of another of his compositions, and that's actually him you hear playing the piano:

On May 5, 1945, Winston Churchill delivered his famous Iron Curtain speech at Westminster College in Fulton, Missouri. On May 6, 1992, Mikhail Gorbachev came to the same campus to give a speech, which he delivered beside the school's Winston Churchill monument. It was there that Gorbachev announced the end of the cold war.

When the Berlin Wall fell, Churchill's granddaughter acquired a piece of it for the school, and had a sculpture made to honor the Iron Curtain speech.

One last thing, before we go on to check out the silly laws still on the books. Would you like to hear a tidbit of that famous Iron Curtain speech?

Okeydoke, then. Let's have some fun with those laws, shall we?

And now, my little chickadees, it's times, once again,  for (ta-DA!) 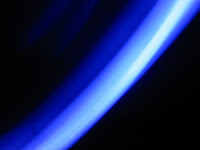 ***  Heck, I dunno. Maybe the guy has a keen imagination and thought he was wielding a light saber. And maybe he thought his jeans and tee shirt were actually Darth Vader garb. Whatever he was thinking, authorities have been unable to shed any light on the identity of the would-be robber who stormed into a San Diego gas station this week with a florescent light bulb in hand. He smashed it on the counter (maybe he couldn't get the darned thing to work) and demanded loot, but the clerk didn't buy into the fantasy. Not only did he not give the guy any money, but he hooted him out of the place and back into the dark, light bulb-less night.

***  This may look like one of the fake billboards I post from time to time, but nope. Not this time. This is an actual billboard currently strutting its stuff over the Bruckner Expressway in New York. And local residents aren't at all happy about it. You see, the Bronx area of Hunts Point, where the billboard is located,  has been trying to clean up its image as a hotbed of prostitution, and this billboard ain't exactly helping. This isn't the first time the vodka company stirred up controversy with their billboard, either; last November, that sign read, Christmas Quality; Hanukkah Pricing. Can't help but wonder what the non-PC company is gonna come up with next. May I suggest 1% Quality; 99% Pricing?

***  An impatient Porsche driver in San Francisco wasn't happy about being stuck in traffic, so he set out to do something about it. You've seen this sort of driver before; we all have. They're usually behind the wheel of a high-dollar car, and I suppose they figure they're above the mundane laws of the road governing the rest of us peons. Anyway, they generally have no problem making their own lanes. Like the privileged characters they are, they'll whip down the shoulder or emergency lane to get past the traffic jam, and then count on the kindness of strangers to let them back on the road. That's exactly what the Porsche driver tried to do, only the empty lane he claimed was empty for a very good reason. A nice, wet, freshly-poured concrete reason. The guy went from being merely stuck in traffic to really stuck. Workers had to dig the car out, and though the incident may have ruined that Porsche dude's day, I have a feeling the other snickering drivers and pointing passersby considered it a delightful case of poetic justice.