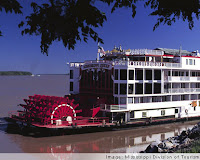 It's hard to separate Mississippi from the mighty Old Man River of the same name. Unless you're like that intellectually impaired beauty contestant who, when asked to spell Mississippi, screwed up her face in concentration before asking, "The state or the river?"

Just a couple quick tidbits before going on to the pictures. Didja know root beer has its ... uh... root in Mississippi? Yup. It was invented there in 1898 by Edward Barq. And didja know there's an International Checkers Hall of Fame? Me neither. But there is, and it's located in Petal, Mississippi, where they actually hold international competitions. Son of a gun. Guess there must be a lot more to the game than I ever thought. The Mississippi Gulf Coast is one of the South's most popular seashore resort areas. It stretches twenty-six miles, from Biloxi to Henderson Point, averaging two hundred feet in width, making it the longest and largest man-made beach in the world. Natch, all that water means lots of fresh seafood, too. And if you get tired of the sand, sun, and seafood, there's plenty of Las Vega style casinos there that are only too happy to separate you from your dirty ol' money. 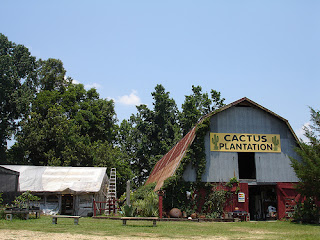 Edwards, Mississippi is home to the world's only cactus plantation. Cactus? Not exactly the first thing that comes to my mind when I think about a plantation, either, but what can I say? They feature more than 3000 varieties. 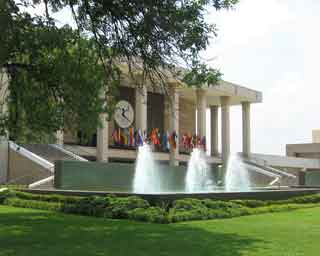 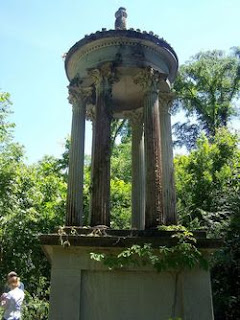 This is the grave marker for Captain Isaac Ross, located on his old plantation in Lorman. In 1834, he freed his 200 slaves, and in his will, arranged for his plantation to be liquidated, and the money used to send them to the new African country of Liberia. Although his family contested the will, in the end, his wishes were fulfilled. On his gravestone are the words His last will is graced with as magnificent provisions as any over which philanthropy has ever rejoiced and by it will be erected on the shores of Africa a monument more glorious than marble and more enduring than time. Guess what the former slaves called their new place in Liberia? Mississippi. And there, they built mansions like the ones they'd left behind in the United States. The plantation in Lorman, although in various stages of ruins, was purchased last fall, with the intentions of rebuilding and restoring it to its original splendor. 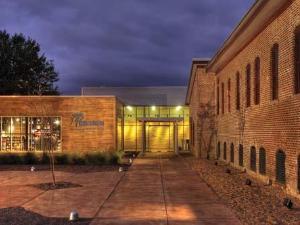 Fittingly, the B.B. King Museum can be found in the town where he was born: Indianola. The museum is straight ahead in the picture, and the building to the right is an old cotton mill. The Mississippi Delta is considered the birthplace of the blues. And B.B.? Well, he was ... the king.


How about a little musical interlude?  Here's a taste of  B.B. King's wailin' Delta blues:

Windsor, near Port Gibson, was the largest antebellum mansion ever built in Mississippi. Built in 1860, it survived the Civil War, but was destroyed by fire in 1890. Twenty-three columns are all that remain, and these Ruins of Windsor have been featured in numerous movies.


This is one of the markers at the Friendship Cemetery in Columbus, where "flowers healed a nation."  On April 25, 1866, the local ladies placed flowers on the graves of both Union and Confederate soldiers. This act of kindness led to what we now know as Memorial Day. 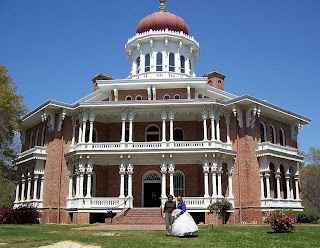 Longwood, built in Natchez circa 1858-61, is the largest octagonal house in the United States. It was originally designed by its owner Dr. Halder Tush Nash to include solar panels, strategically positioned mirrors to reflect the sun's rays to heat water. When the Civil War started, the Yankee workmen dropped everything and headed north. The house remains unfinished today, and tourists can see the workmen's tools still lying where they dropped them.

Okay, let's move along, and see what laws are still forgotten in the land of cotton and catfish: 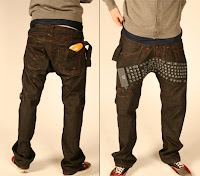 ***  These guys from the Netherlands may be brilliant computer gurus, but their sense of fashion leaves a little bit to be desired. Erik de Nijs and Tim Smit recently unveiled their new creation, which they've dubbed  Beauty and the Geek. It's jeans ... with a built-in full-size Bluetooth enabled keyboard. (Talk about a laptop!) Integrated speakers and a wireless mouse are included with the pants, and the invention works with a USB device and wireless connection. The idea is to allow users to walk around, but still be in control of their computer. Okay. Um, what I'd like to know is ... how do you wash these things?

*** A couple days ago, police pulled a car over not too far from where I live here in Georgia. The offense? Driving too closely to another vehicle. But as it turned out, riding a bumper wasn't the only crime being perpetrated. Police found a bumper crop of counterfeit Nikes in the car, as well. Seventy-eight boxes of them, which one officer immediately recognized as being fake. How, you ask? There was a little problem with the image of Michael Jordan on the boxes. It seems he had ... eleven fingers.

*** Man, is there anything you can't find in Walmart? How about a spouse? It worked for a couple in North Carolina, anyway. She was a cashier, and he was a customer. Now, they're man and wife. And they tied the knot right there. In Walmart. In layaway. And they're now spending their honeymoon in housewares. (Just kidding!) But ya know, come to think of it, if that store is open 24 hours a day, and has a grocery store, ya never know. 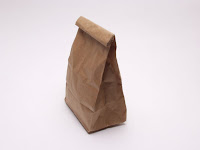 *** Not to pick on North Carolina, but ... well, okay, so maybe I am. An agent from the state's Department of Health and Human Services, who was inspecting a Raeford elementary school, confiscated a pre-schooler's lunch this week. She claimed it didn't meet USDA nutrition guidelines. And what terrible lunch did her mother pack inside of that paper bag? A turkey and cheese sandwich, (gasp!) a banana, (horrors!) potato chips, and apple juice. Criminal, huh? Oh, don't worry. The poor child didn't go hungry. She was provided with school-made chicken nuggets. And a $1.25 bill. Talk about invasive! The agent's superiors say they don't know why the lunch was confiscated, because it appears to have met the guidelines. Know what? Even if it didn't meet the guidelines, at what point did that agent have the right to stick her nose into that child's brown bag? Good thing nobody did that when my kids were in school. I probably would've been arrested. Not for the food, but for the contraband ... the stupid pictures, notes, and corny jokes I used to write on their napkins. (Ya see, some of them were in very bad taste.)


Until next time, take care of yourselves And each other.
Posted by Susan Flett Swiderski at 2:30 AM