Thought for the day:  I didn't get a toy train like the other kids. I got a toy subway instead. You couldn't see anything, but every now and then you'd hear this rumbling noise go by.  [Stephen Wright] 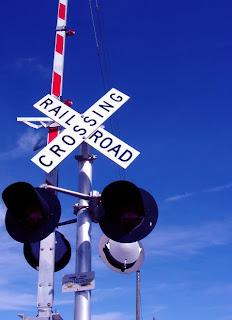 Do you like trains? I've always had kind of a thing for them, whether it be the real thing, the authentic to-scale workable steam engines a friend of ours builds, or the fantasy world of model trains.

Not far from my grandmother's house was an old-fashioned train crossing, the kind with a little bitty building sheltering an honest-to-goodness man, who'd emerge with his little red flag to stop traffic (all one of us) whenever a train was coming. He always waved and smiled at us, and sometimes there'd be another smiling, waving man standing out back of the  little red caboose, too, with a lantern in his hand.

Romanticized memories of lying in bed listening to the haunting sound of train whistles through my grandmother's open windows at night caused me to later suffer a severe case of temporary insanity, during which I thought it would be a swell idea to rent an apartment right next to some train tracks. Suffice it to say the BANG! CRASH! BOOM! steel-laden freight trains from Bethlehem Steel passing by around the clock, causing  mini-earthquakes in our apartment wasn't particularly romantic.

Anyway, not long ago, my husband asked me if I'd like to go to a train show. Not the box cars like we both used to climb on and jump (shhhh!) when we were kids, but model trains. All kinds of model trains. 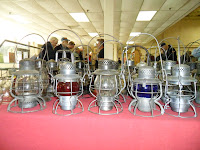 In addition to various gauge models, there were also a bunch of lanterns, the kind I remember those men holding on the cabooses so long ago. And there were sets of dishes from some of the old passenger trains. Lots of neat stuff to look at, especially all the model trains winding through their miniature pretend worlds.


The show included all kinds of neat displays (like a BUNCH of carnival rides) with movable parts, flashing lights, sounds, and some buildings so detailed, they looked like someone had zapped the real thing with a sci-fi shrink ray. Check out the details in this general store: 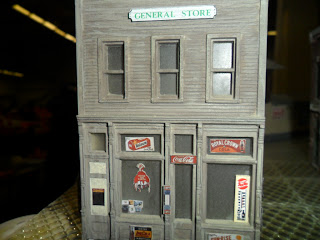 There were tiny gas stations with cars up on a lift, car shows, factories, water towers, a produce stand, diners and even a McDonald's. Lots of intricate details and bits of whimsy. If you've never been to a model train show and have the opportunity to attend, I highly recommend it. Take the kids and/or grandkids, too. (Children get in for FREE!)

Did you have (or do you still have) model trains? When I was a kid, a number of the fire departments in and around Baltimore set up an enormous Christmas Garden in one of their bays every year. Did the firehouses in your area do that, too? The Dundalk Fire Department, where I used to be mesmerized, stopped doing their Garden in 1978, but another fire department in the area took it over. This is a shot of the new garden. Looks just as magical. 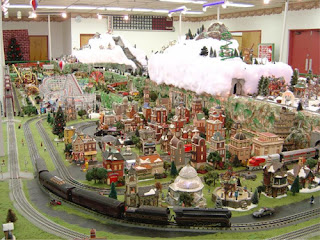 I even found some cool videos taken at the new garden. Here's one of them. Hope you enjoy it:

Time for a quick railroad story about customer service:

In 1895, after suffering a bunch of bedbug bites while trying to sleep in a Pullman Palace Car, an irate customer wrote a letter of complaint. Soon after, he received a very nice letter of apology from George Pullman's corresponding secretary, in which she thanked him profusely for alerting them to the problem, and explained how extremely rare bedbug bites were. She assured him the car had been properly fumigated and returned to service. The customer might have been mollified, had it not been for one mistake. The secretary inadvertently included Pullman's handwritten note, which read, Sarah, send this S.O.B. the bedbug letter.

Always make sure the light at the end of the tunnel isn't an oncoming train.